I mentioned Uprooted by Naomi Novik in my March Favourites post, as I absolutely adored it.  As you can see from the pictures, the dustjacket has become slightly battered while it lived in my handbag for several weeks.  I first read it all in one sitting, forgoing several precious hours of sleep, then went back to read it slowly and gradually drink it all in.

I read some of Novik’s Temeraire series a few years ago, which are an alternate history; essentially it’s the Napoleonic Wars except there are dragons and they’re like massive flying ships with crews and riggings and…I could go on for some time talking about how cool that idea is.  They’re very different in tone to Uprooted, but I recommend them! 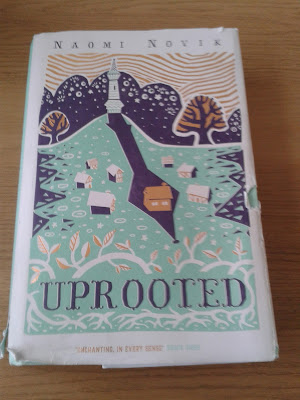 Uprooted is entirely original yet speaks to the childhood folk stories we all know but aren’t quite sure how.  It is witches in the woods, wizards in stone towers and the folly of blind love.  More than anything this book is about truth, and acknowledging the ugly parts of yourself and others, and knowing that although they exist, they are far outweighed by the good.

This book is a subtle examination of the selfishness of humanity combined with the unknowable aspects of nature that for a long time were a central part of our lives.  Uprooted speaks to an older part of our minds, the part that fears the dark and the cold.  I cannot recommend this book more.  It doesn’t read as pretentious in the way that so much fantasy does these days, instead it is friendly, easy to read and worth every second you’ll spend on it.  It will draw you in, and you won’t want to leave, even if you know you should.

You should check out some of my other book reviews if you enjoyed this one!