I was very lucky as a child to have regular holidays that allowed me travel all over Europe. After a pretty disastrous Butlins holiday my Mum booked herself, my brother and I onto a cruise around the Mediterranean in the hopes of having a holiday sans a falling down chalet and an invasion of Canadian Geese. We ended up going on at least one cruise for the next ten years of my life and I’ve now been on 17 cruise holidays, which is frankly bonkers. 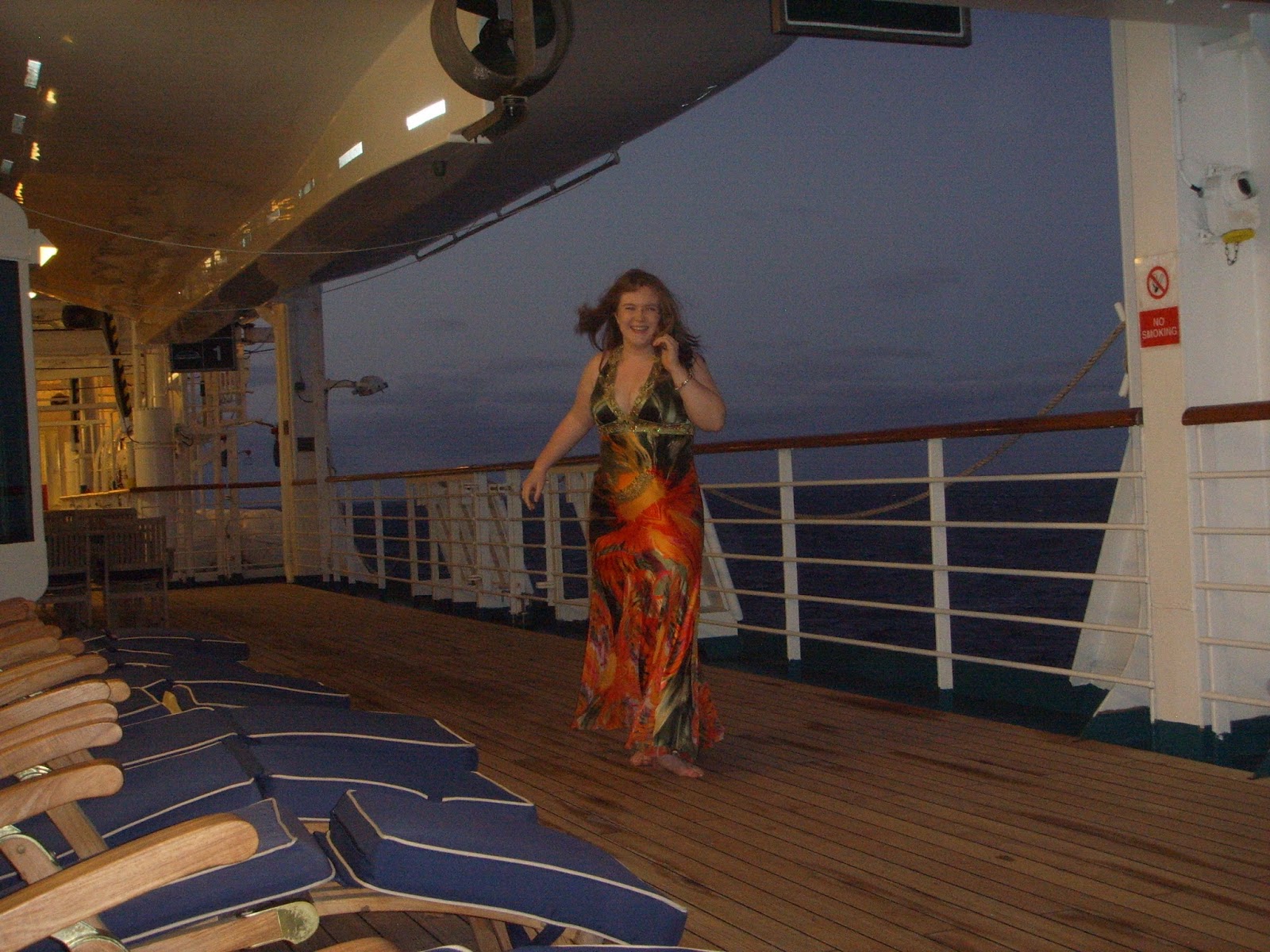 Cruising gave me my love for good food and dressing up, honed my love for travel and other cultures and made me fall in love with the sea. Cruising isn’t for everyone, and I don’t think it’s right for me now; I want to explore places I visit more thoroughly than I can in a day and I’m aware of the environmental problems associated with cruising. However, as a child it was perfect; my brother and I ran wild and joined in with the kids’ clubs, while my Mother lounged by the pools and was waited on hand on foot for a change. As a single mother to two rambunctious and very different children it was definitely what she deserved. My grandparents and some family friends often joined us and we’d all have a riot, going our own way while ashore or at sea then meeting for a formal dinner. I learnt the slightly more advanced table manners I take for granted, and my proclivity for chatting with every senior citizen and crew member I encountered probably explains why I get along better with people who are a lot older than me. These holidays massively shaped who I am as person in a way that I only realised while writing this post. This wasn’t even what I wanted to write about today, I actually wanted to tell you about some of the happiest times in my life which were spent on these giant floating hotels, primarily on the Promenade Deck.

Sea days usually went like this. After a very large breakfast, usually involving a plate of sausages, hash browns and bean followed by a bowl of fruit and yoghurt, I’d head out onto the Promenade Deck with my Grandad to read. My Mum would probably already be by the pool and my Nan with her. My brother would likely be in the kids’ club and raising hell, or else in the arcade shooting zombies. My Grandad would be safely installed on a reclining chair facing the sea, and I’d have settled into my book. After a hundred pages or so I’d decide to stretch my legs and go for a wander around the deck. One lap would turn into five, five would turn into ten and ten would turn into twenty until I was walking for miles. I’d walk and run in short bursts, occasionally leaping into the air in a vain attempt to reach the lifeboats suspended above the deck. At seven-years-old I never came close, and I still didn’t at twenty-one. 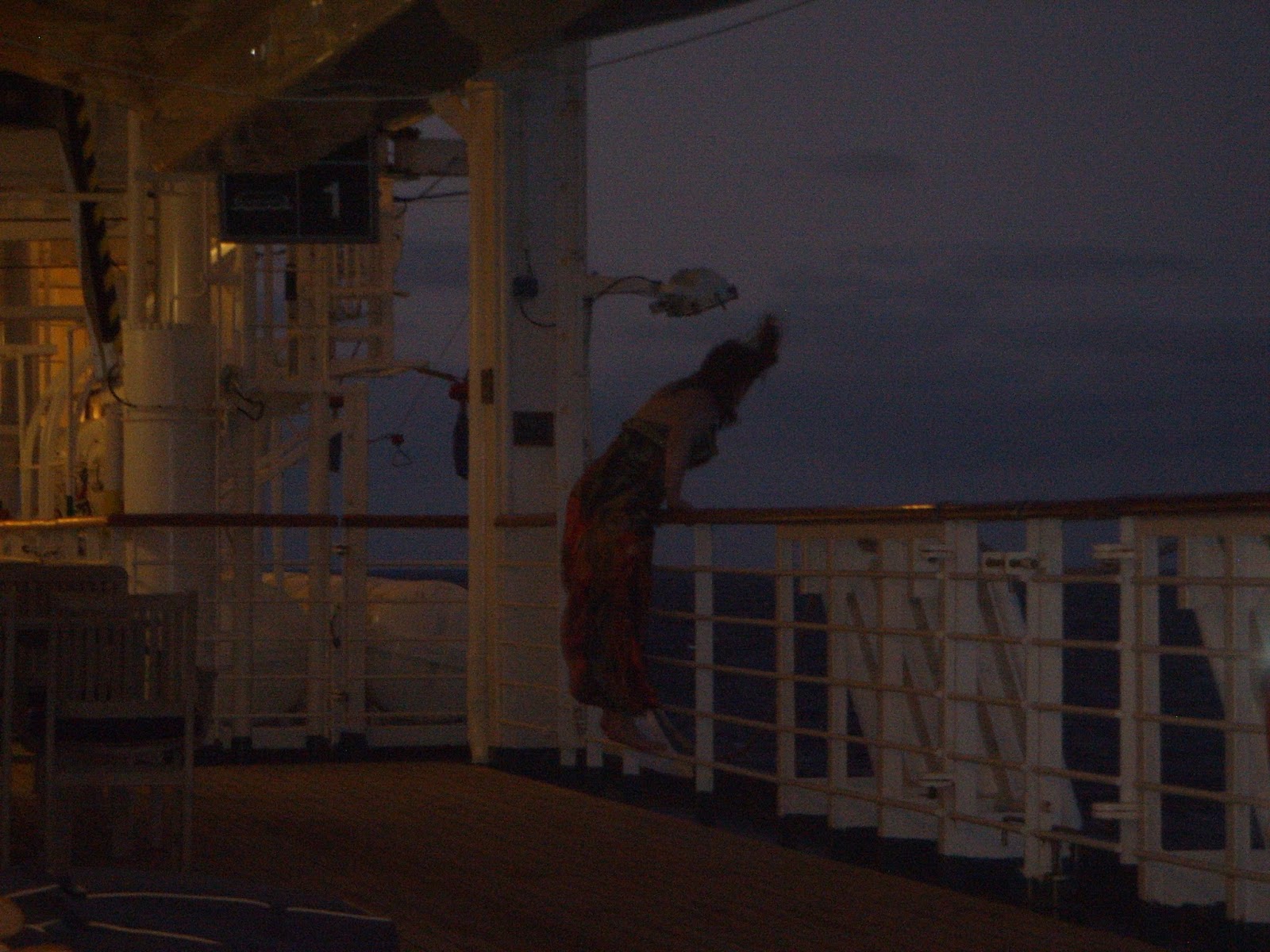 Walking the Promenade Deck became a ritual for me; whenever we were at sea I would do laps of the ship for at least half an hour, stopping to chat to the elderly people who tended to sit there. It was a quiet part of the ship with views of the sea and there were always friendly elderly people to chat to. They’d challenge me to do a lap as quickly as possible and I’d set off sprinting, accompanied by cheers as I legged it past their sun loungers. I was a rarity there; where other children generally kept to the kids’ clubs I tended to hang out with the old people, hearing their stories when I stopped to say hello. I remember an old American man telling me about his time in Vietnam, an elderly lady telling me all about her extended family and bringing several photos the next day to show me. There was the lady who was a dolphin trainer as young woman, the lady who made munitions in WWII and her husband who delivered the post to the front lines. I met people from all walks of life, from people who had worked their way up from nothing to a woman who assured me she was a Baroness. I remember a lady crying quietly while I ran laps one time and stopping to ask why, in the innocent way only a child can. She told me all about her late husband and how much she missed him. I didn’t really understand, but I remember holding her hand until her daughter came and they left together. I talked to people about what they were reading and where they were from, and it gave me insight into how other people lived now and in years gone by. I was precocious and friendly, and I befriended a lot of people very briefly. I enjoyed the snapshots of their lives they gave me, and I think they just enjoyed talking to someone who actually wanted to listen.

There were two elements for my love of walking the deck: talking to people and experiencing the sea. I say experiencing because it’s nothing like standing on a beach or paddling in the shallows. I only learnt the word for it in university, but numinous pretty much sums it up:

I felt a very strong connection to the sea and the wind, standing at the rear of the ship with nothing but a fence between me and the whole of the Mediterranean. I’ve always loved windy days, and they’re a permanent fixture while at sea. From talking to people this doesn’t seem to be a universal phenomenon, but does anyone else get that little voice in their head telling them to jump? Standing on the edge of the ship, staring down into the churning waters below, I always thought about how it would feel to dive deep into the sea. I’d observe the ripples of the ship’s passage smooth out and disappear into the distance, see dolphins leaping along by the prow and watch whales with wonderment. I often wondered what it would be like down in the depths. As a young child I was half convinced I was a selkie, a figure of Celtic folklore that takes the form of a woman but turns into a seal. It sounds bizarre writing this down, but walking the Promenade Deck, talking to old people and drinking in the sea air were some of my happiest moments in life. The photos in this post are from when I was about sixteen, and after dinner one night my Mother and I went for a walk on the deck. I, probably high on sugar from the several scoops of chocolate ice cream I’d probably had for dessert, took my heels off and ran several laps in my evening dress. You can tell how much fun I’m having. As much as cruises aren’t for me anymore, I really miss the sea. I miss being in the middle of it, I miss the sense of smallness in me and the overwhelming sense that there are things out there that are bigger than me; the feeling that there’s always somewhere new to sail to. 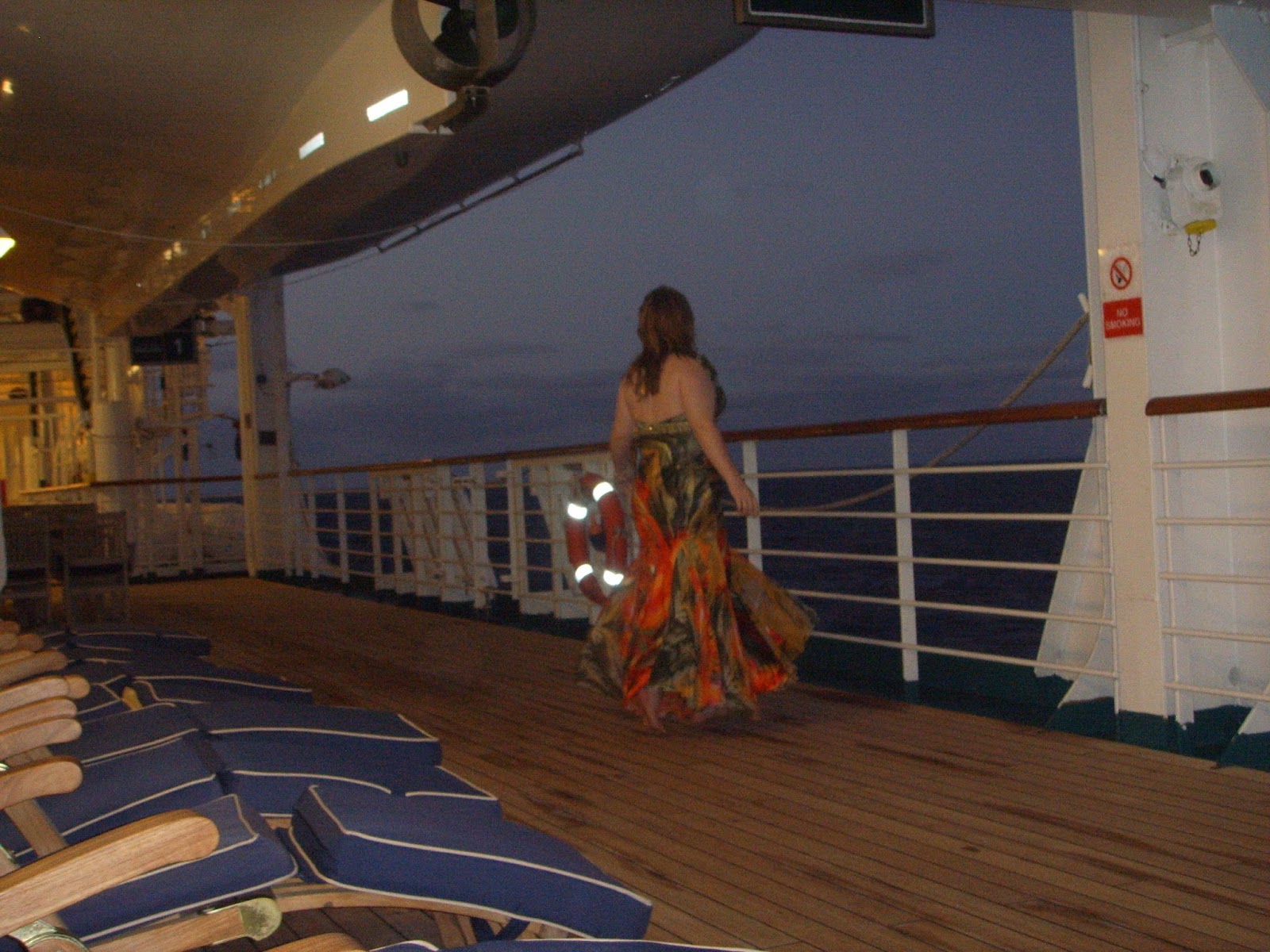 I really enjoyed writing this post, reminiscing about some of the happiest moments of my life. I also loved my post about Wellington Harbour which is a similar memory. They’re quite personal and almost difficult at times, as I struggle to convey the emotions of those moments in time. In my head I have a little series of posts like this planned, with over-arching theme of ‘moments of joy’. That sounds a bit sappy to be the actual title, but it’s what I’m writing about. Hope you enjoyed reading this as much as I enjoyed writing it.