The Nemesis Charm by Daniel Ingram-Brown is the second book in the Firebird Chronicles, and is due to be released on 27th May 2016. 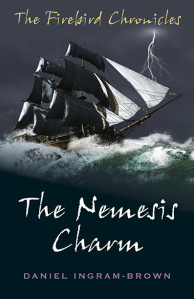 The Nemesis Charm’s target audience is probably young teenagers but I still found it an enjoyable and easy read as an adult.  It follows the characters of Scoop and Fletcher in the fictional world of Mortale where they study as Apprentice Adventurers at Blotting’s Academy.  Simultaneously we have Libby, a young girl in Leeds who is determined to continue her missing Mother’s story; the story of Scoop, Fletcher and the Storyteller.  The real strengths of the book are in the world Ingram-Brown has created and in the characters of Fletcher and Scoop.  Fullstop Island and the Oceans of Rhyme are part of a rich tapestry of which we see only a little.  The world clearly has a great deal of depth to it, and we have only glimpsed the surface.  Hints of far off lands and traditions demonstrate the richness of the world, and I’m looking forward to learning more about it as the Firebird Chronicles continue.

Fletcher and Scoop themselves are well written, both with sufficient flaws and individual motivations that lend the story realism.  Libby is a wonderful character, as her grief is increasingly evident throughout the book.  She clings ever more tightly to the world of Fletcher and Scoop we begin to truly understand her loss and desperation, evoking real sympathy in the reader.

The book is slightly let down by the pacing, as although the plot is sound, it takes too long for anything much to happen, and then everything happens at once.  I enjoyed the sense of forboding that builds in the middle of the book, and heightens until the climax, but the ending itself was disappointing.  While several of the plotlines are clearly going to be tied up in the next book, which I have no problem with, what this book did wrap up felt very rushed.  A little more build up to the resolution would have been welcome; as it is, I was left thinking ‘wait, was that it?’

One of the best things about this book for me is the confusion between fact and fiction.  I couldn’t quite tell for some time whether or not the world of Mortale was solely in the stories of Libby and her Mother, or whether it had gained a life of its own.  Libby is the source of this confusion, as she knows that she is writing the story, but Mortale and its inhabitants seem as real as Northern England; her fear that she is slowly losing her grip on reality is a constant worry.

I haven’t read the first book in the Firebird Chronicles, Rise of the Shadow Stealers, but I really want to.  There were lots of little references to it that I think would make my inevitable reread of The Nemesis Charm even more enjoyable.  I suspect that the finale that I was so disappointed in would have been better had I known more about the character involved, and I know they are a bigger character in the previous book.

If you like your stories with a dash of pirates, adventure and just a touch of blood magic (and who doesn’t?) then you should definitely give this a read.

The Nemesis Charm will be available on the 27th May in both hardcopy and eBook.  There’s also a launch event at Waterstones in Leeds.  If audiobooks are more your thing the first book in the series, Rise of the Shadow Stealers has just been released.  The author’s website has details of all of the above.

*I was asked by the author to review this book, but all opinions are 100% my own.