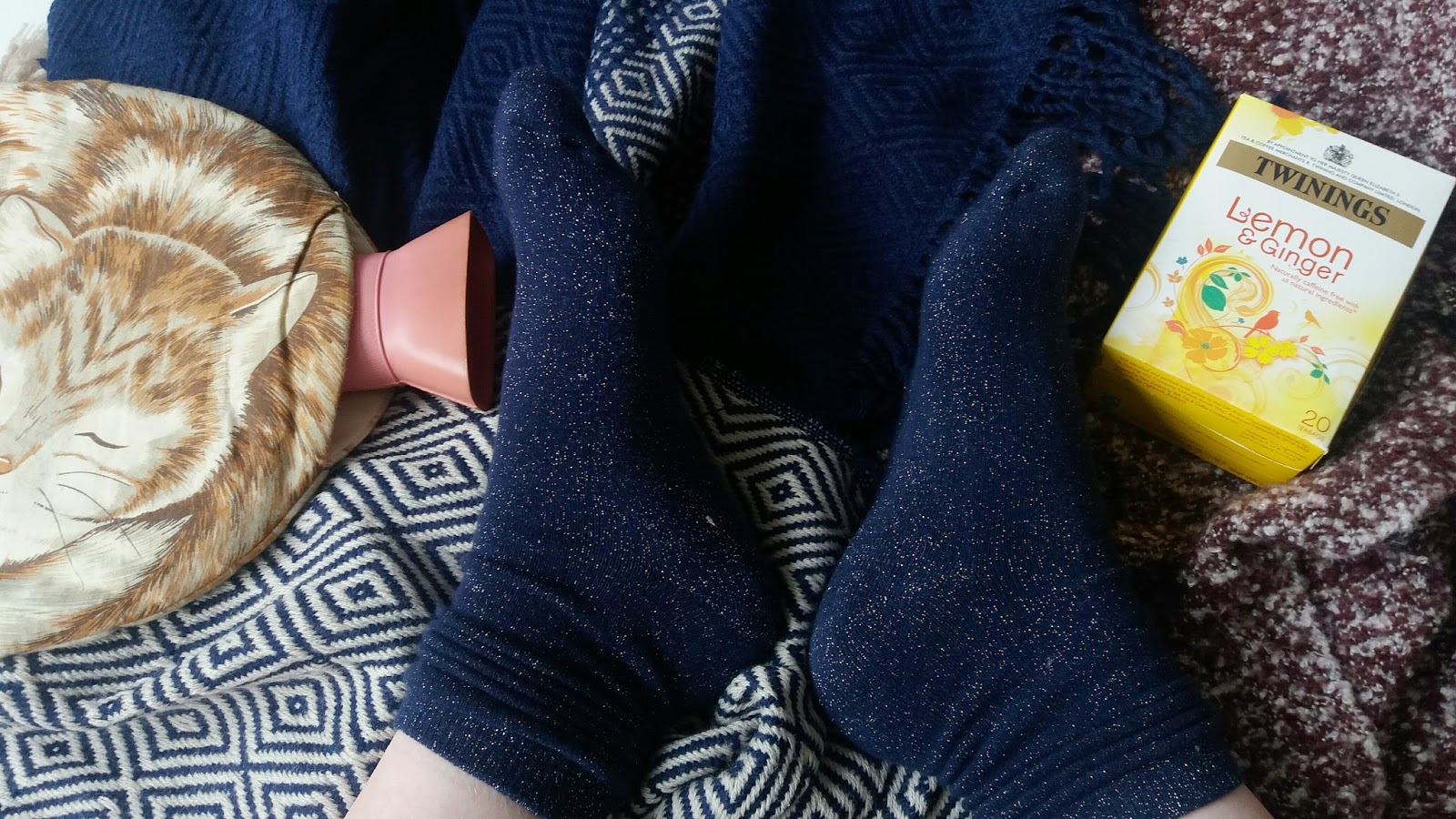 Since I started my new job in the bonkers month that was November, three months have passed. This means I am no longer in the probationary period and can finally tell the boss exactly what I think of him with no repercussions without being fired (1 – that’s not how it works, and 2 – what I think of him is that he’s adorable and just kinda love him in a non-creepy way). Unfortunately, in that time period I’ve been ill several times. The best thing about the new job is the boss (💓💓💓) really doesn’t mind if you’re ill, or even mind if you haven’t actually done any work for a solid week. As a result, I’ve got sick days down to a fine art, and I think I’ve figured out exactly what I need to make flu/a chest infection/really bad period cramps bearable. Take note folks because I’m about to give you some super obvious ways to hygge the crap out of your sick days.

I recommend public transport and an office environment. Trams, train and buses are perfect for this, especially in the winter months. Daily exposure to sneezes, coughs and slightly sticky handrails is guaranteed to at least give you a cold for a few days. Combine that with an air conditioned office full of tired, sniffling office workers and you’ve got a recipe for at least a few days of glorious illness-ridden days off.

Ideally you want to build up to being off sick, rather than just call your boss on Monday with a weak-sounding excuse – you want it to sound believable, because if you’re anything like me you’re going to stress about them not believing you even if you’re genuinely ill. Start out with some coughing, maybe buy some medicine and swig it periodically at your desk, and if your boss is the observant sort he’ll already have it in the back of his head that you’re not feeling your usual incredible self.

You probably struggled through at least a day of feeling pretty pants, and have concluded that you really don’t feel up to going to work today. The phone call to the boss can be critical. You want to sound convincing, but not so much that he’s going to think you’re dying. Sounding ill can be difficult if you’re not working with a cough. I recommend a croaky voice and general tone of misery and you should be fine. If your boss is as much of a babe as mine, he’ll tell you not to come back until you’re feeling better, which is perfect, because that’s what you were planning on doing anyway.

STEP FOUR
SNUGGLE TIME
First up, you’re going to need some supplies. Hopefully you already have these in, otherwise you’re going to have to make a very sad and sickly trip to the supermarket unless you have an accommodating friend/boyfriend/housemate. You’re going to need all the bog-standard cold and flu medicine you find, as well as a nice warm drink to perk you up. I recommend the Twinings Lemon and Ginger tea for when you’re all bunged up; I find it clears my head (and sinuses) enough that I can actually think. You’re also going to want to grab basically every soft furnishing you can get your hands on. I’m talking pillows, blankets, duvets, big fluffy scarves – the whole shebang. Transfer all of that your sofa and swaddle yourself like there’s no tomorrow. You want to be at peak comfiness, with no little gaps for pesky cold air to get in. Bonus points if you can afford to turn the heating on, but if you’re a fellow poor millennial the blanket step is extra important. A hot water bottle is my failsafe for when I’ve got a shivering-fever; mine is older than I am, having pinched it from my Mother’s house. Everyone should have a hot water bottle because sometimes your bed is cold and boiling a kettle is cheaper than turning the heating on for several hours.

STEP FIVE
TV TIME
Sure, the tea has enabled you to string a sentence together, but you’re still not feeling fantastic. What you need is a day of vegging out on the sofa, drowning in blankets, watching something you know and love. I‘ve been watching Merlin on Netflix, as I haven‘t rewatched it since it was first on, and damn, it was time I did so. I’ve very much been enjoying falling back in love with the cast (the knights 😍), and it’s been perfect for sick days. It’s familiar enough that if I doze off for a few minutes I still understand what’s happening and old enough that the plots feel fresh and I don’t remember what’s going to happen all the time. 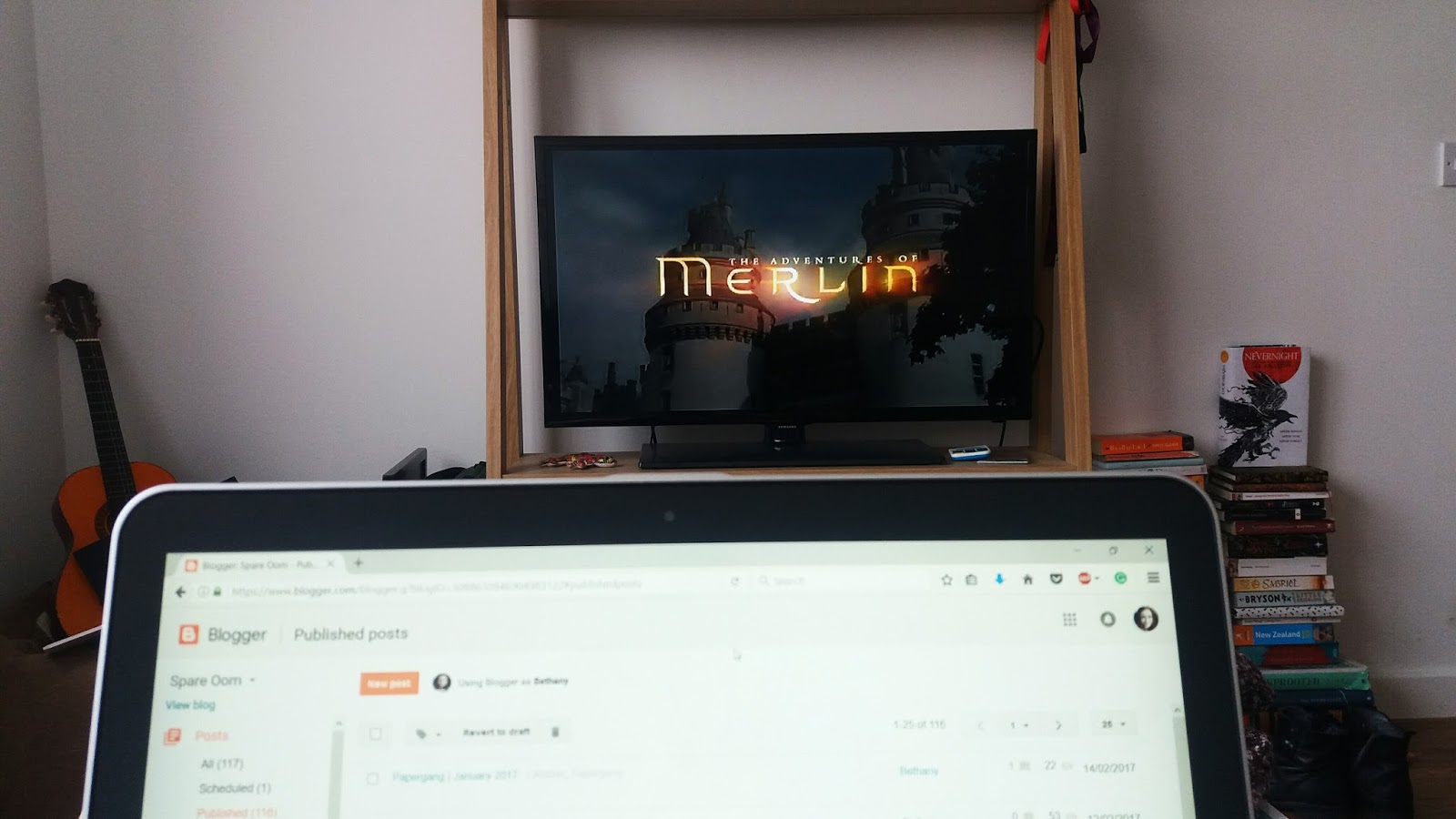 STEP SIX
EAT WELL
While you may be tempted to reach for the popcorn and chocolate, don’t do it. If you’re anything like me, you always feel crappy after eating junk food, no matter how much you enjoy it in the moment. Instead, I reach for something comforting but healthy-ish, and my answer to that is cheese on toast. Good quality mature cheddar cheese, a little wilted spinach and a tomato and chilli relish smeared on seedy bread. DELISH.

STEP SEVENSLEEP
When you‘re sick, sometimes the best thing you can do is rest. You’ve already made up your sofa so that it’s even comfier than your bed, you‘re full of cheesy goodness and you have your favourite teenage TV show playing softly in the background. If you don’t fall asleep and wake up 12 hours later then I don’t know what else to suggest, except your Nan’s sleeping tablets (don’t actually do that last one). Hopefully by the time you wake up you’ll be feeling fresh as a daisy, or at least less like death would be preferable to your current snotty existence.