Once again I spent a good portion of my paycheque all at once! Some of these things were sorely needed, others…not so much. This month I bought a few bits of homeware and fashion as well as beauty, and I think that those are actually my favourite purchases. 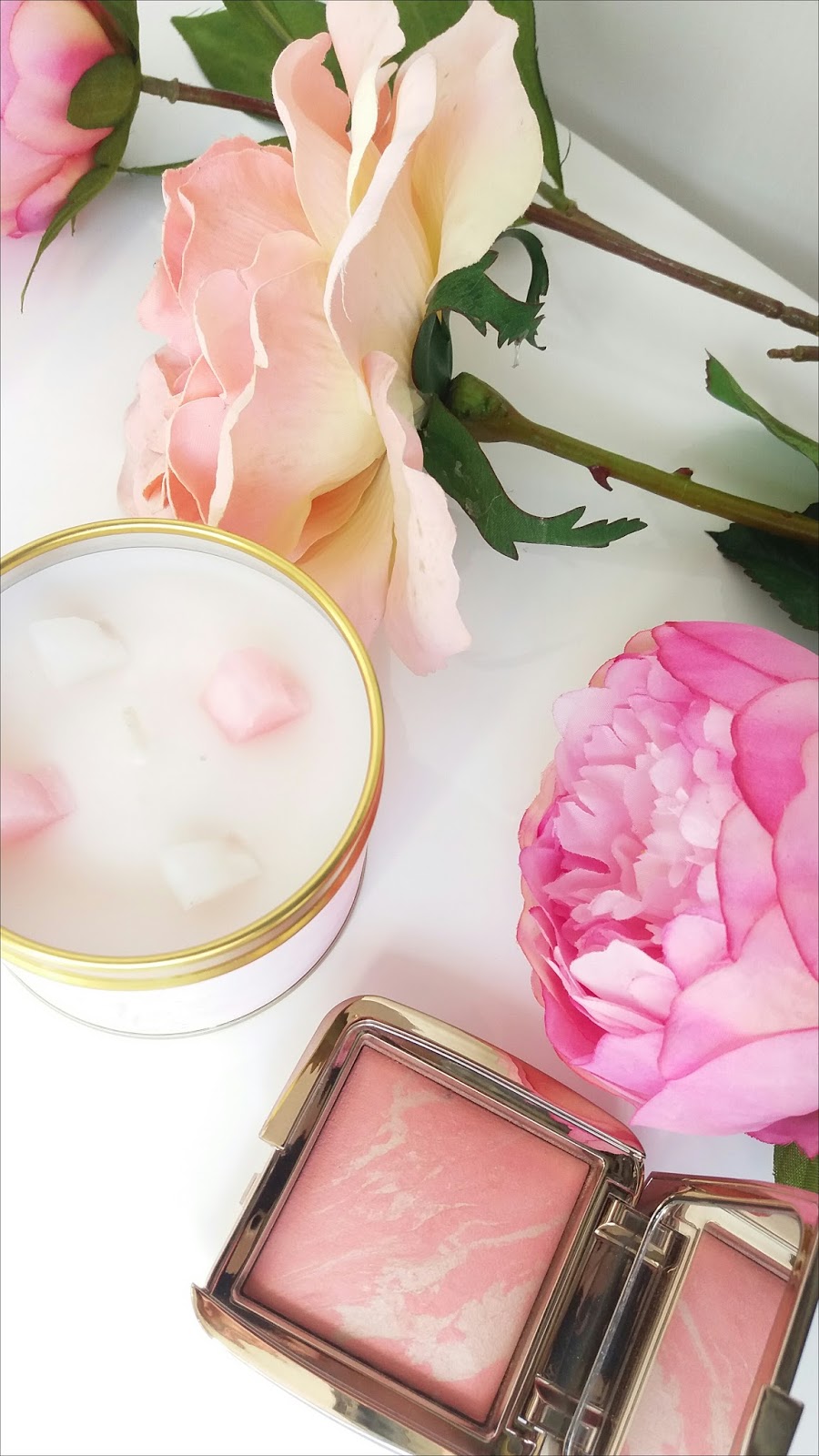 I owned exactly one blush up until this shopping trip. It was the BareMinerals Ready Blush in Aphrodisiac, and I love it. I‘ve had it longer than I care to admit, and it‘s still going strong. I take the use by dates with a pinch of salt for powder products but am a lot stricter with liquid products. I think my Mum actually picked this out for me yonks ago, which dates it immediately. It’s a gorgeous peachy coral, but I was starting to crave something different. I ended up choosing the Hourglass Ambient Lighting Blush in Dim Infusion, which is, again, coral, but is mixed with Dim Light to create a soft glow. That makes it entirely different to my old blush, or at least that’s what I’m telling myself. Regardless, it’s lovely. 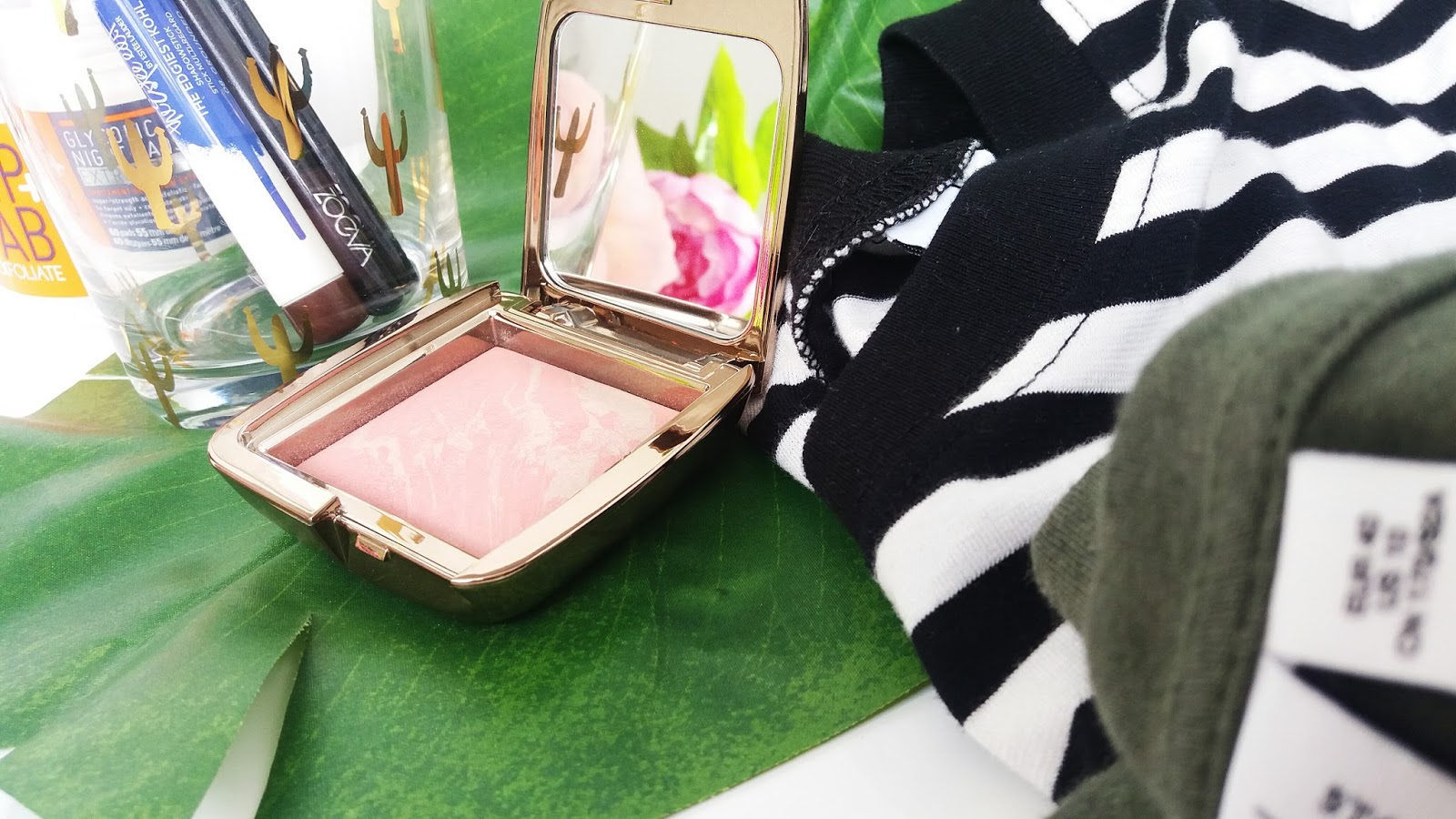 Much as I love my faithful Becca Moonstone, I was getting a little tired of the pale gold and was craving something a little closer to my skin tone. Enter the Becca Shimmering Skin Perfector in Pearl! It literally has no pigment, which isn’t far from my skin tbh. It’s a translucent shimmer, meaning it isn‘t too dark for me! Moonstone is always a little bit of a gamble for me as I have to be pretty light with it as it really shows up on my pale skin. Pearl is the perfect solution as it‘s basically just super reflective particles that I can dust across my cheekbones and nose without making my skin look muddy or like I’ve dunked myself in glitter. 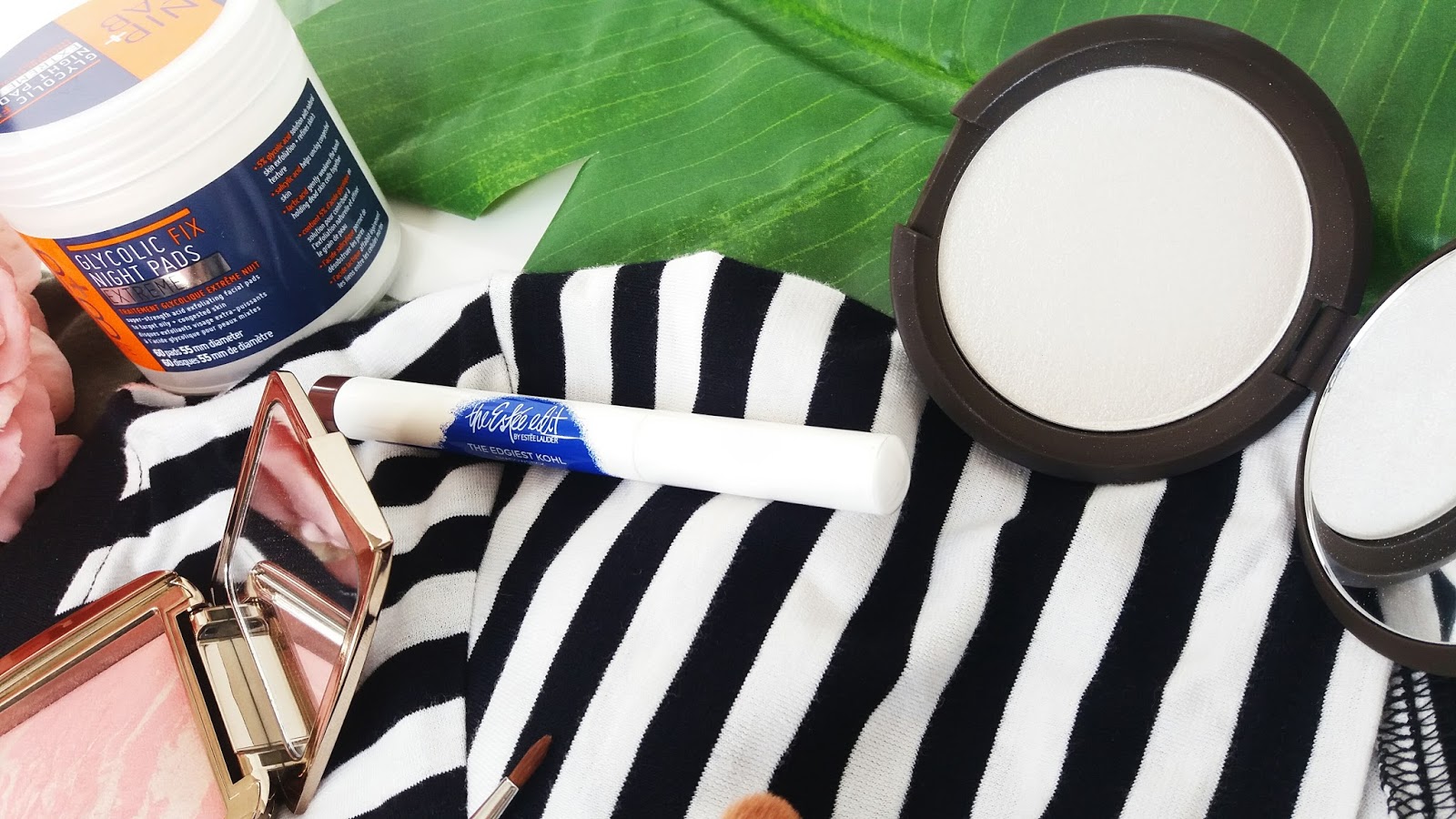 I’ve been in need of some more eye brushes for quite some time, and I finally took the plunge and decided to try some of the Zoeva brushes. I absolutely love Zoeva’s eyeshadow palettes, and their brushes get even better reviews, so I was dying to try them. I bought the Luxe Soft Definer Brush and the Classic Liner Brush. They were the two that I really needed, as my current liner brush was pants. It was RealTechniques, which are usually decent but this one was way too soft for applying any kind of gel. I only bought it after I lost my favourite MAC 210, which I’m still gutted about. I got the Zoeva brushes in the black, as I think it’s the most classic finish and that I would tire of the Rose Gold or Bamboo eventually. I’m chuffed to bits with them and they have genuinely improved my life so much. The Luxe Soft Definer makes blending a dream, and I’m finally using my favourite MAC gel eyeliners now that I have a decent brush again. 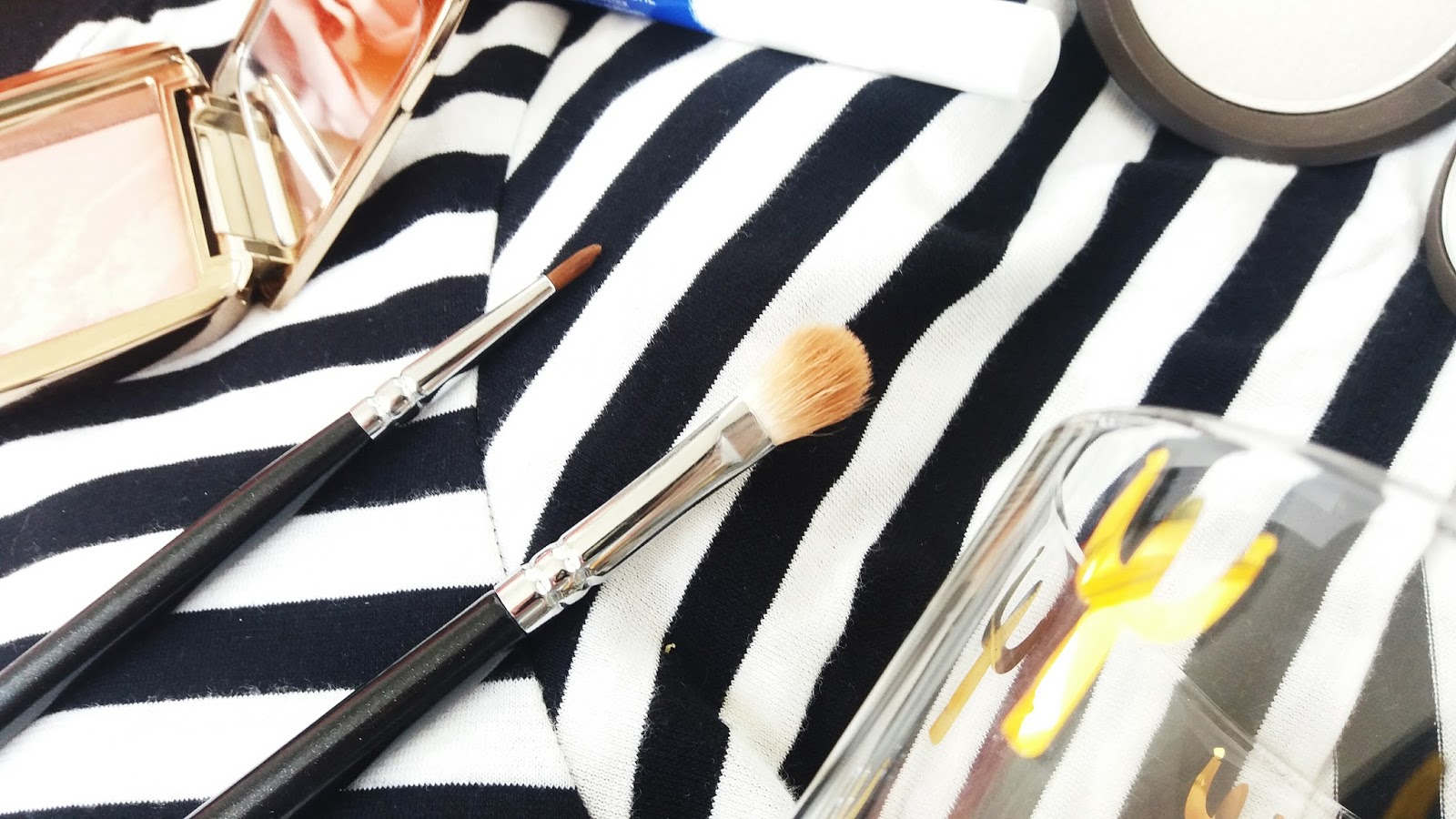 I bought this Estee Edit The Edgiest Kohl in Grounded as I’ve been struggling with eyeshadow of late, as I mentioned in my March Makeup post. This is a matte brown, and I won’t talk about it much here, as there will be a post all about my cream eyeshadow stick later this month. The shade is described as a pearlised chestnut brown and can be used as a shadow, primer and eye liner. 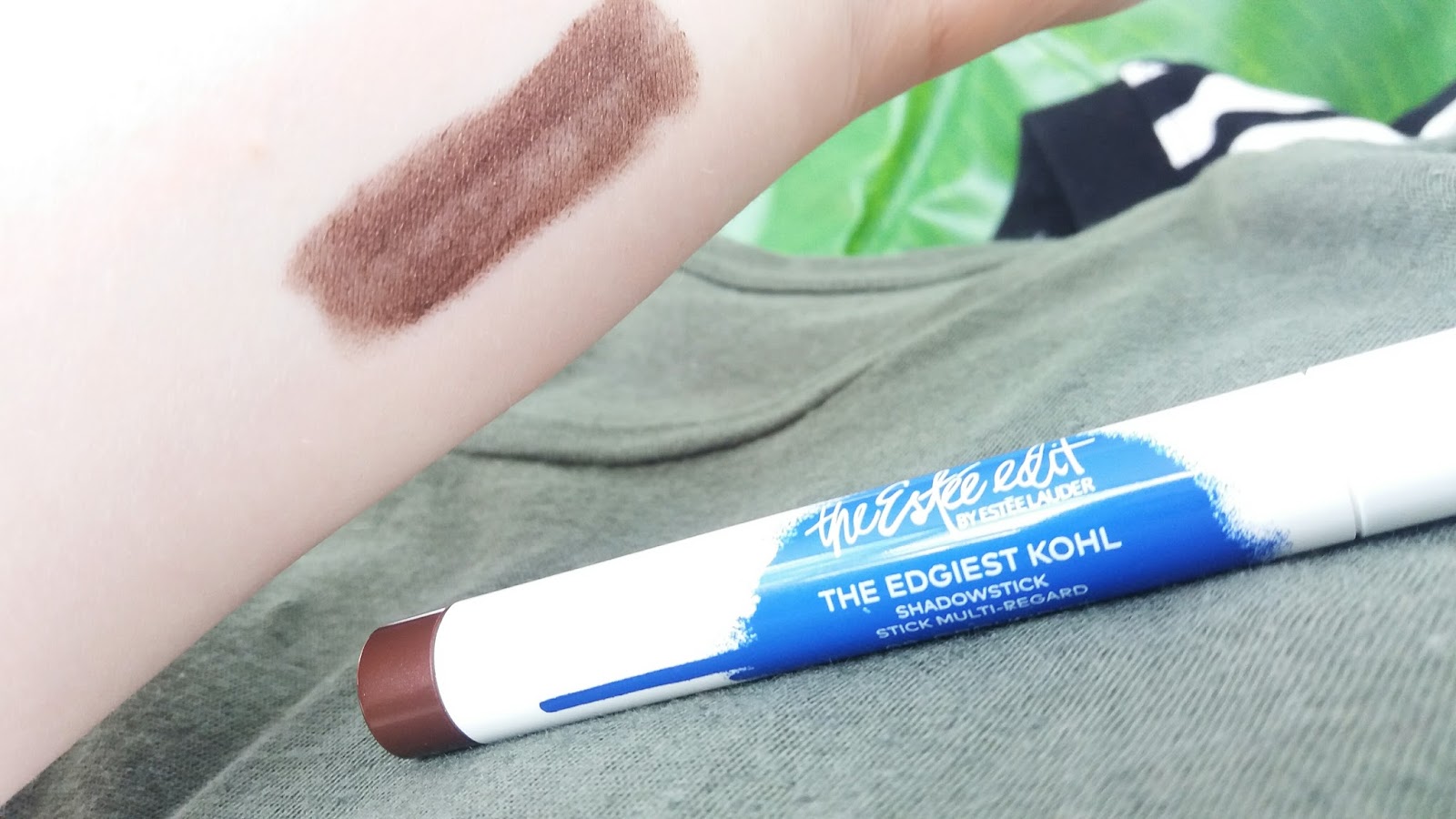 As I‘m currently battling all manner of skin issues, I recently bowed the almighty skincare Queen Caroline Hirons‘ wisdom and invested in a daily exfoliator. I struggle with dryness and acne, and the Nip & Fab Glycolic Fix Night Pads Extreme sounded like just the ticket for that combo. Unlike a lot of chemical exfoliators, this contains salicylic acid as well as glycolic, lactic and mandelic. It’s been helping a hell of a lot with my acne resurgence, and I’ve given up the prescription cream I was given in favour of my own skincare routine and it seems to be working a treat. Plus, they were (and still are) half price in Superdrug. 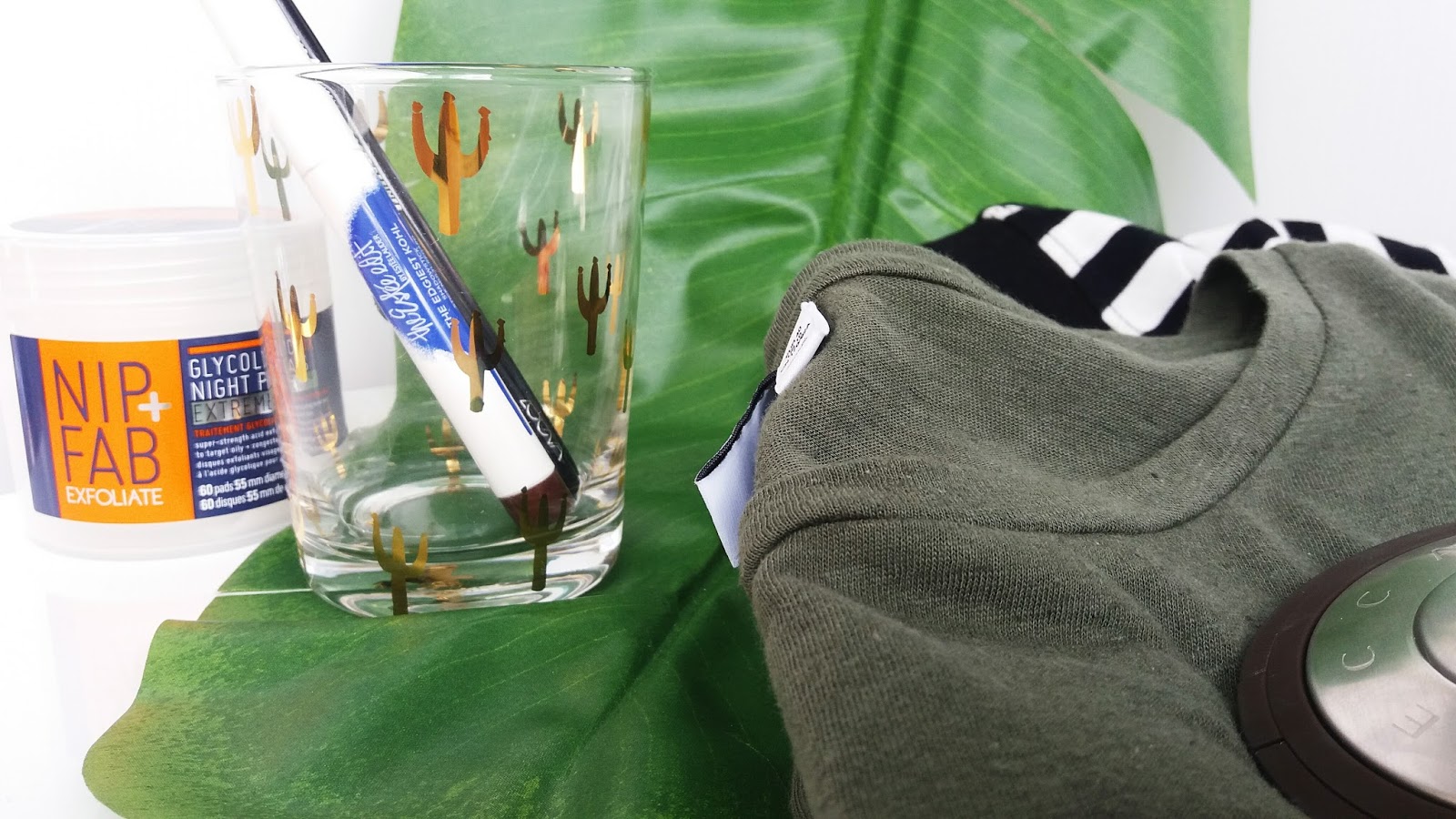 We’ve had a spate of warm weather in the UK, and I was caught wholly unprepared for it. I own(ed) one t-shirt that I liked, and it was only the pattern that I was fond of. It’s an old synthetic one from ASOS and I sweat like a pig when I wear it, but you can’t tell because of the print. I decided it was about time I bought some t-shirts that I actually like and am comfortable in, so I headed to & Other Stories. I bought two t-shirts, one is a khaki 70% cotton and 30% blend in an oversized fit, which doesn’t seem to be on the website, and the other is a more fitted 100% cotton black and white striped dream. I’ve worn them pretty much non-stop since I got them, workplace dress code permitting. 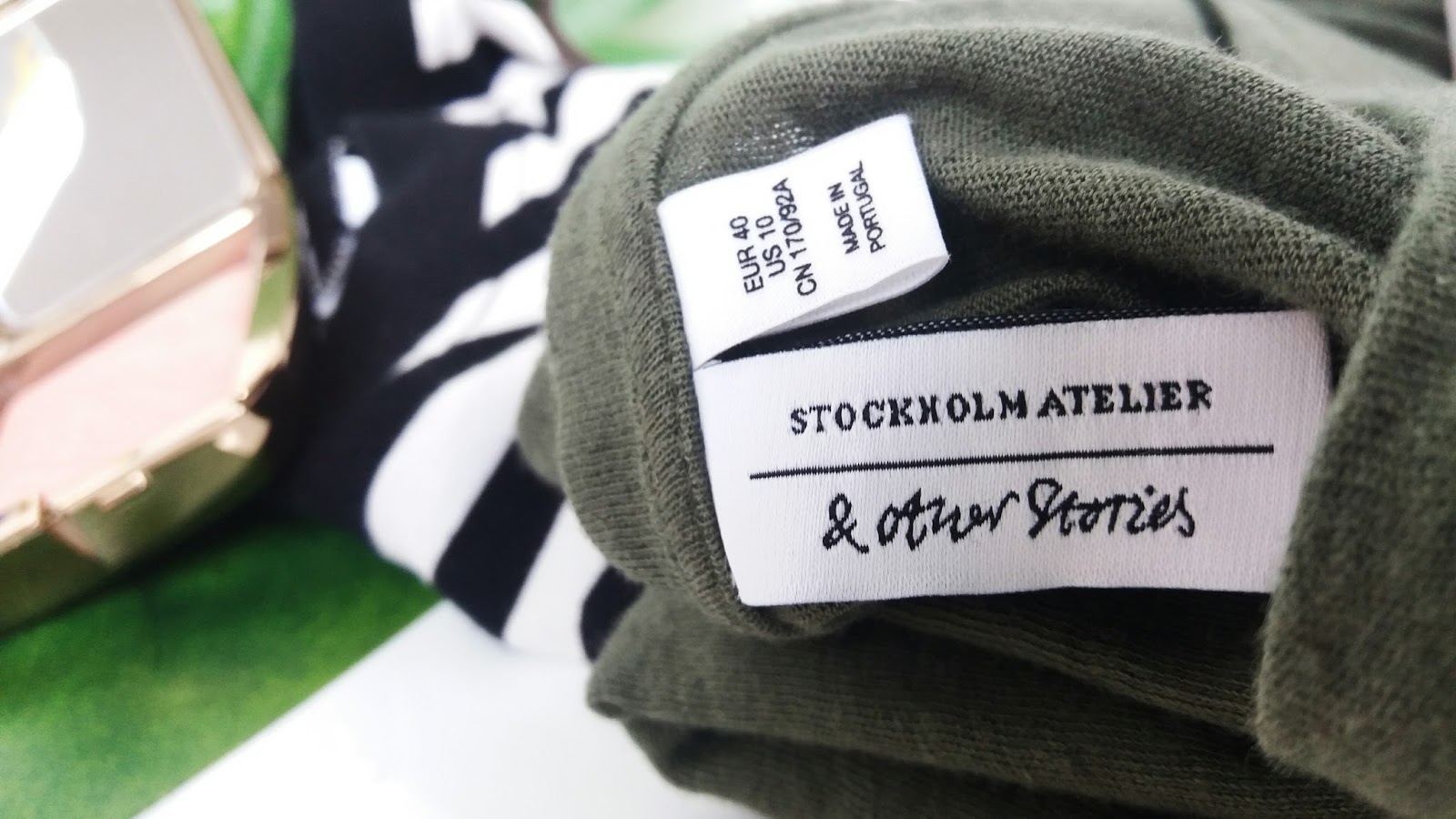 Oliver Bonas is my new home, and my aim in life is to gradually purchase their entire stock. I’ve started small with two of these gorgeous gold cactus print tumblers. I now refuse to drink out of anything else. 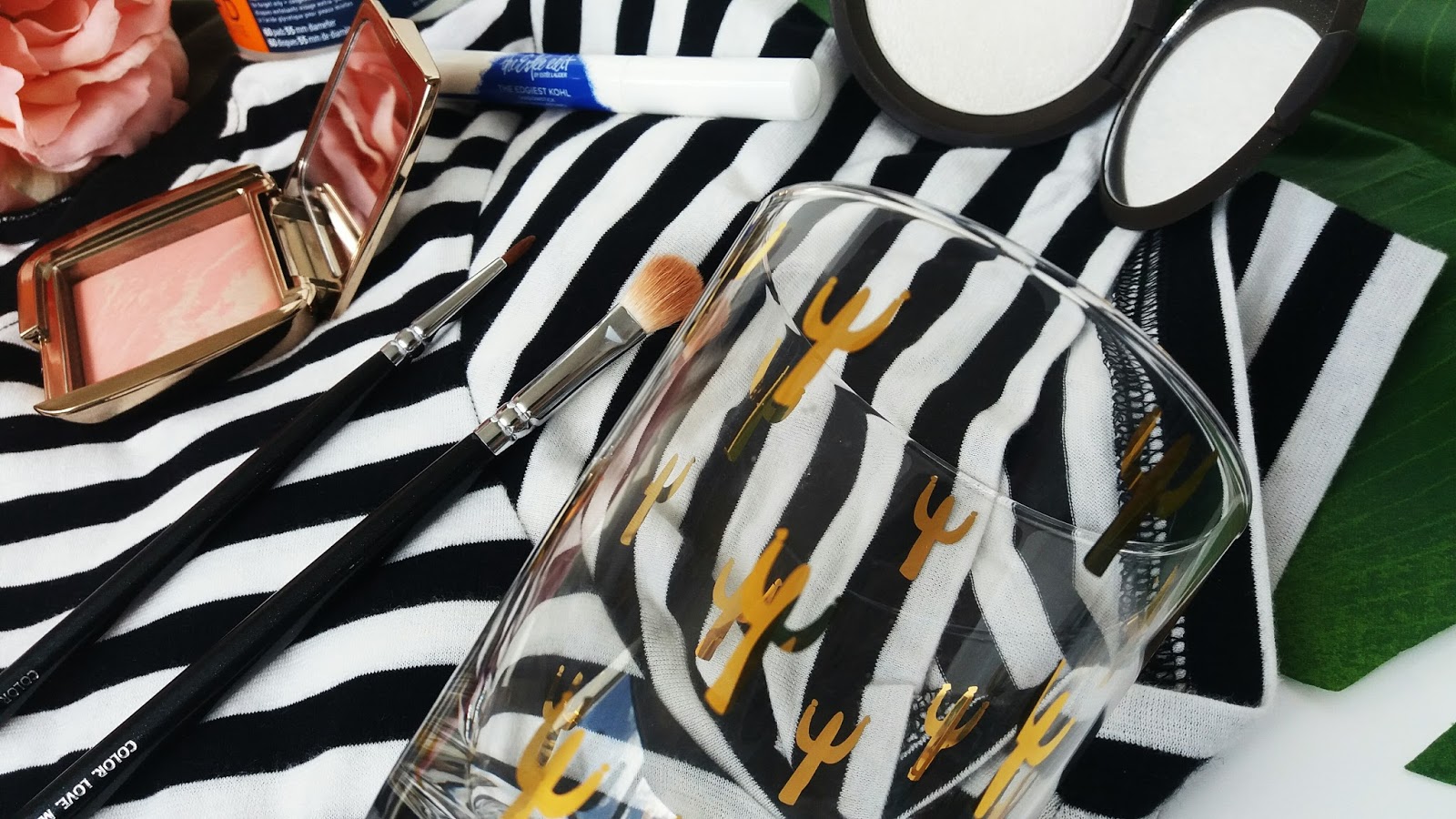 The boyfriend and I went for a wander around the Northern Quarter on Friday, and we popped into the iconic Oklahoma, the place to find all manner of interesting nicknacks. I bought this cute candle, which smells lovely. I had to look past the slightly twee name (Fairy Dust), but I do love the look and smell of it. It’s sweet, but not overly so, and is quite fresh; very Spring–appropriate. 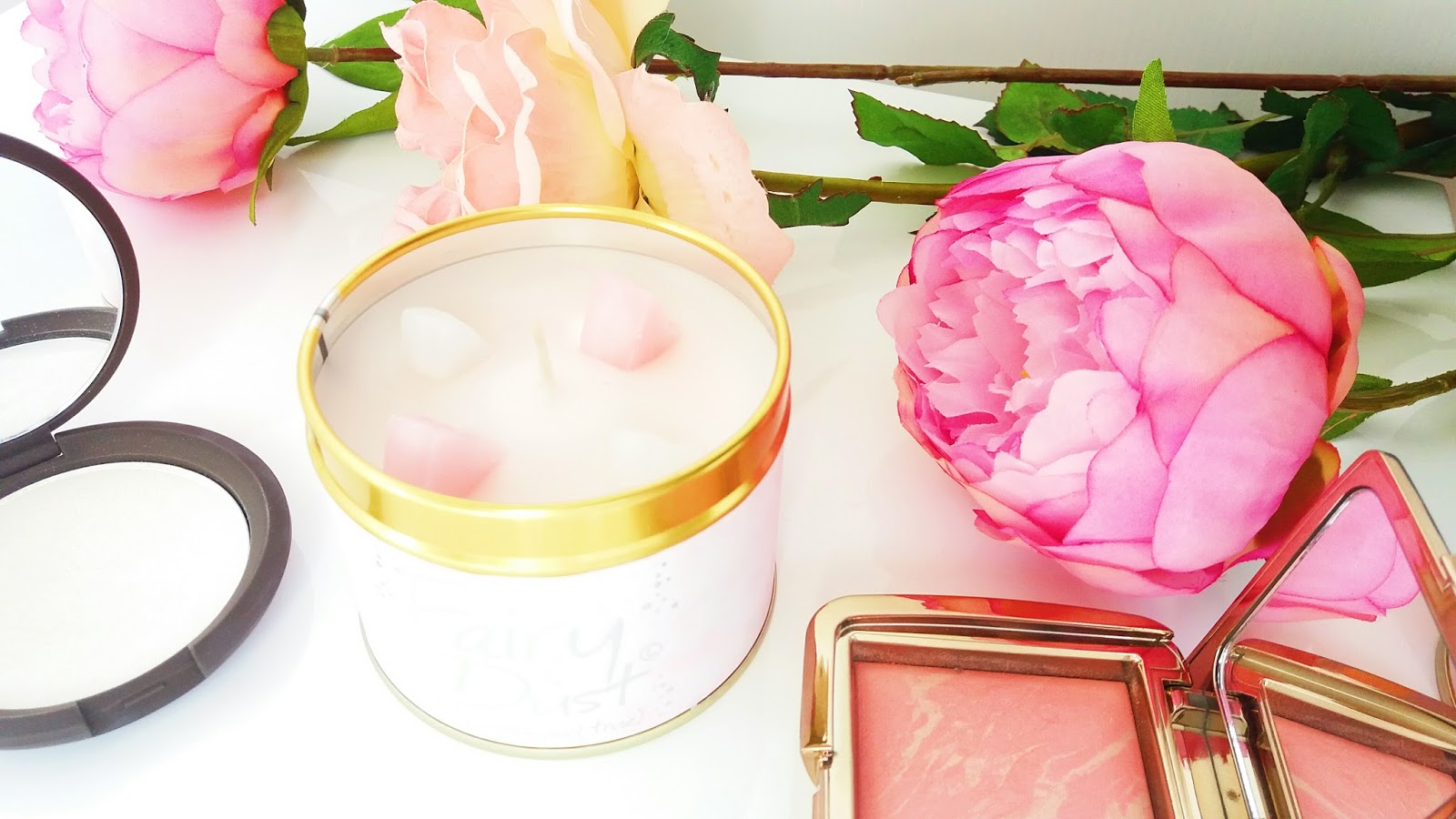 Going forward I’m putting myself on a beauty spending ban except for absolute necessities (like if I run out of moisturiser). I just spend so much money on things I don’t strictly need and don’t use what I already have. I want to focus more on my flat (basically I’m switching lipstick for pretty cushions) and making that feel more me, while working on how I feel internally. I’m not happy with several aspects of my appearance, and makeup is a bit of a crutch for me. While I usually use makeup to enhance my features and give myself a little boost, lately I’ve been using it as a distraction from the fact that I feel chubby or the skin problems that I’ve had lately. I want to cut down on my makeup spending for my bank balance and concentrate on my environment, both internal and external. That’s some hippy dippy shit but I’m going with it. 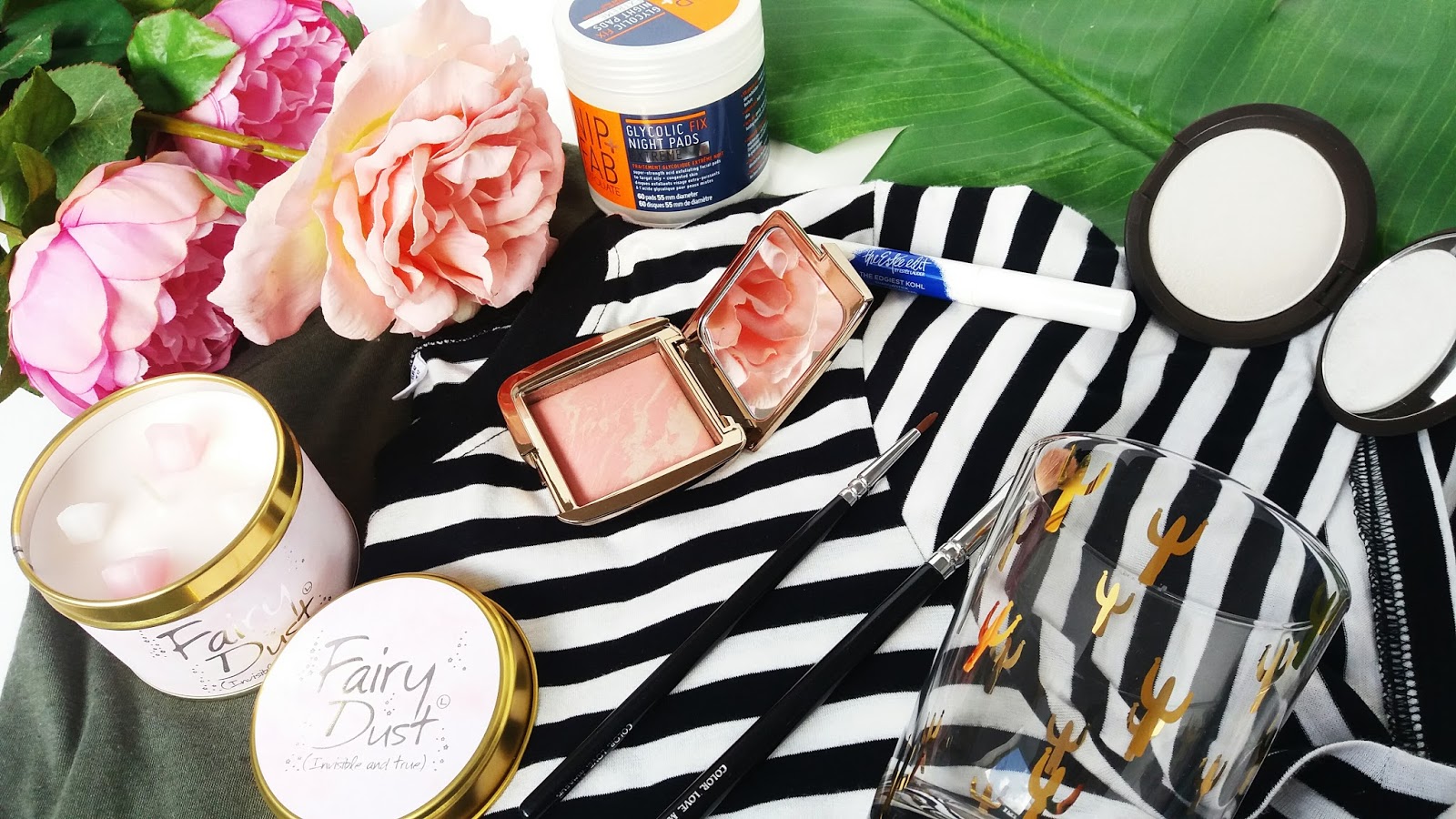 Have a gander at March’s Payday Purchases!