You may well have seen on Twitter/all over this blog that I’ve been in Japan lately. I’m going to be ramming the Japan content down your throats over the next few weeks (soz for violent imagery) but I thought I’d start off with something that garnered a bit of interest on Twitter. For my very last night in Japan, I stayed in one of their infamous capsule (also known as pod) hotels. If you’re not familiar with the concept, it’s basically a hotel where you sleep in a tube/box/coffin, depending on how morbid or claustrophobic you’re feeling when describing it. The picture below will explain a lot, but that’s the gist. 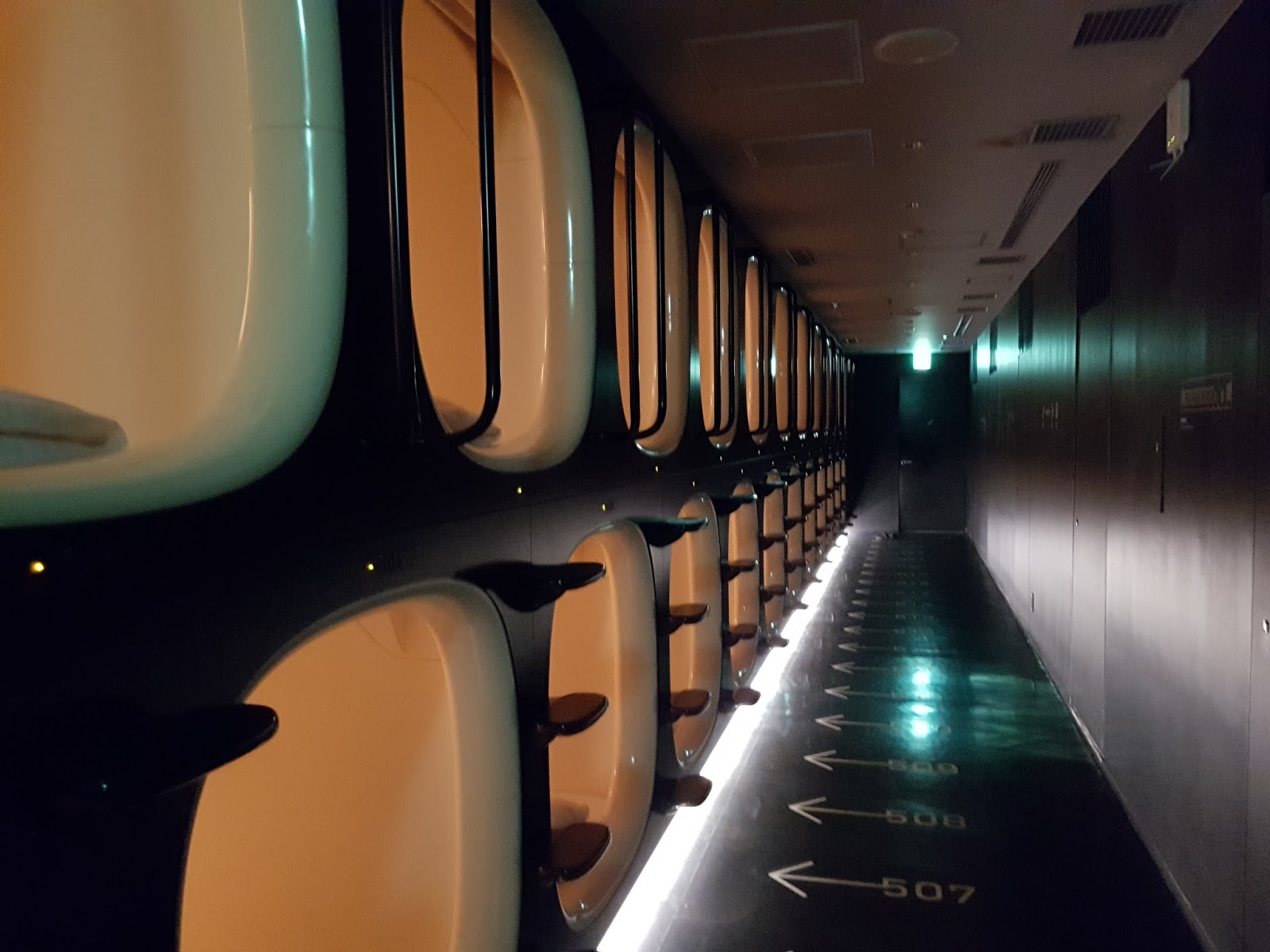 I stayed at Nine Hours, a chain of capsule hotels with branches in Sendai, Shinjuku, Narita, Kanda and Kyoto, where I was. You can stay for a night, for a few hours as a nap or even stop by for just a shower. The rates are pretty cheap, but then it is basically a dormitory. Upon check-in (shoes off as soon as you’re through the door), you’ll be given a key to a shoe locker in which you keep your outdoor shoes and the provided slippers when you’re not at the hotel. You’re also given a key card with a QR code, which unlocks a much larger locker in the shower and changing room area. For large suitcases that won’t fit in the locker, the 24-hour reception is happy to keep an eye on them.
Nine Hours is separated into male and female areas, with whole floors dedicated to each gender. The first thing I did after checking in was shuffle upstairs to check out my locker. Inside was a pair of complimentary pyjamas and a toothbrush, as well a few towels. I dumped my bag in the locker and then went to check out my pod. The sleeping room is large and dimly lit, with a hushed atmosphere like a library even when empty. I observed later in the night that the room is soundproof, as you can’t hear a thing from the toilets or corridor nearby. 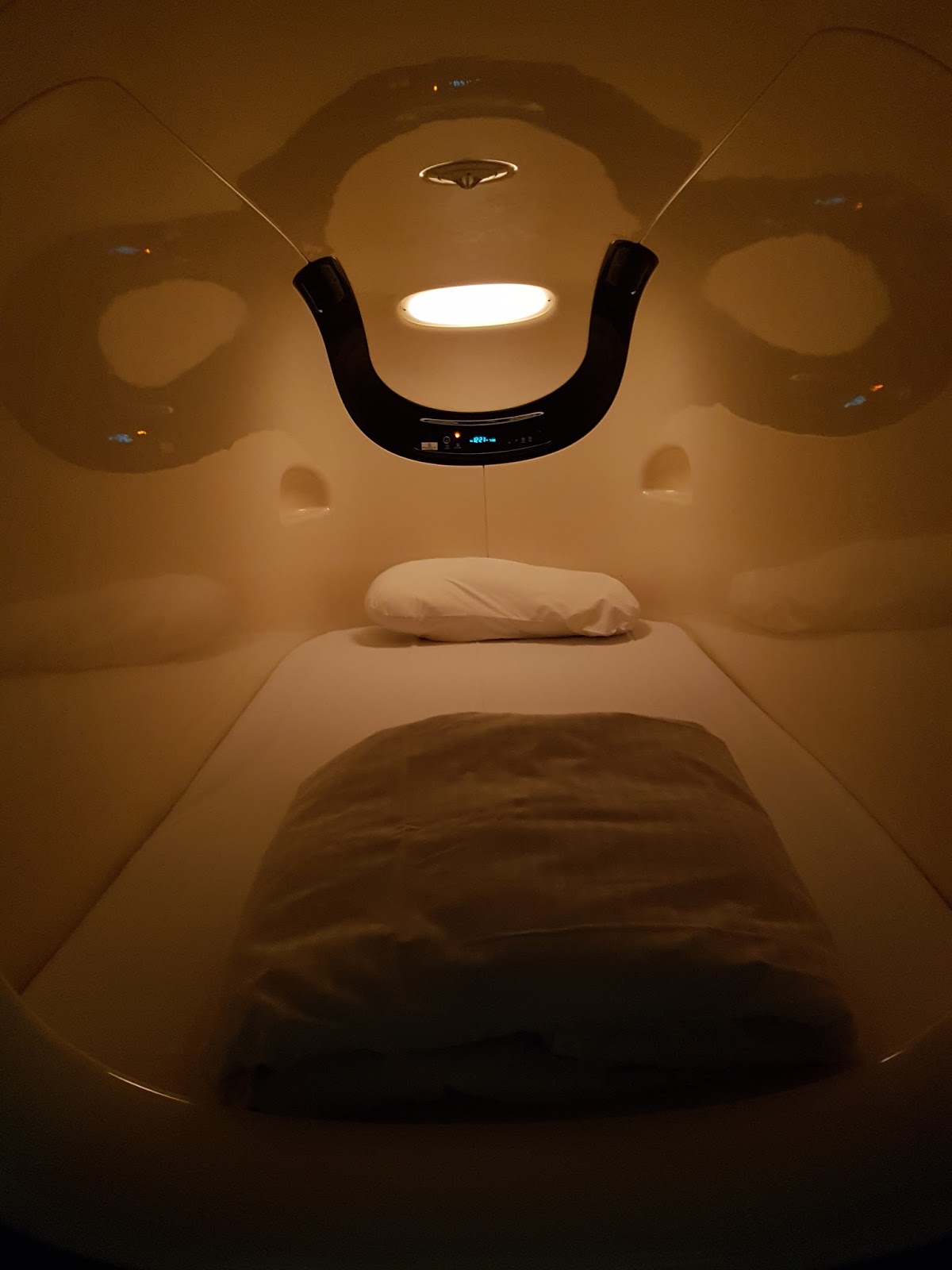 Some of the pods are on top of the others and require you to climb up a sort of ladder to get to them, but they’re still below head height and easily reachable for the able. FYI, this is definitely not a hotel for the less physically able, as even the lower pods like mine required you to be able to bend and crawl into them. The actual pods were surprisingly spacious; if you were feeling cuddly you could easily fit two people in one, although of course that isn’t allowed. There are two shallow shelves on either side of the pod; they’re not massive, but they were big enough for my glasses and few tissues for my cold. I took a bottle of water in with me for if I got thirsty in the night (technically this wasn’t allowed but shhh) and my phone and charger. There’s a digital display above the pillow which controls the in-pod lighting system and a clock; I think there’s a way to set the clock as an alarm but I couldn’t be bothered figuring it out as I had my phone anyway. There’s also a standard Japanese plug, which I used to charge my phone overnight.
I slept pretty well, but I’m not gonna lie to you, the pillow was like a block of cement. They were also selling the pillows at reception, so clearly some people love them. The pods are very dark when in sleep mode (there’s a button with a moon on it that you can press to dim the lights), but not pitch black. I think this is definitely a good thing, as I can imagine that waking in complete darkness ina glorified tube would be a bit disturbing; the dim light from provides some comfort. You also can’t legally lock a capsule for safety reasons, so you pull down a blind to cover the entrance to the pod before sleep. The pods themselves aren’t soundproofed, so you’re at the mercy of your fellow pod-mates regarding nighttime noises. A group of girls came in quite late and giggling, but they quieted down pretty quickly so I didn’t have to have words.

In the morning I headed down to the shower area and let me tell you, that shower was the highlight of my stay. I LOVE showers with decent water pressure, and this was amazing. I quickly dried my hair and got dressed before checking out. It’s worth noting that even if you’re staying consecutive nights you have to check out every day as you’re assigned a different pod each night. 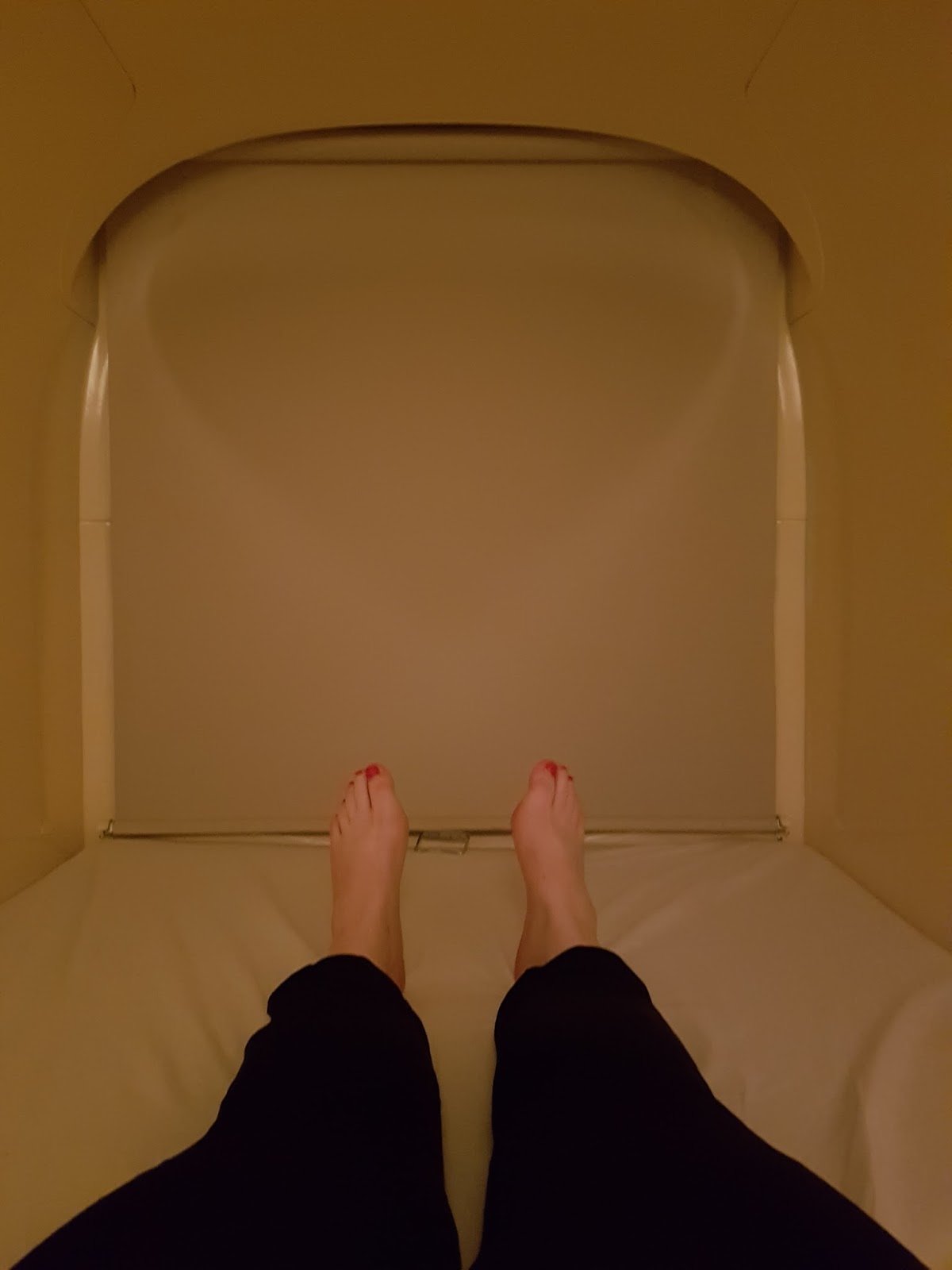 I would definitely stay at Nine Hours again and would recommend it to anyone who fancies trying out the whole pod hotel concept.