Since “my week in lipsticks” posts are relatively common in the beauty blogging world, and I do have one planned for later this month, but today I’m taking you through my week in shoes!  I’ve had a pretty busy week of running all over the place, but also some serious chilling at home for two days to recover.

I bought these boots in Copenhagen airport a few years ago, after spending five days there in an Air BNB because I was just craving a holiday.  I went by myself and had an awesome time, and then fell in love with these boots in the airport.  I had several hours before my flight, and spent about forty minutes staring mournfully at them and chatting to the sales assistant.  I didn’t have enough Danish Krone to buy them outright, and assumed that the rules about splitting payments were the same in Denmark as the UK.  But after mentioning this to the lovely lady in the shop, it turned out I was wrong!  It was perfectly okay to split the payment part cash part card, so I gleefully poured out all my change and notes and whacked the rest on my card.  It’s a good job it was a quiet Thursday as we spent ages counting all the tiny coins to make sure of the amount, which I felt pretty bad about.  The lady even gave me 10% off, because she was clearly just some kind of boot angel. 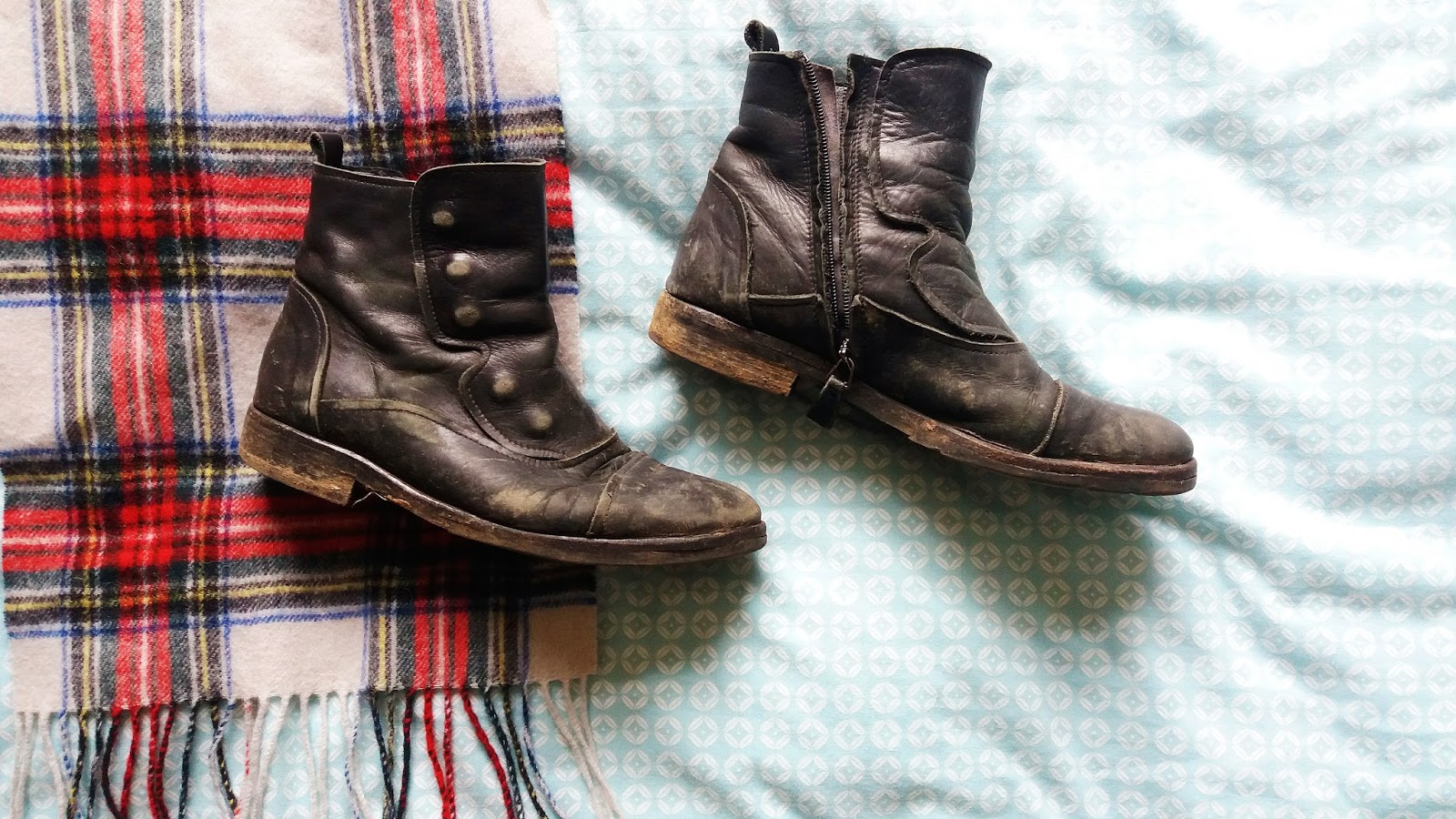 They’re by Hangar, an Italian brand and they’re the comfiest boots ever.  I’ve not taken very good care of them if I’m honest, but I recently bought some leather treatments so they’ll be getting a little TLC very soon.  I loved them immediately because of the little roundels within the leather, as they reminded me a little of those Victorian style ladies boots.

I have serious issues with most ballet pumps.  I find that they cut me open at the ankle, no matter how I much I try and wear them in.  “Cut me open” isn’t even exaggerating; I end up with deep cuts and rivers of blood, sorry for the graphic description.  These are one of the very few pairs I’ve ever found that don’t do that. 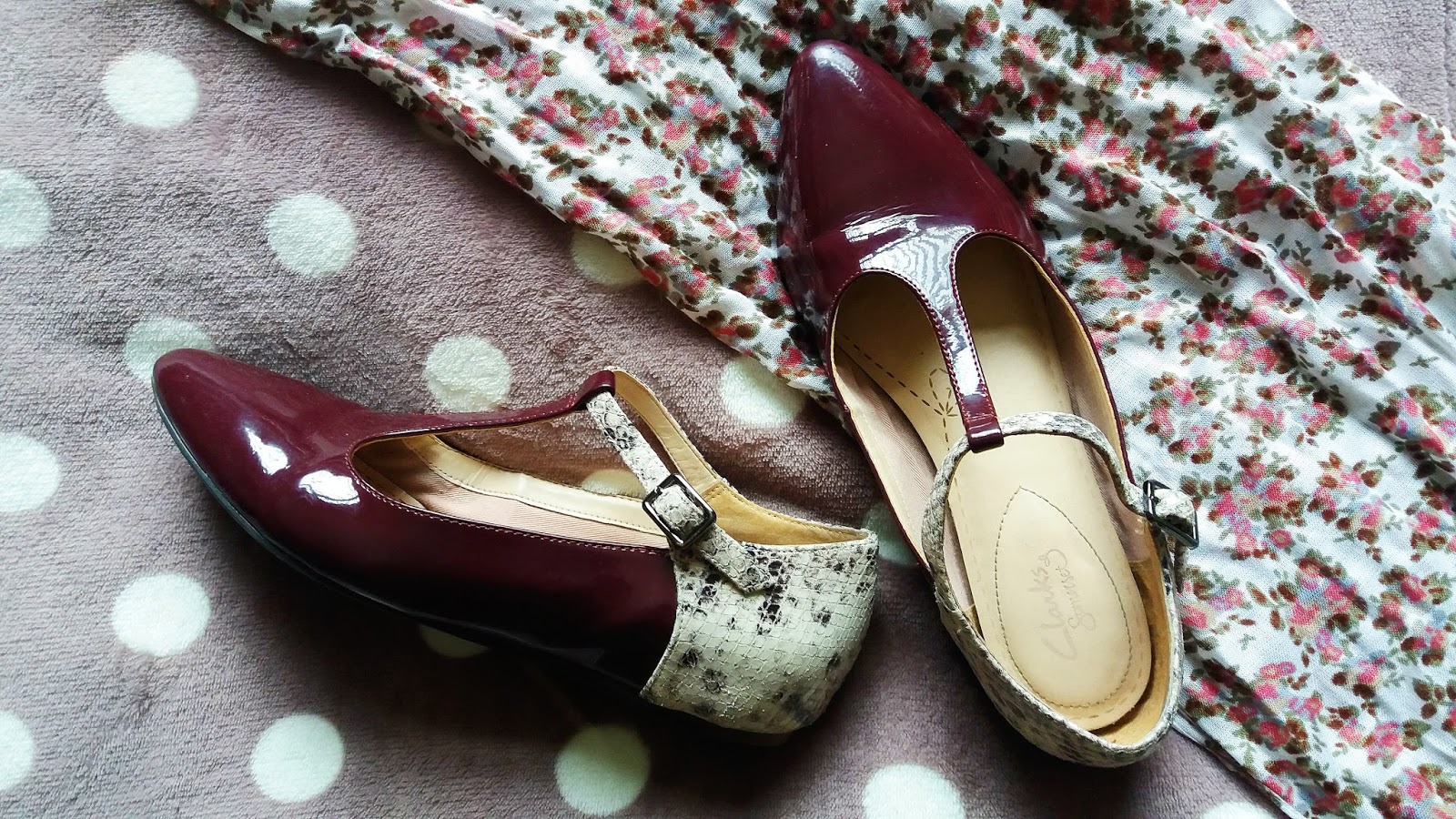 They’re Clarks’ Coral Garden shoes, in patent burgundy and faux snakeskin from last Autumn.  I also have them in plain black, which are still available.  The reason they don’t wreck my feet is the hidden wedge inside the shoe, that just raises my foot enough that the back of them doesn’t cut into me.  I love the T-bar, and burgundy is a big colour for me that goes with almost everything I own.  The little snakeskin detailing just jazzes them up a bit as well, in my opinion.

I bought these boots from Urban Outfitters about four years ago, and they’ve lasted really well.  They’re a lovely softleather and seem to fit my feetpretty much perfectly.  I love the metallic loopy things that you use to lace them up, though it does make them a pain if you need to take them off in a hurry. 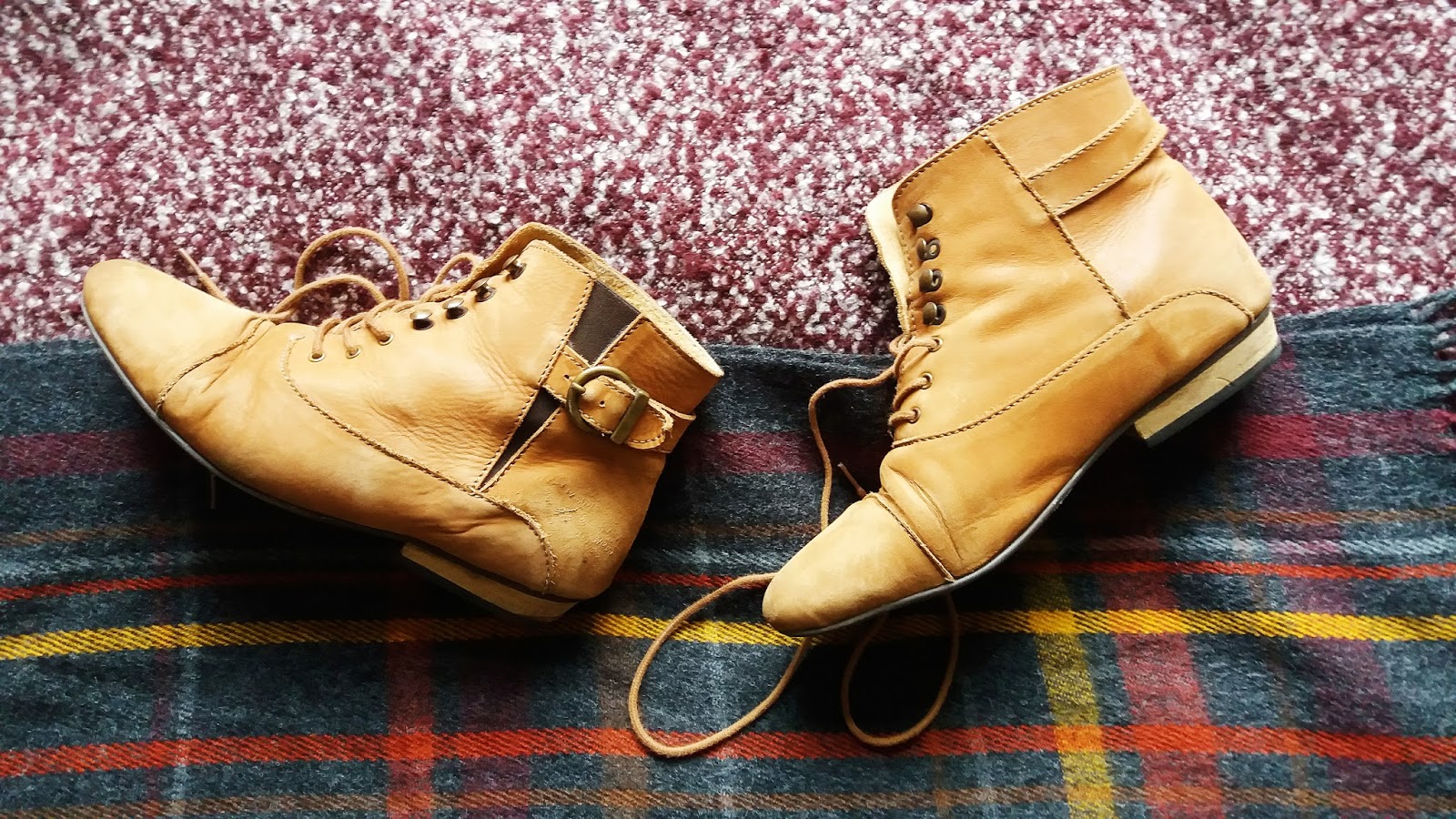 They’re by the brand Bertie, which mostly seem to make men’s shoes now, but I love these so much that I really thing they should go back to doing women’s as well.  I wear these a lot with my skinny khaki jeans from Topshop.

These Skechers GoWalk trainers are my general running trainers, and also something I just shove on if I’m just popping to the shops.  They’re dove grey with aqua detailing, and they do the trick just fine. 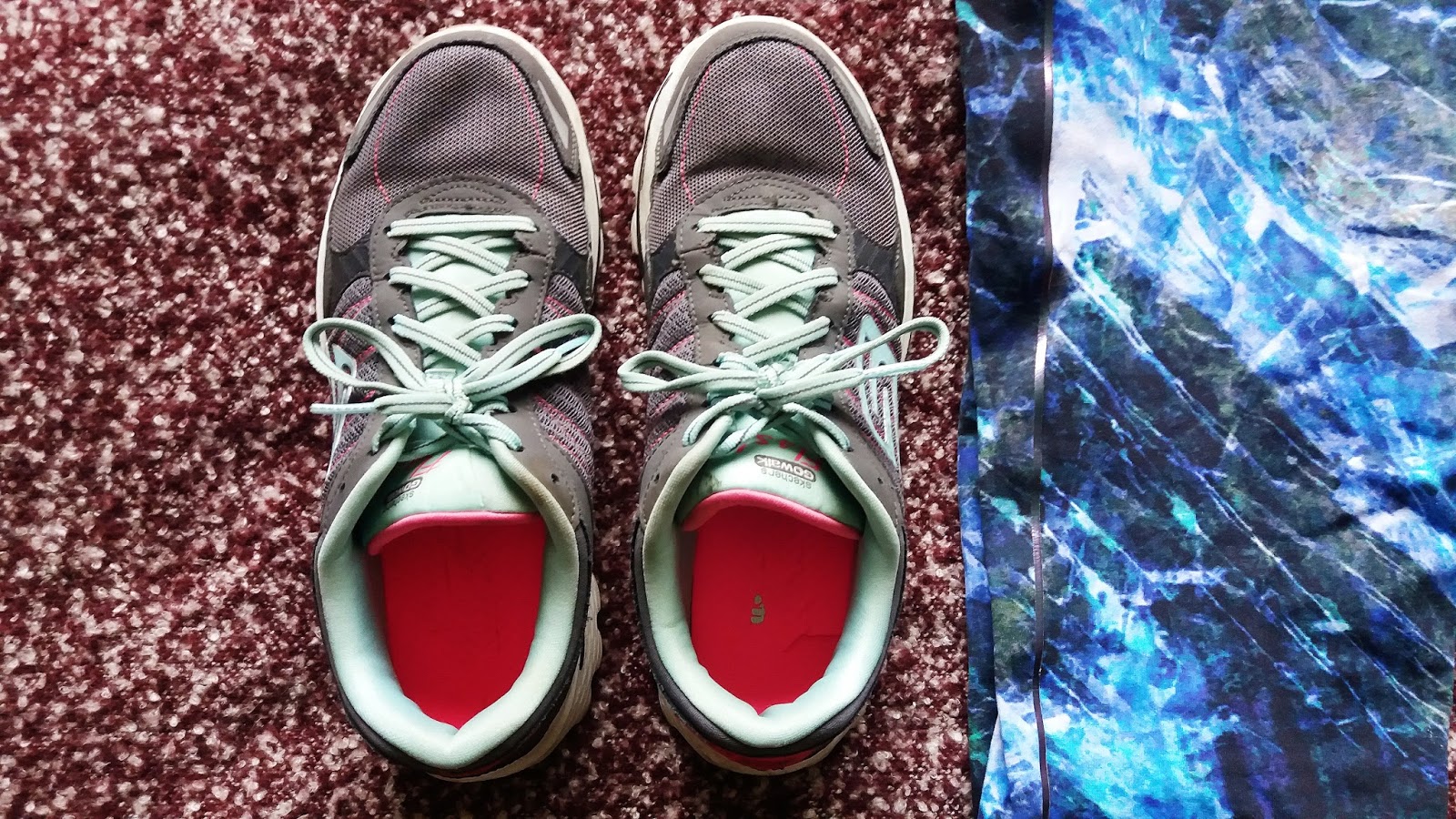 I can’t find them on the website anywhere, or even anything the same as them, so I expect they’ve been replaced with a new model with a different name.  All the current GoWalk shoes are proper shoes rather than trainers.  Sneaky peek of my favourite workout leggings here as well!

I love these navy blue heeled boots from Office, but damn they are not comfy.  The heel is just a block of wood, so they have no give at all to support the feet while walking.  They make my feet ache more than a pair of stilleto heels I own, but I still wear them because they’re beautiful. 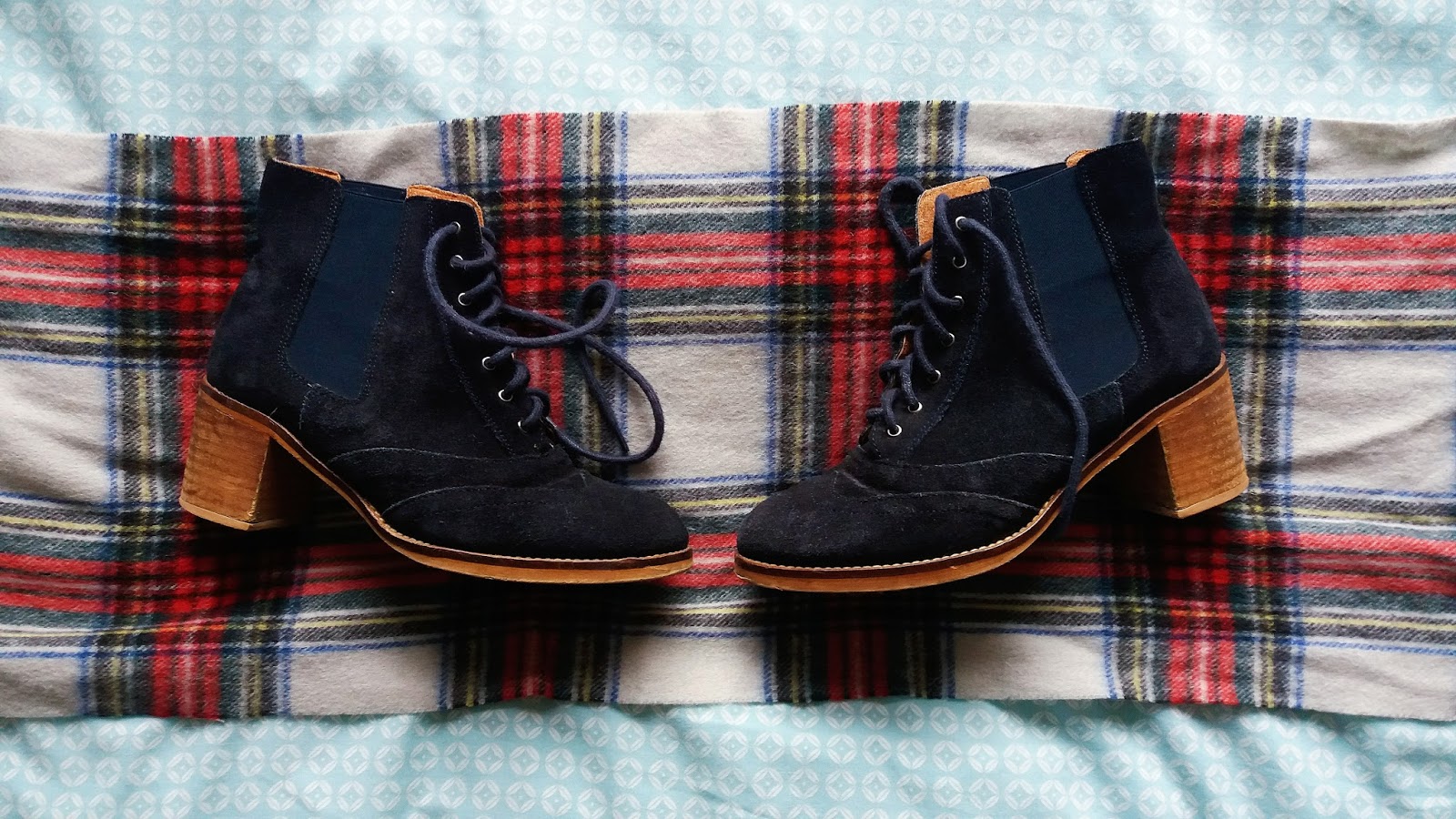 I quite often wear them with either skinny jeans, or with a gorgeous knee length pleated skirt in a coppery colour, with either bare legs or skin coloured tights.  They come up slightly higher than my other ankle boots, which means I have to be careful not to end up looking like I have chunky short legs (I do have short chunky legs, I just don’t emphasise that fact).  Suede and with a heel, they’re definitely not practical up North, so I wear them mostly if I’m only out for an hour or two, rather than all day.

These are my manky old slippers that I refuse to get rid of or replace.  They’re big snuggly boots, and they pretty much never leave my feet when I’m in the house from October onwards.  I was very happy to dig them out again. 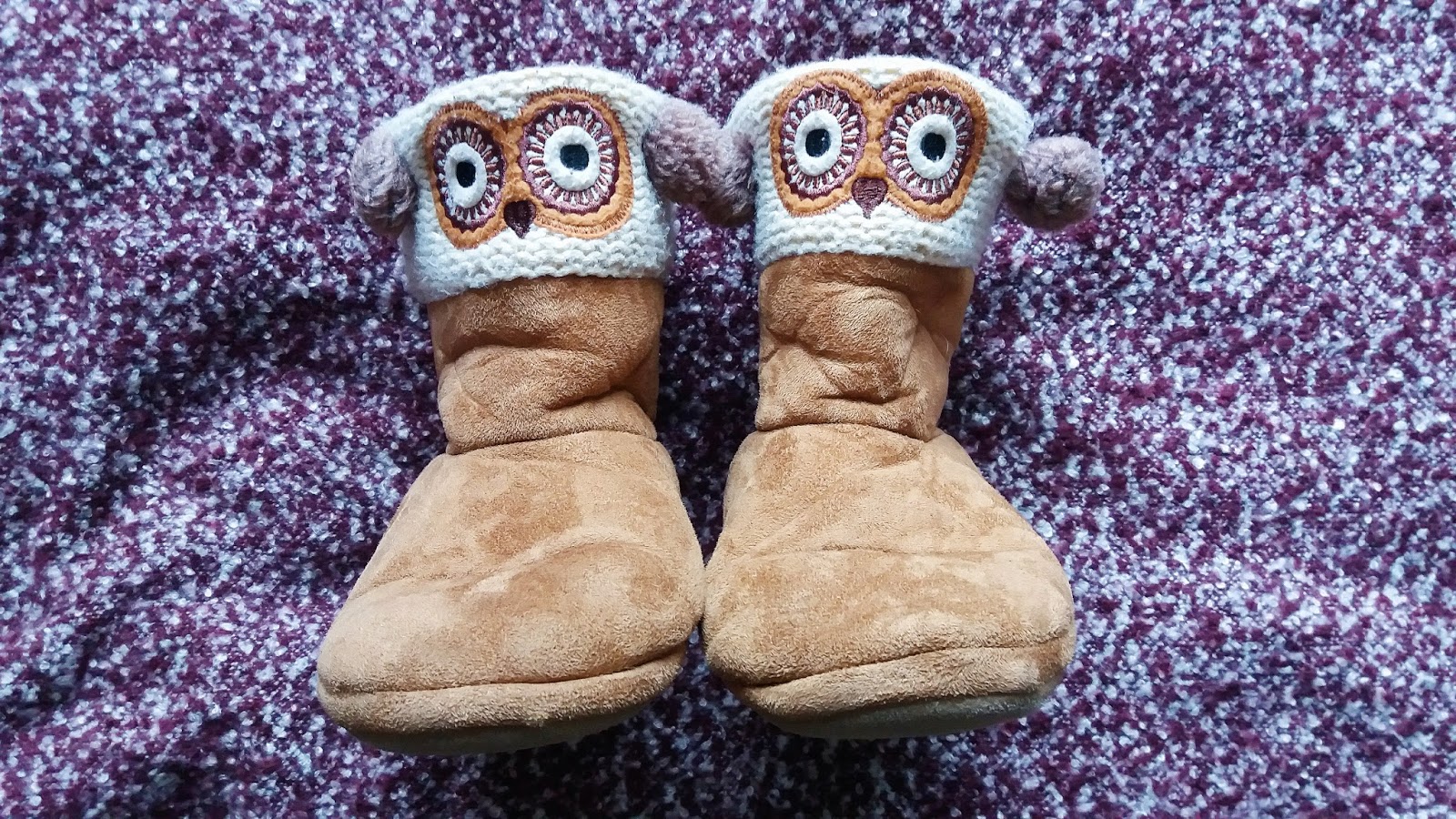 I have long maintained that those aren’t just owls on them, but owl-bears.  No owl has pompom type ears, so I have concluded that they are a terrifying owl-bear hybrid creature.  Let’s be real though, how freaking scary woul that be?  Owls are creepy enough when they’re angry, imagine one the size of a bear and with claws. I would nope right out of there if I met one in the woods.