The theme of March’s box was #NoFilter, which seemed an interesting concept for a beauty box. I’m not convinced the theme really carried through in this edition, but you’ll have to make your own mind up! 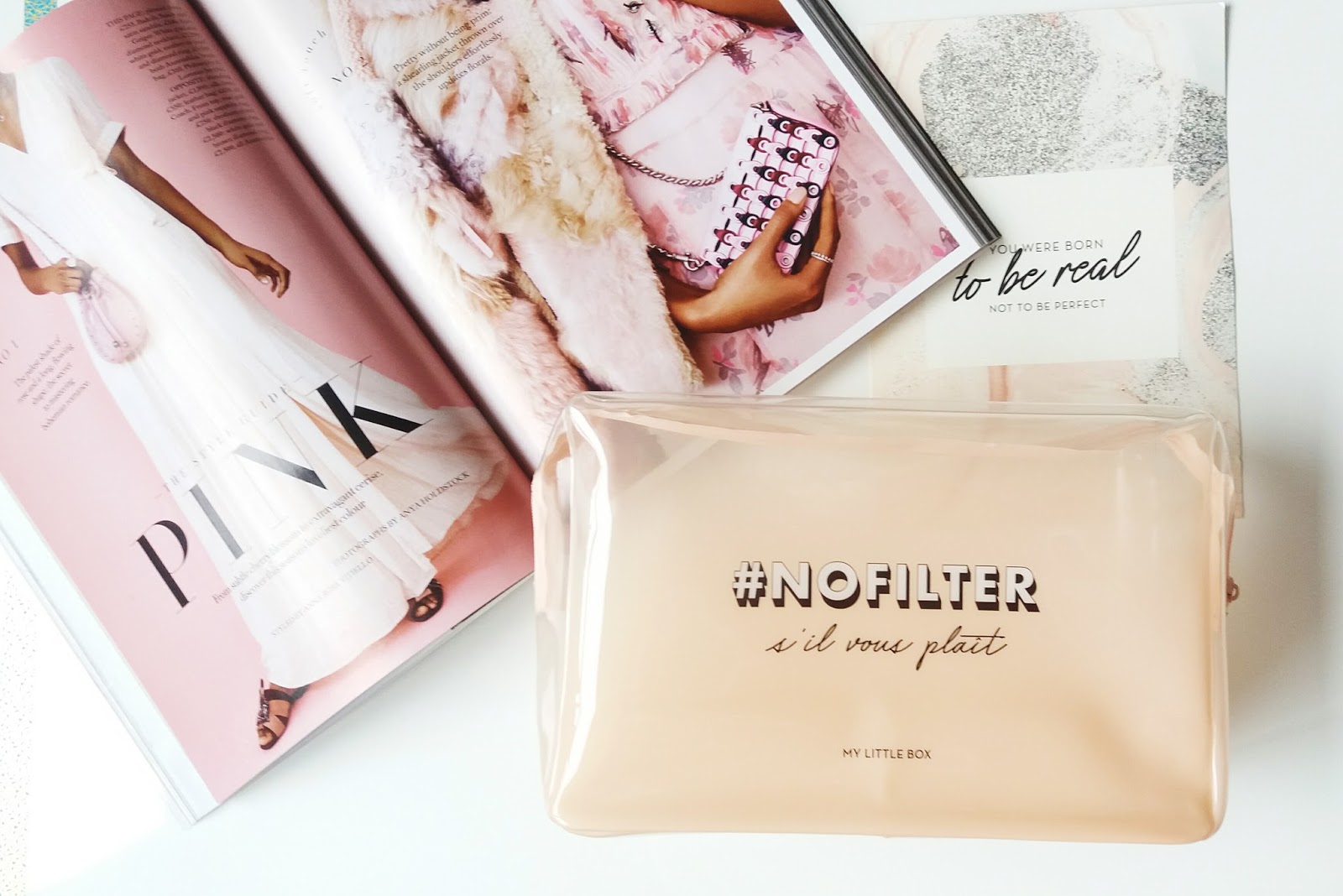 This month’s MLB came in this rather swish makeup bag, rather than the usual box. The bag is a decent size and is now sat on my window sill full of skincare, replacing the far bulkier box I was using before. It’s a really good size for a week away, but would be too big for just a weekend’s worth of supplies. 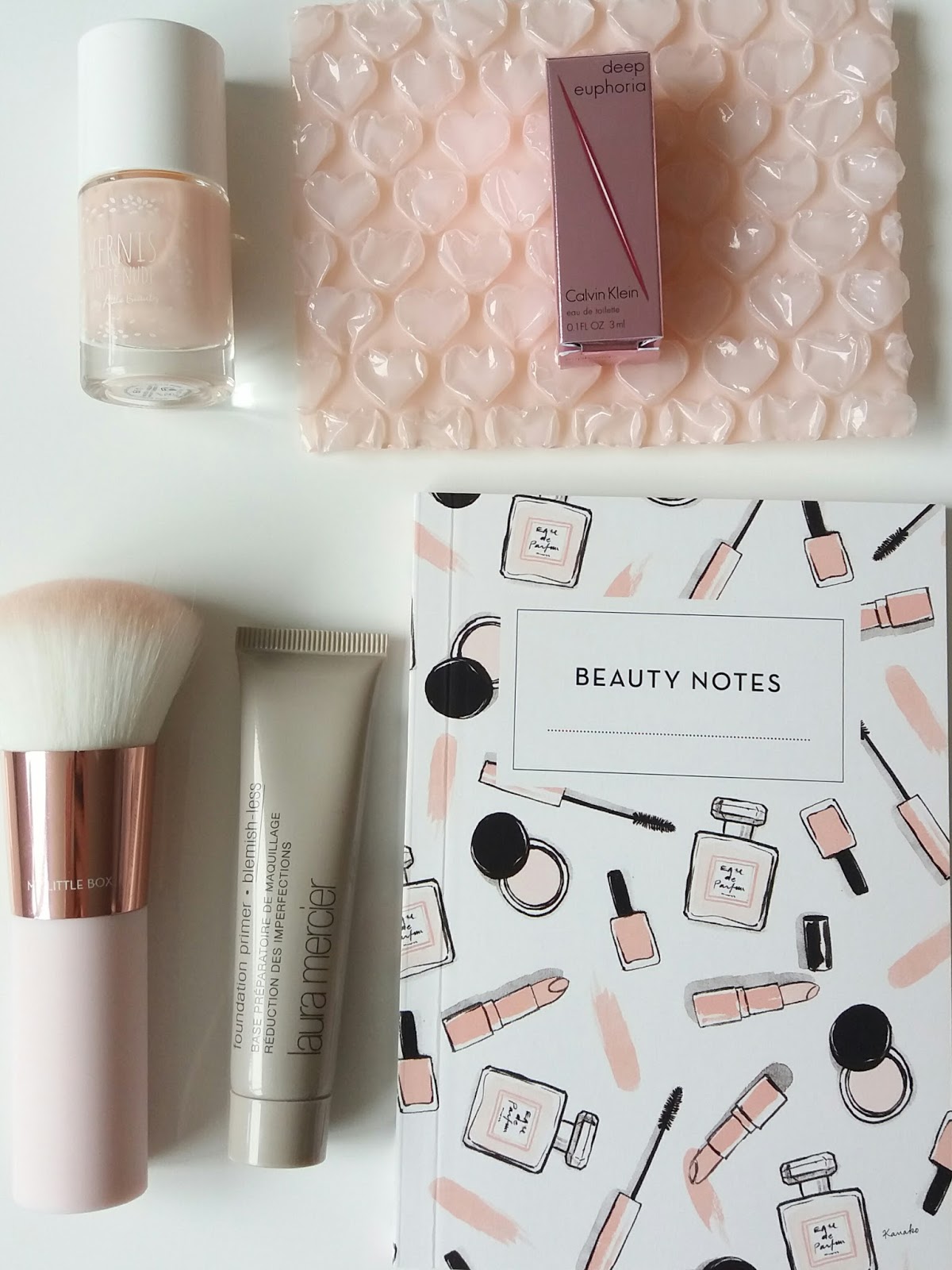 In the bag was a cute travel size of the Laura Mercier Blemish-Less Primer, which I was pretty excited about. My old enemy acne has recently returned and is wreaking havoc on my neck and jaw. I’m hoping that a combination of acne-focused products and eating a little better will bring it back under control, because it takes so long to gain access to a dermatologist these days. I’ve been using this as a primer in the affected area, and it sits nicely enough under foundation, although isn’t as pore-filling as I would like for my face, so I’ve been going in with my usual primer where needed as a bit of polyfilla. 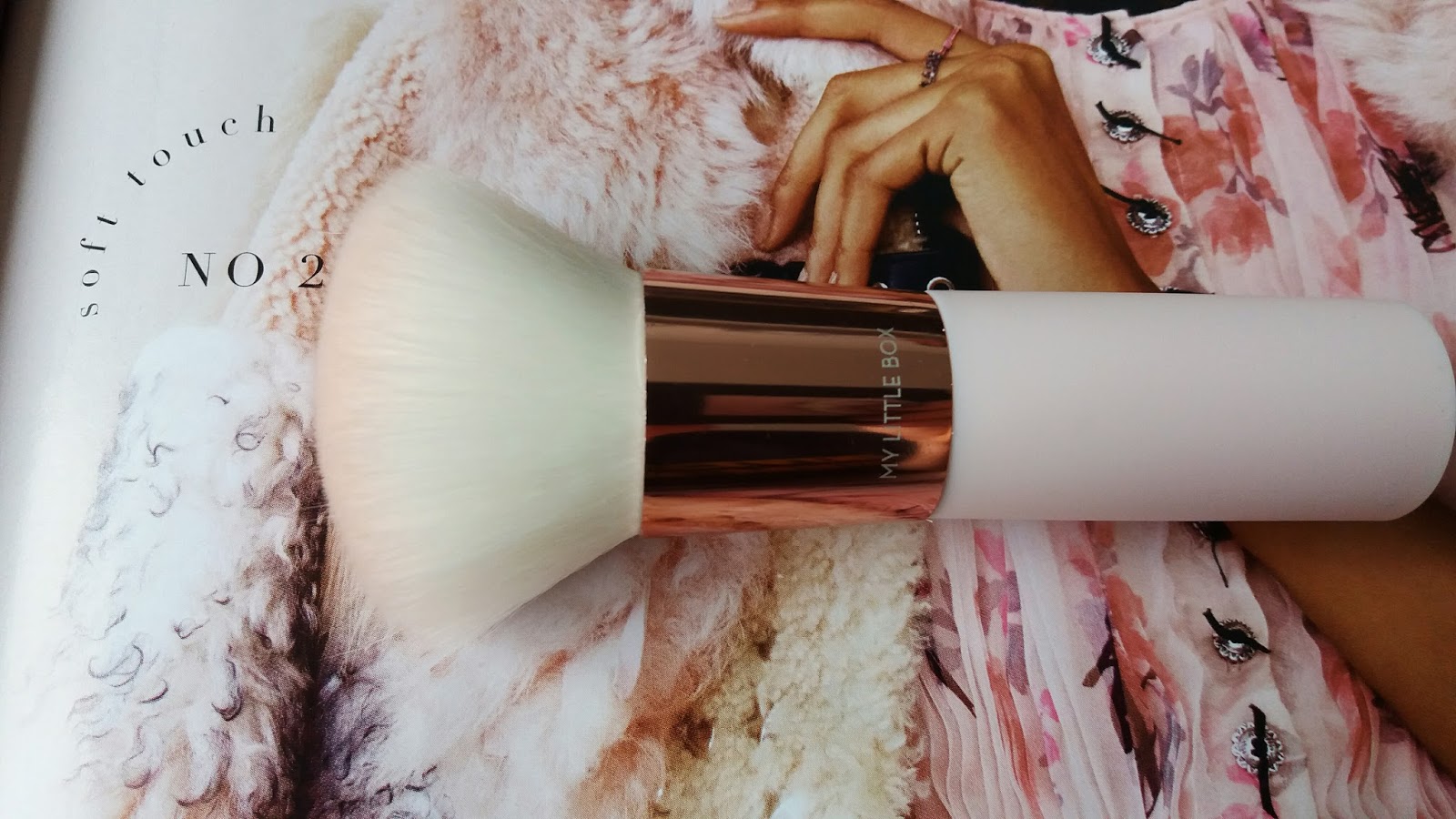 The “Selfie” brush is a lovely, extremely soft, synthetic powder brush. Despite the cringe-inducing name this is actually a really nice brush, distributing loose powder evenly and looking very pretty in photos as well, which is always a bonus. I’ve always got an eye out for cute blog props that are actually useful.

I’ve never really been sold on the whole nude nail varnish trend, and never would have bought this colour myself. It’s not that much paler than my skin and as is often the case with paler shades, it took several coats to achieve opacity. I’m still not convinced on the colour, but the formula is quite nice, so I may use this as a base coat in the future. 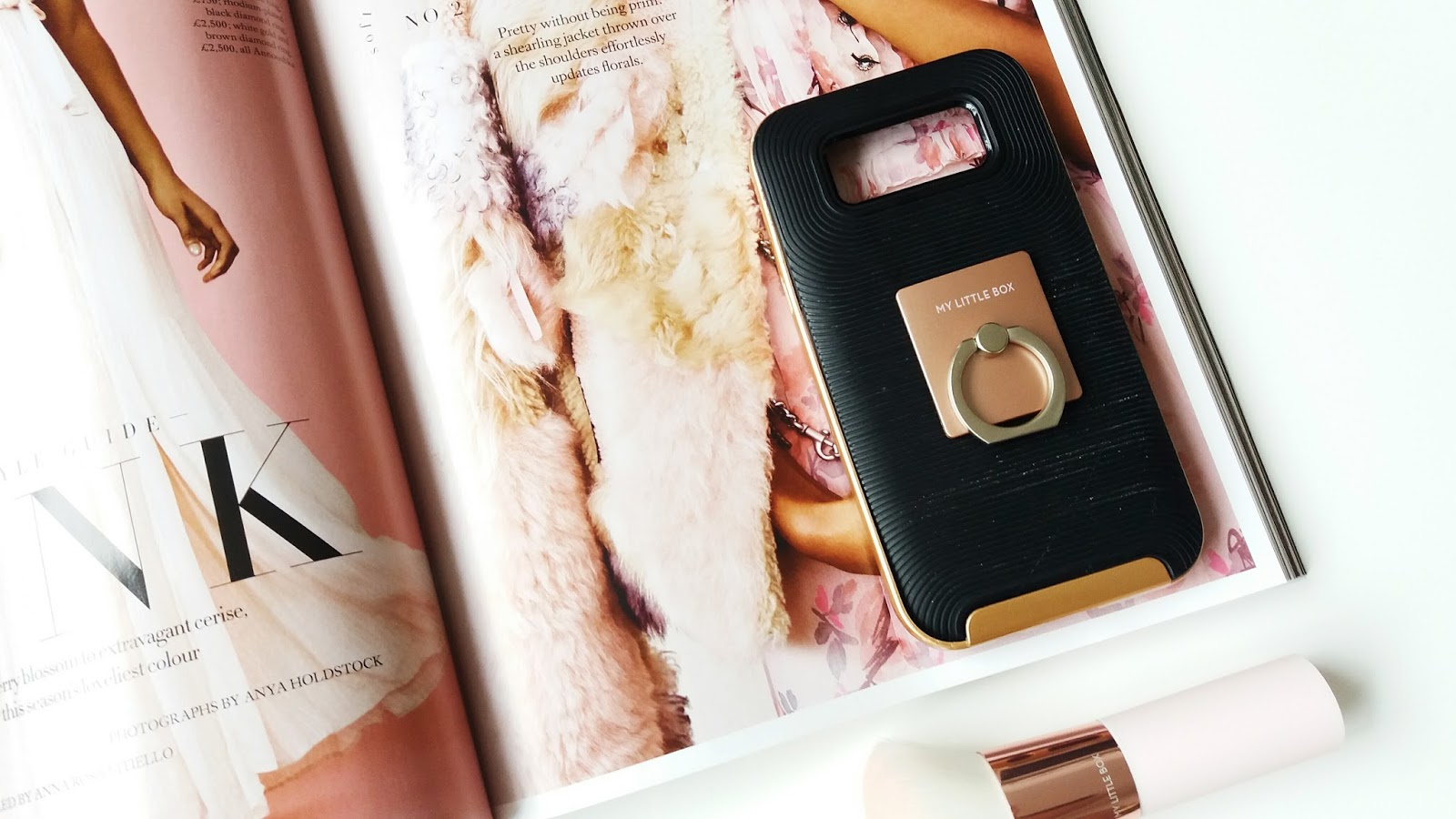 This was an odd choice to include in a beauty box, but damn, I love it. This phone ring is much the same as the Apple i-Ring but y’know, not $20. It sticks to the back of your phone or phone case, and is basically just a ring that you can rotate any way you like. I’ve used it constantly since I got it. I use it as a tiny tripod when I’m watching youtube videos while doing my makeup, and I haven’t dropped my phone once! It does mean that my phone is basically glued to my hand now, but since I’ve been trying to up my Instagram game lately that was already the case. Also can we talk about the adorable heart shaped bubble wrap it came in? Because that stuff is gorgeous and I didn’t even have the heart to pop it!

Finally, there were two things that were pretty poor. The Calvin Klein Deep Euphoria sample was pants and smelled fairly horrible and chemical to my unrefined nasal palate (I’ve decided that’s a thing), and of course, another My Little Box, another kinda rubbish little notebook that went in the bin. 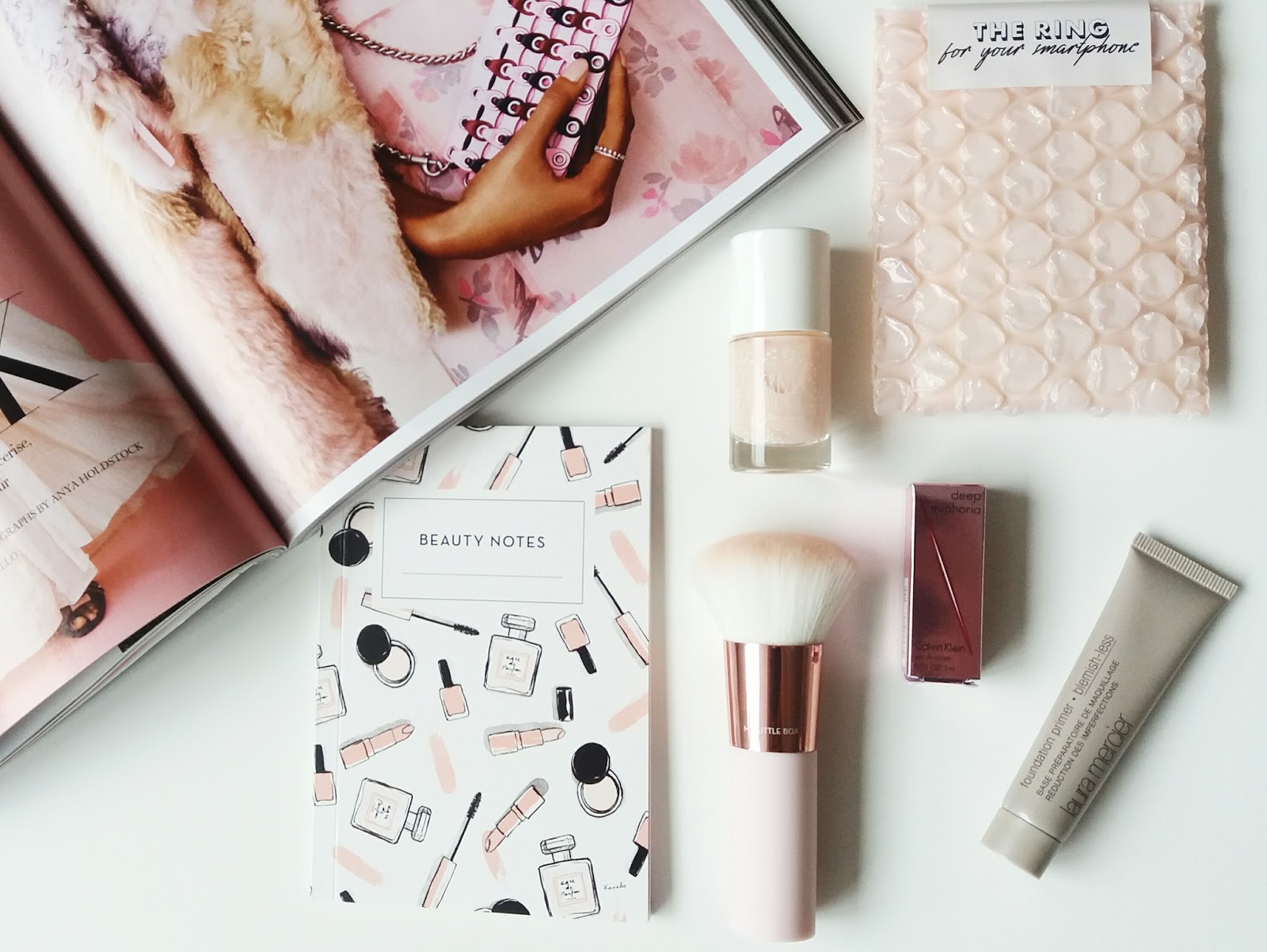 It was a bit of a mixed bunch this month. I LOVE the phone ring and the bag itself, and the Laura Mercier primer was a fab thing to find in a box. I do find that MLB is the most up and down of the boxes I’ve tried, and it feels like  they get a few really great items and then try to pad out the contents without any real thought or consideration as to what would actually be good to include.

Let me know if you disagree!