It’s been a funny old month for my makeup bag. I’ve had some pretty annoying skin problems which basically derailed a lot of my usual makeup choices and forced me to get a little inventive. I’ve been wearing less makeup than usual in order to focus on skin care and helping it heal. 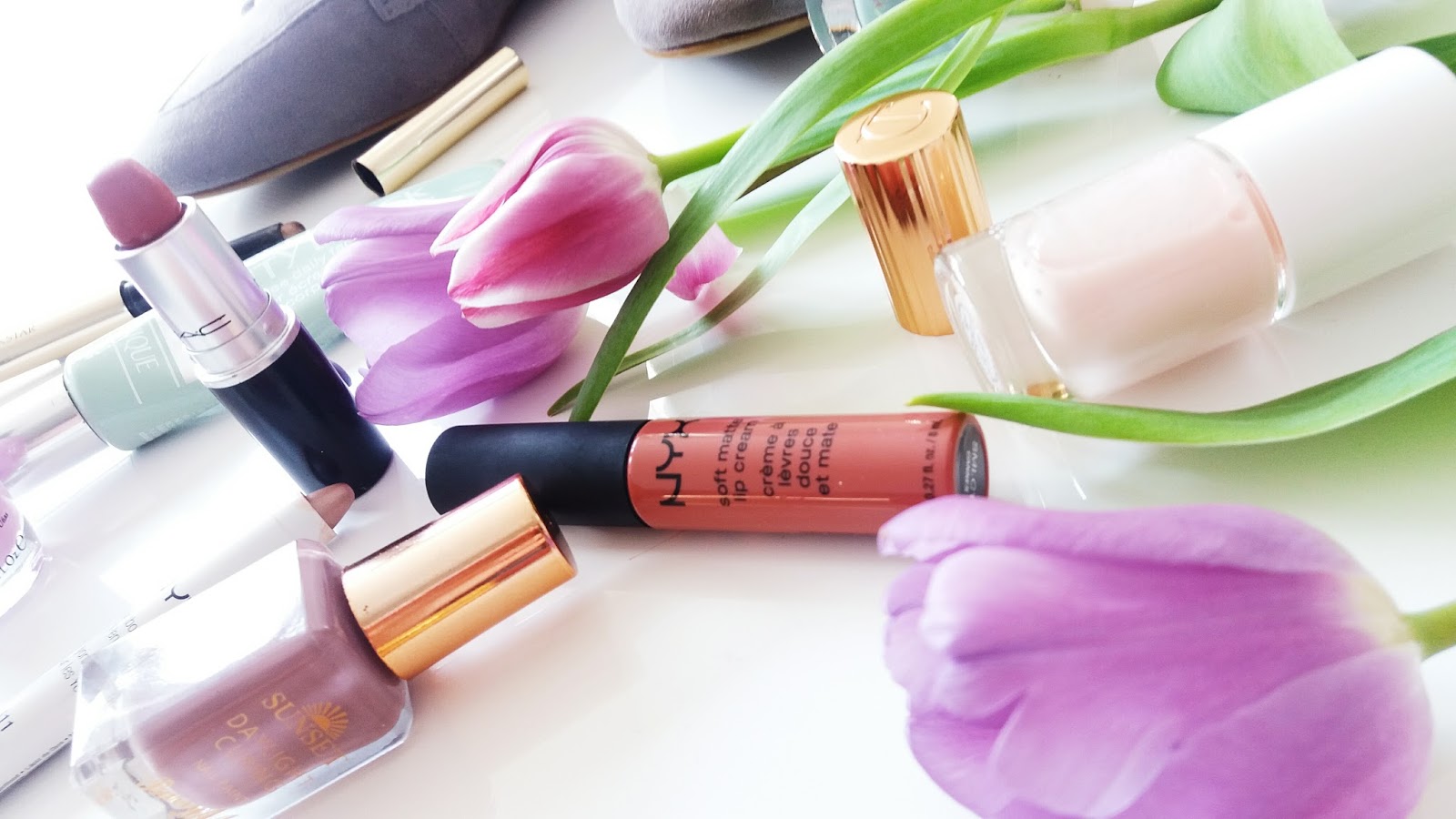 I realise I’m being kind of vague about these “skin problems”, but there’s really no reason for that (look away now if mild skin conditions gross you out).I’ve had two separate allergic reactions; one to a primer from Clarins (which I was assured in–store was suitable as an eyeshadow primer) and another to a necklace.  I ended up with a horrible contact dermatitis rash on my neck and decolletage, and on my eyelids. MY EYELIDS. Do you know how hard it is to do your makeup when your eyelids are weirdly orange and kind of flaky? The answer is very. 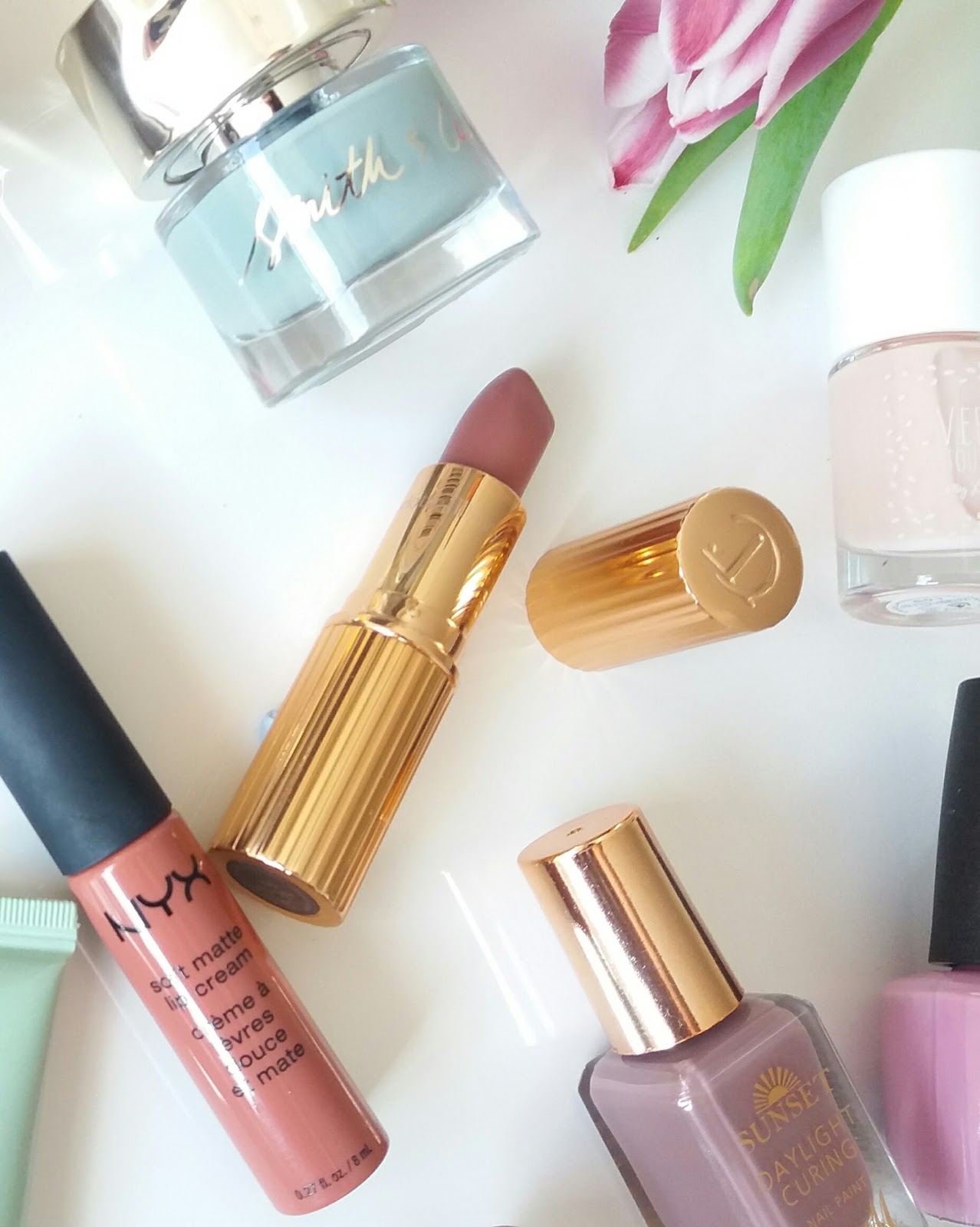 I actually reacted to the necklace way back in February and was prescribed a steroid cream and some anti-histamines. It was annoyingly itchy and left me with those dry, discoloured patches you get on my neck and chest. I figured cheap metal was officially out for me, but as the first ever allergic reaction I’d had, I thought it wasn‘t so bad. March rolls around, and while the rash from the necklace is loads better, it just isn’t going away entirely, and then my right eyelid starts going the same way. I couldn’t for the life of me figure out why – it’s not as if I’d been rubbing cheap costume jewellery on my face. I was still using the steroid cream, so I was applying it extremely carefully to my eyelids at night and plastering the stuff on my neck as well. Naturally, this brought back my acne on my neck in a big way, for the first time since I had Roaccutane years ago. 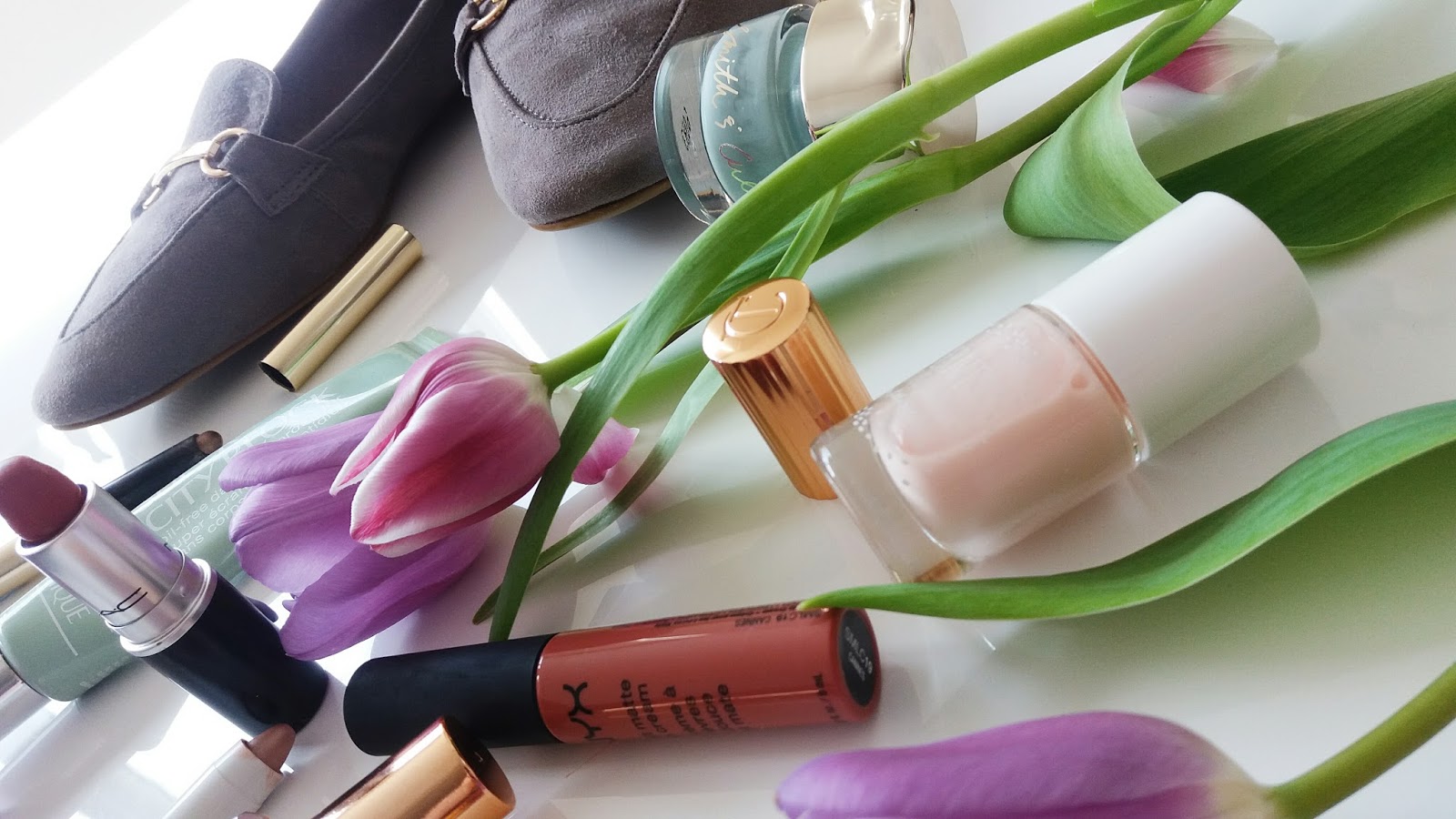 The doctor’s answer was antibiotics, a topical acne treatment and more steroid ointment. She told me that the steroid ointment was aggravating my spots (which I‘d already guessed) and to just not apply it to them. When I pointed out that the contact dermatitis and acne were in the same place, so how could I avoid them? She just kind of shrugged and kicked me out. I’m not a fan of that doctor. 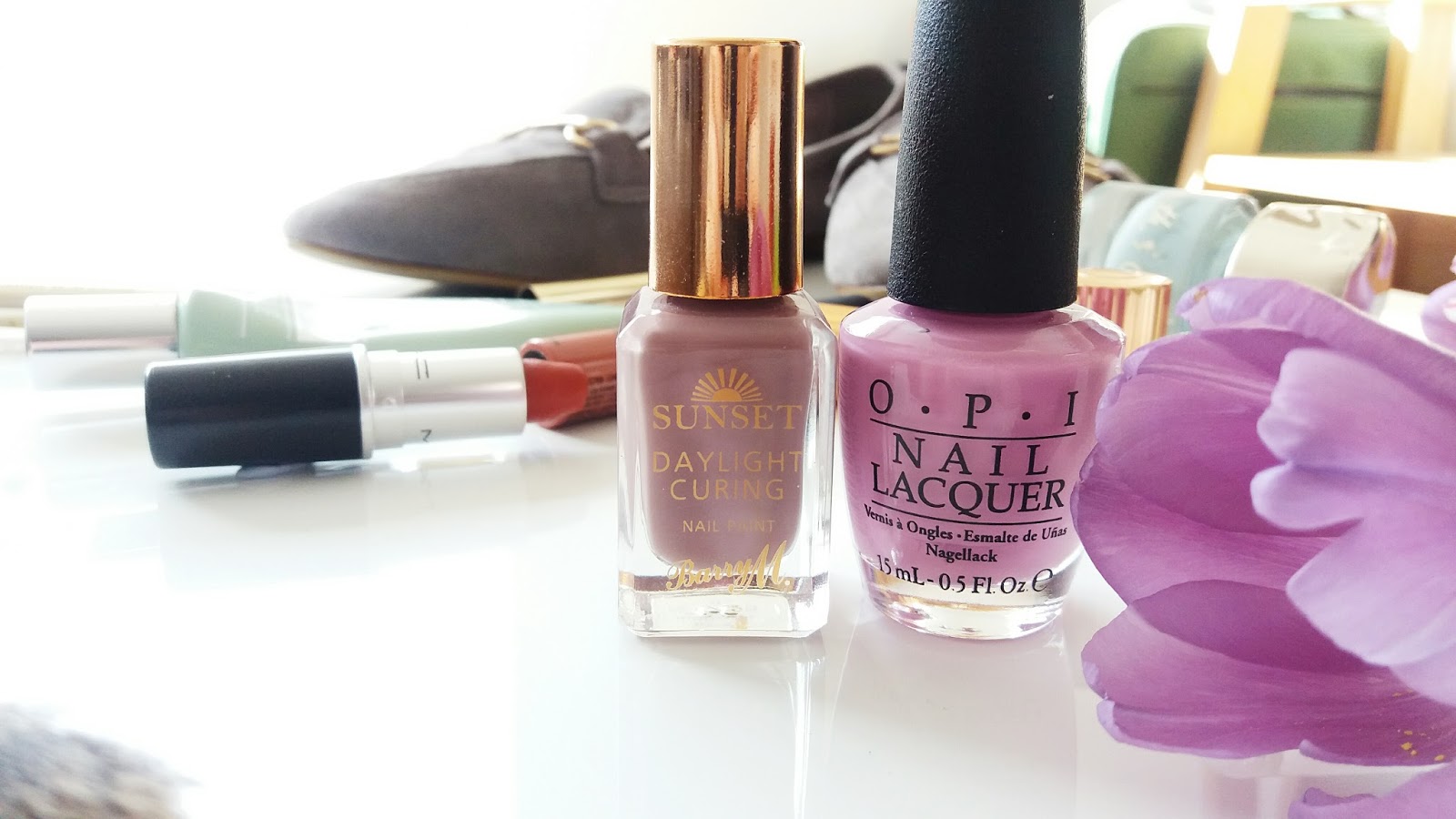 I’ve taken matters into my own hands. I‘ve been using the steroid ointment on my eyelid very sparingly, and they‘re pretty much back to normal. I’m also taking the antibiotics, but I’m not convinced they’ll do anything. Nothing but Roaccutane worked for my acne previously, so I very much doubt anything will now. I can’t stand the topical acne stuff as it wrecks my skin and I’m fairly sure is making my dermatitis worse, while the steroid ointment will aggravate my acne. Instead, I’ve been applying liberal amounts of the Kiehl’s Midnight Recovery Solution that I bought a while ago, and things don’t seem to be getting worse, at any rate. I’m not sure where to go from here. I’m going to attempt to return to using the steroid ointment on my neck and try and go around the spots as they’ve begun to clear up a bit, so I’m hoping I can dodge them. But yeah, it’s been a rough month for my skin. 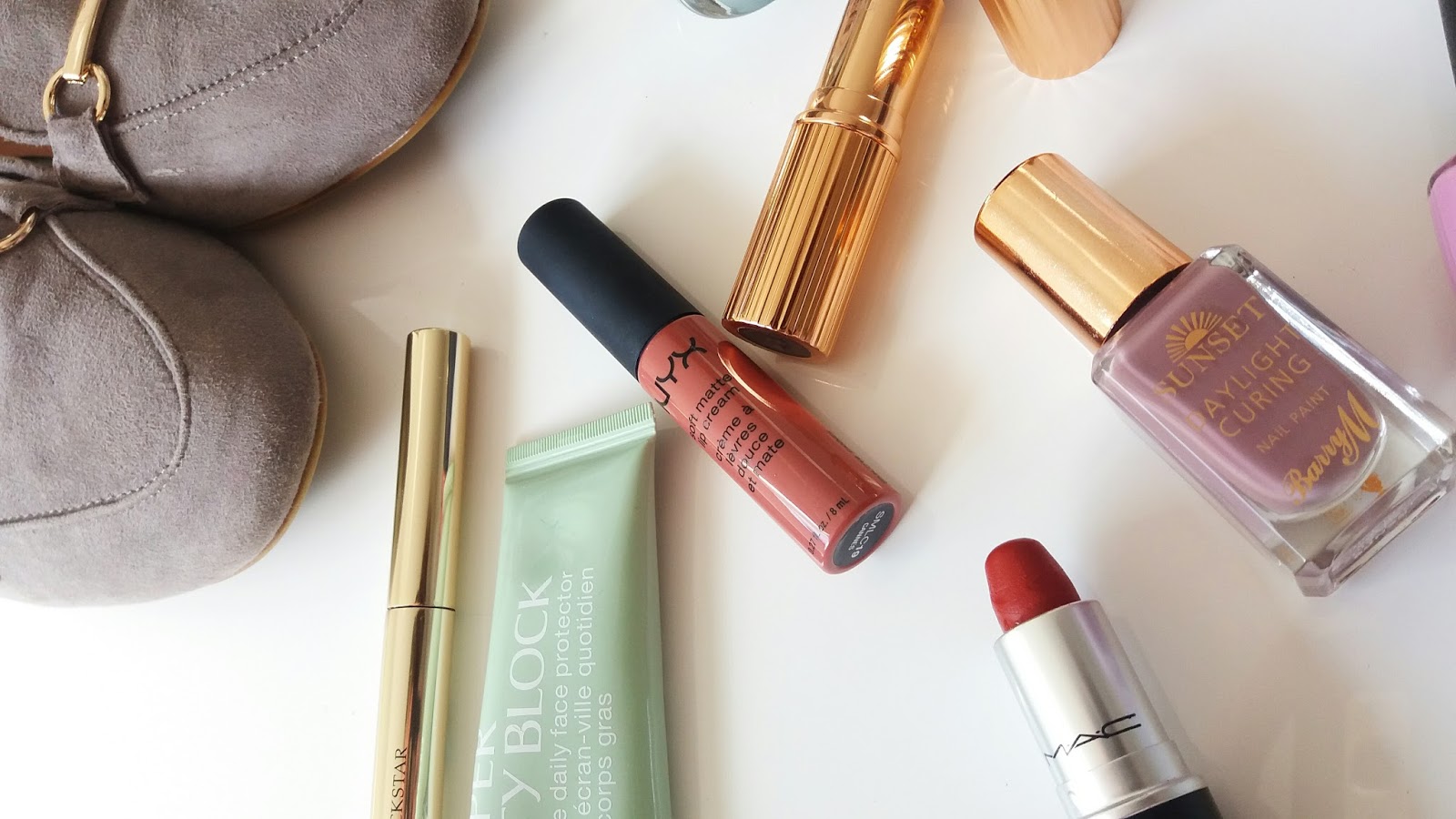 In answer to my skin’s cry for help, I’ve been pretty minimal with this month’s makeup. I’ve been going for a cream eyeshadow because powder on dry, flaky skin is not a good look. The two I’ve been using most are the NYX Jumbo Eye Pencil in Yogurt (they spell it like that, not me) and the By Terry Ombre Blackstar in Bronze Moon. Bronze Moon is, predictably, a metallic bronze shade, while Yogurt is a pink-taupe. I’ve just been smudging these upwards from the lash line over the lid, along with copious amounts of mascara. 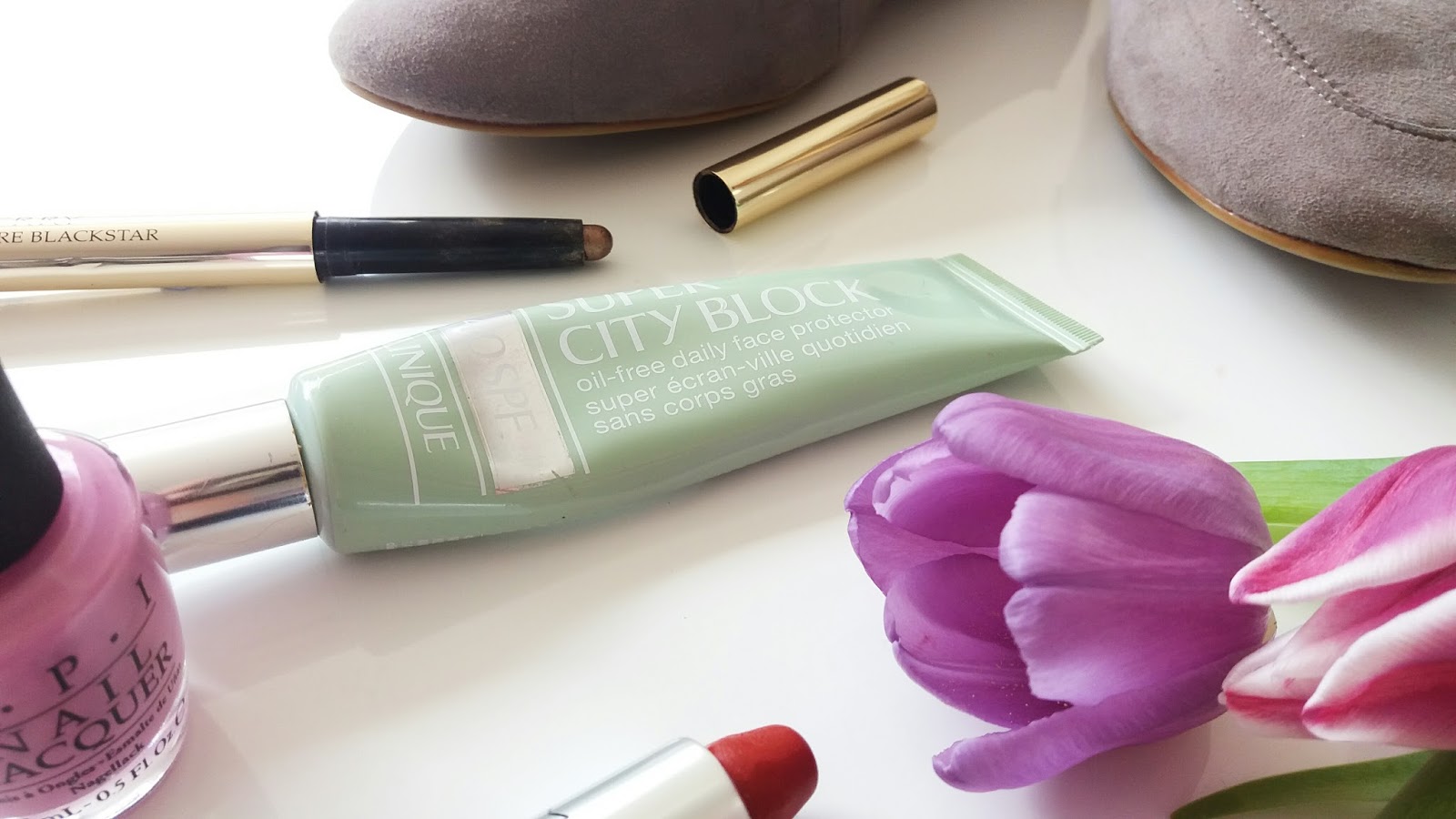 For foundation, I’ve been all about the BareMinerals Foundation I bought with last month’s pay cheque, as I figured my skin could probably do with something a bit lighter at the moment. What with the unseasonally warm weather we’ve had in Manchester this month, I’ve also been using my faithful Clinique SPF40 Super City Block. I stocked up last summer, which is just as well as it‘s been reformulated. When I run out I’ll definitely try the new formula, as it’s supposed to be translucent, which is fab because currently it’s rather too dark for me and I have to blend the crap out of it and just accept that my face probably doesn’t match my neck. I’ve linked the new version above as you can’t buy the old one anymore. 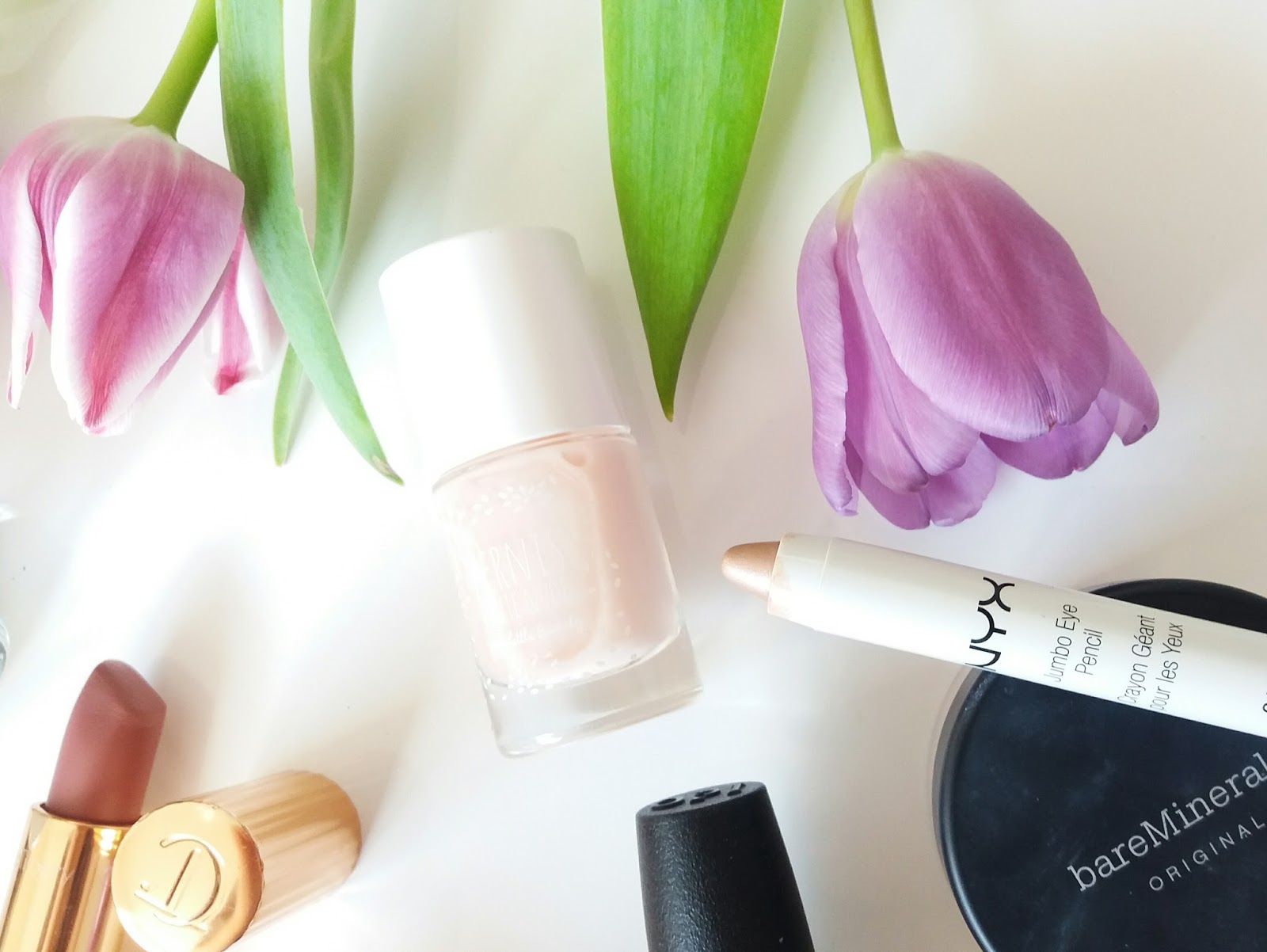 I’ve been all about my lips this month, and it’s safe to say that my old favourite MAC Chili has been a prominent feature for March.  It’s the perfect orange-red shade that really flatters my skin tone, and the idea was that maybe people would be too distracted by my bright lipstick to notice my flaky eyelid and manky-looking neck. I’m not sure if it worked but it gave me the balls to actually go outside, and that’s what matters. If I fancied something nude and less distracted, I of course reached for the Charlotte Tilbury Matte Revolution in Very Victoria, a new favourite of mine. For a pink lip, I’ve been loving the NYX Soft Matte Lip Cream in Cannes of late. Both Very Victoria and Cannes are prizes in my one year of blogging giveaway, so if you haven’t entered yet, you really should! 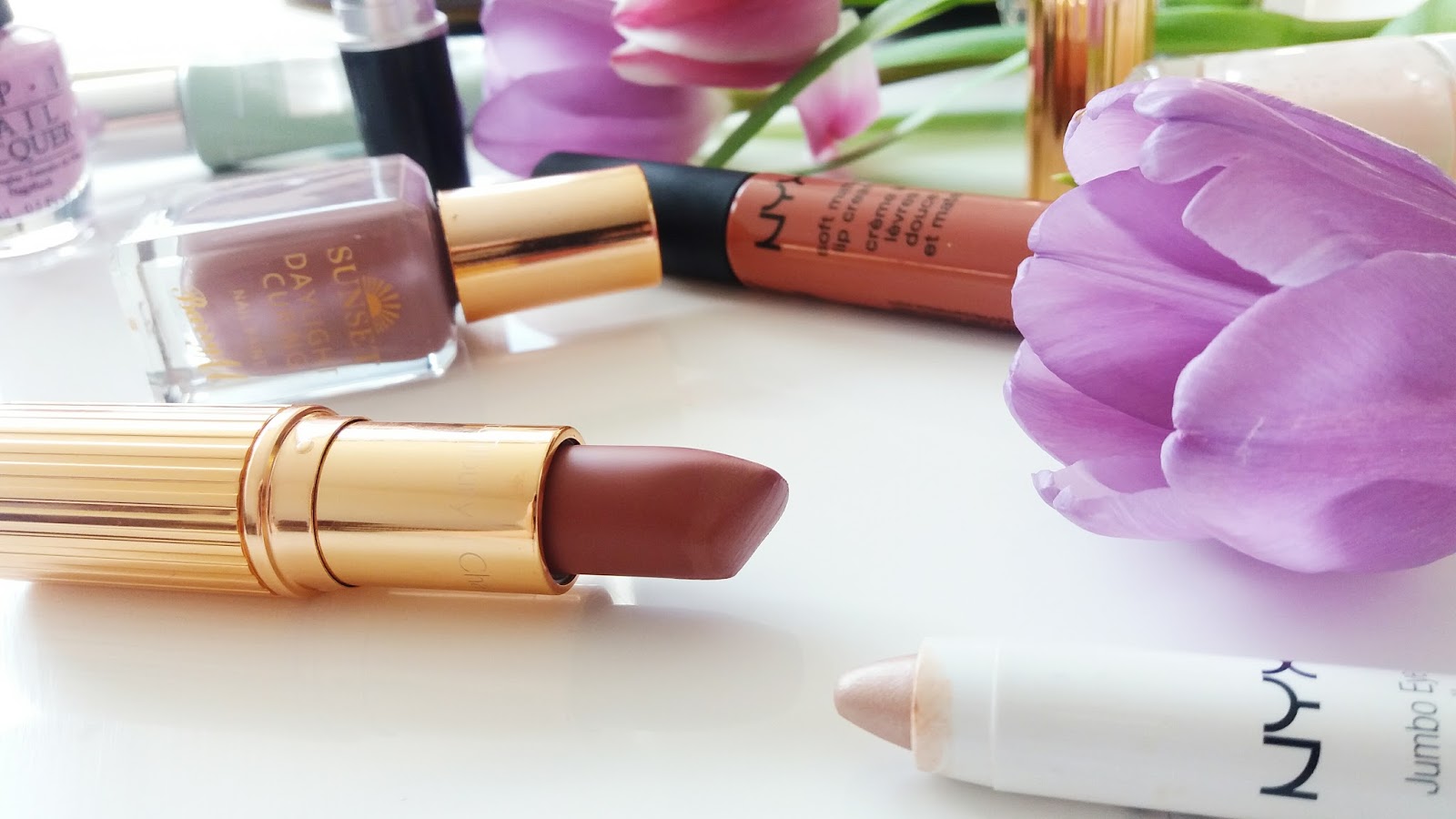 Shock, horror, I actually found time to do my nails this month! I am notoriously lazy when it comes to nails, frequently not bothering and only painting my toenails about twice a year. Since I was feeling pretty rubbish about my appearance this month, I decided that I could at least make my hands look pretty. The shades I’ve worn this month have been Barry M’s Dark Side of the ‘Shroom, which is an amazing taupe-purple, the pale pink shade that came with the March My Little Box, Smith and Cult’s Bitter Buddhist, a lovely sage green that I wear a lot, and the OPI Lucky Lucky Lavender. 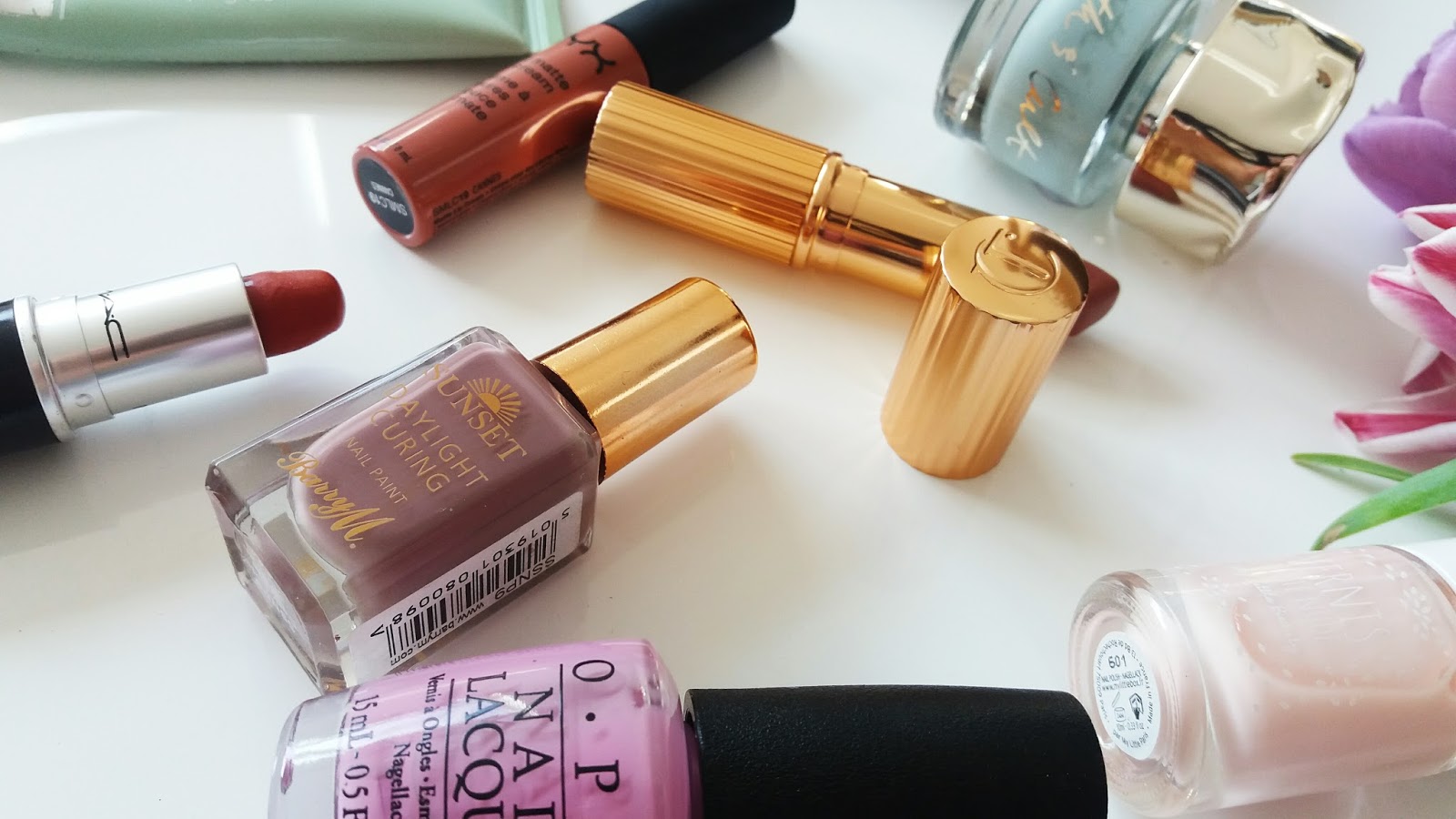 And that’s your lot! As I said, I haven’t worn a huge amount of makeup this month, and I suspect April will be much the same as I pray for my skin to recover. Wish me luck! Oh, the shoes that show up in some of the photos are these beauties from Topshop and I just wanted to use them in the photo. They’re completely unrelated to the post but I love them so much that I was just determined to shoehorn (geddit?) them in somewhere. Points to anyone who spots some of the liberally used blu-tack. 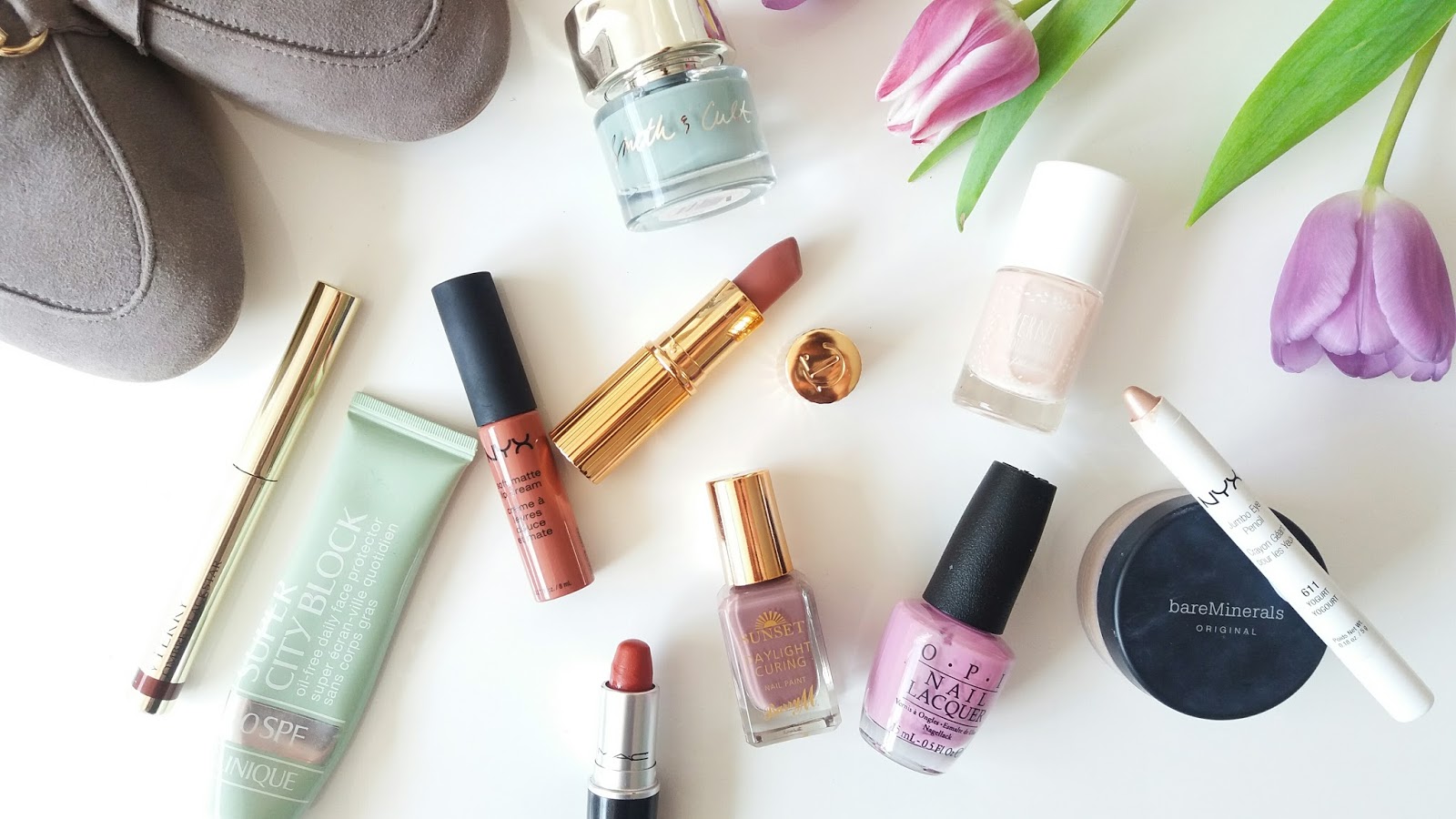