It’s the 15th of January and when this goes up I’ll be on my way to Salford Royal Hospital so they can stick a tonne of stickers on my back to try and figure out what I’m allergic to. I can’t really shower for a week (gross) and more to the point I CAN’T WEAR A BRA. Anyone that knows me will be aware that my boobs are on the larger side so this is truly catastrophic. I’m pretty much housebound for five days while working from home, so this week should be entertaining… 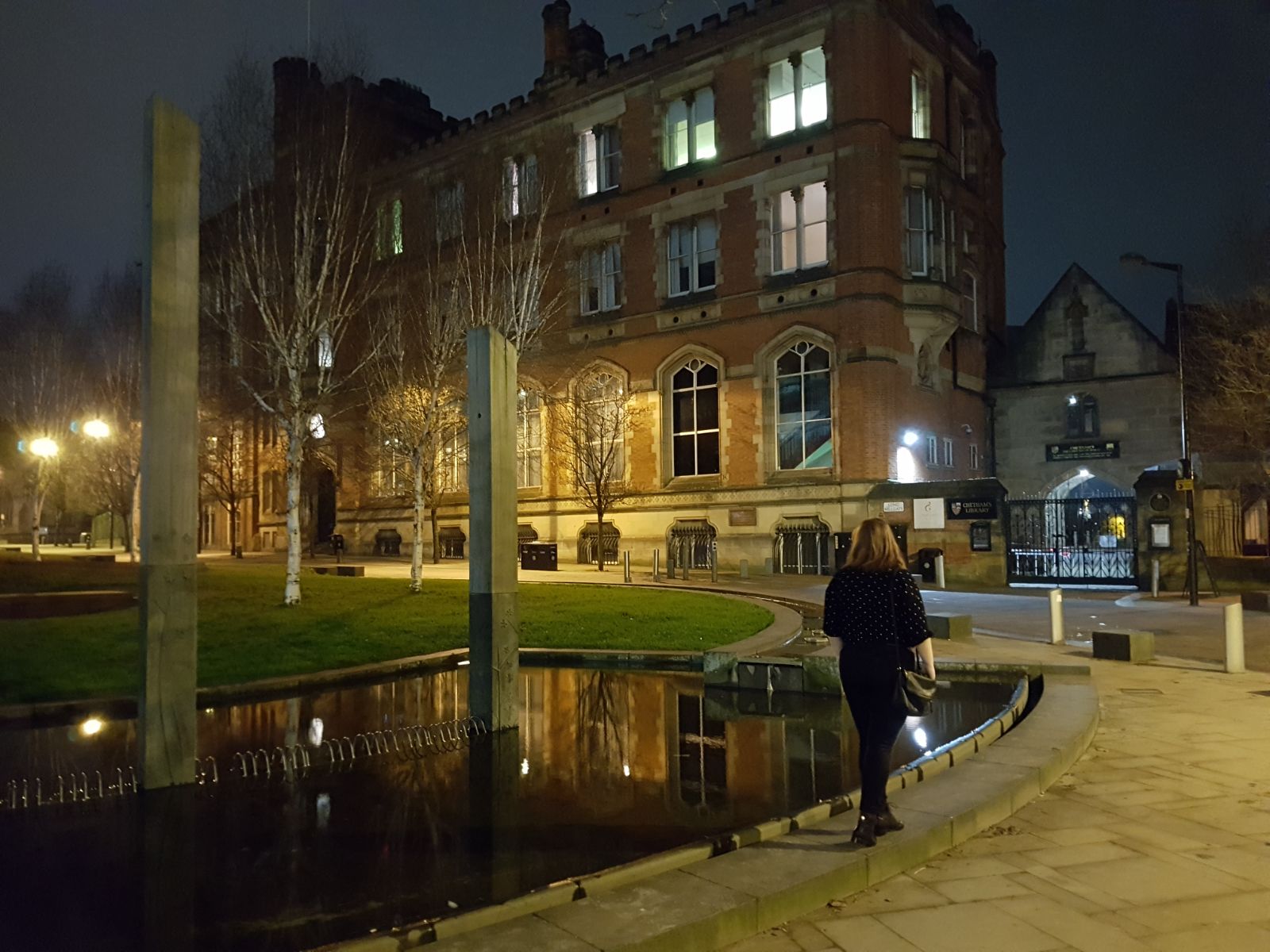 The photo above was taken late on Saturday night on our way home from a night out with friends. My boyfriend and I were both a little tipsy but I felt cute in my outfit (new polka dot shirt and I was loving it) so we snapped a few photos by Chetham’s School of Music. They’re dark and blurry but I love them. This is one of the ones that’s more in focus and features me trying to look poised by a fountain.

First up, blog posts! I have four favourite blog posts this week and they’re all amazing.

Chloe’s post on blogging when your eventual goal isn’t to be a full-time blogger really resonated with me and I freaking loved her outfit. She talks about the realities of working for yourself and the pressure to be a girl-boss. It’s not something I’m aiming for; this blog is purely for my own enjoyment and any money I make from it is just a bonus.

A different Chloe now over on The Little Plum, where an open letter to fellow people-pleasers caught my eye. I’m a notorious people-pleaser to the point that I always end up sucked into negative and unequal relationships. It’s something I’ve been working on for a long time, but this post really spoke to me. Chloe talks about the importance of being valued rather than liked, and that’s definitely something I need to remind myself of quite frequently. I bookmarked this post to reread whenever I need a reminder that I need to put myself first and let that bullshit go.
Now for a travel post! Iceland has always been on my list of places to go but never very near the top; Amy’s posts on her stay in Iceland, especially this one in the southern part of the island, have seriously sold it to me. The photography is beautiful and Iceland sounds incredible; I’m seriously considering trying to convince my boyfriend to book a holiday there next winter.

Finally, Holly’s post has the tongue-in-cheek title of ‘How to Train Your Boyfriend’ which earned a raised eyebrow from my other half when he saw what I was reading just now. It’s really about how she takes her photographs and coaches her boyfriend to be able to take the shots she wants. There are lots of handy tips for making the most of your photos and I think I might have to send this to my boyfriend for a read.

As for books at the moment, I’m really trying hard this year to read more often. I finished reading Autumn by Ali Smith on Thursday and enjoyed it, even if it was a bit odd. It was described as the first ‘post-Brexit’ novel, and it follows an Art History lecturer as she reconnects and reminisces with the old man she befriended as a child. It’s packed full of trains of thought and references to British pop art painters and the whole thing is very disjointed. It’s won a great deal of critical acclaim, and maybe it’s just too high concept for me but I felt like the disparate themes never really came together.

As for TV, I’m still loving Hunted which is back on Channel 4. I’m sure it’s not as realistic as they make it seem, but I do really fancy the idea of going on the run for a few weeks, although I’d probably be found really quickly as I’d just go to my Nan’s house.