If you’d asked me that a month ago I would have said no. Or at least, I would have said not in my case. I have a habit of falling for my friends, which always seemed natural to me. They’re my friends, so clearly I like their personality and enjoy their company, so it never seemed that strange to me when I inevitably developed a crush, however fleeting, upon one of my male friends. A crush would complicate any FWB situation and for that reason, I never thought it would be my thing. 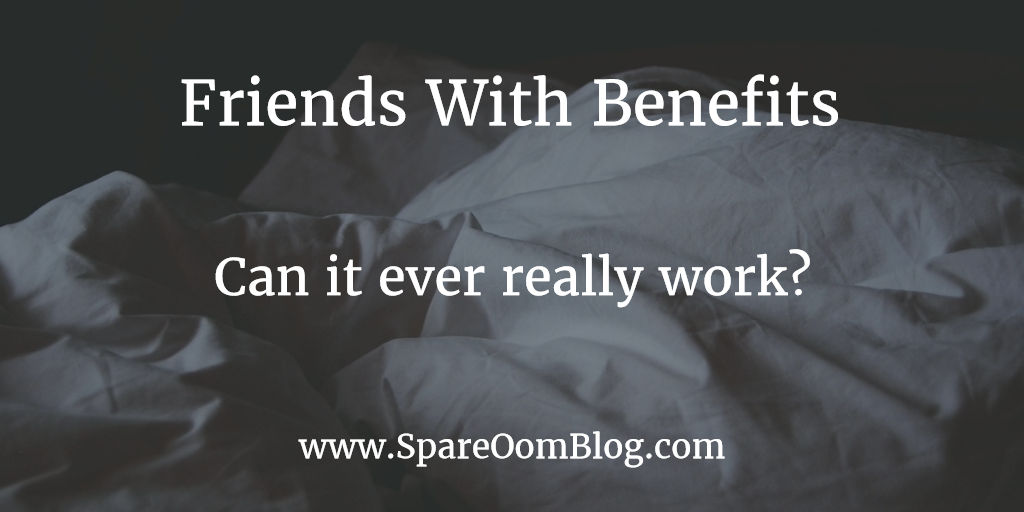 There was a time several years ago when I was not quite friends with benefits with someone. It never progressed to the point of actually having sex, but generally fooling around was something that happened semi-frequently. The problem? I was completely and utterly in love with the guy. While he was very clear that he was not looking for any kind of relationship, he definitely took advantage of my feelings. I won’t go into details here, as it is neither the focus of this blog post and I’d rather not dig up bad memories, but I was pushed and cajoled into things I was definitely not comfortable with. Ultimately I confronted him, and it’s never been the same between us, which is definitely for the best.

What I really want to talk about today though is my current FWB situation. I recently reconnected with an old friend, one who I’ve known, albeit with intermittent contact, for almost nine years. We get along like a house on fire, and can easily spend several hours talking on the phone before realising that it’s three in the morning and we really should go to sleep now. We’re both single, and if I’m honest we’re both a little lonely and missing that human contact you get while dating. We met up in Manchester for a catch-up, which mostly involved eating chilli and watching TV while drinking, until one thing led to another.

We’ve met up a few times since then and have followed a similar pattern. We pretty much just enjoy each other’s company as we always have, and then sometimes, if we feel like it, we have sex. That’s about it. Bizarrely, my concerns about developing feelings for him have yet to bear any fruit. In fact, the more we do this, the more confident I am that that won’t happen. It sounds strange, at least to me, but the truth is that we simply have fun together as we always have, but now we sometimes have fun in a slightly different way.

The only thing I’m not sure on is how I would feel if he was sleeping regularly with other people. Mentally, I have absolutely no objection to it and would congratulate him for pulling. Deep down, though, I think I don’t like sharing. There’s also the STD dilemma as well, and I’m just not sure I would be completely comfortable with it. A friend I talked to about this queried whether that was evidence of burgeoning feelings, but I’m confident that it isn’t. As gross as it sounds, it’s partially a hygiene thing. The other side of it, the not-sharing part, worries me a little; I can’t quite pin down why I feel that way. It’s not like I have an issue with sharing anything else in my life; it’s more just a slightly icky feeling. That makes very little sense, but it’s the best way I can think of to describe it.

Am I crazy? Am I kidding myself? I don’t know the answer to those questions yet. For now though, I’m having fun, noone is getting hurt, and there are zero feelings involved. I also think that if we were to stop right now, we could very easily go back to how we were. I think even if one of us did start to develop feelings for the other, we would just back off and would still be able to be good friends.

I don’t really know what I’m doing, but so long as we’re both having fun and there are no romantic feelings on either side, I don’t see any reason to stop. If one of us starts dating it would be a different story, but with the way things currently are I don’t see that happening for myself anytime soon. I’m just going to keep fumbling along, and most of all, I’m going to keep having fun.

I really hope my Mum never reads this.

Hopefully, you’ve enjoyed this post, and if so keep an eye out as this is part of my Blogtober series where I post every day.  Check out my other posts from this month and see whether I actually manage to even think of 31 topics!