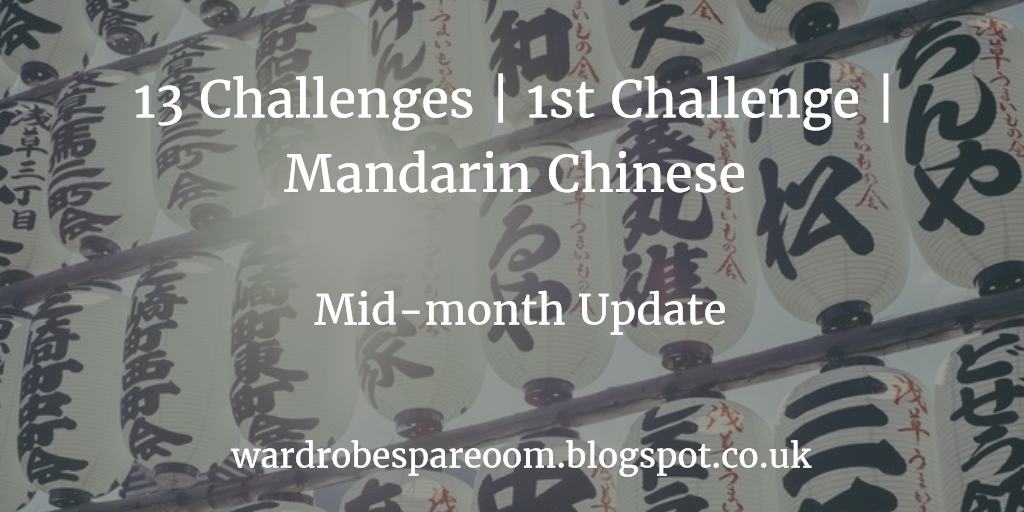 It is recommended that you read this post first if you have no idea what I’m talking about!

I’m halfway through the first month of my thirteen month challenge.  I think I aimed pretty high this month, as I kind of forgot how difficult Chinese is.  I had revised everything I had done previously in the first week, which was fairly easy and came back quite quickly.  Learning new vocabulary without a Chinese teacher to help correct my pronunciation has been hard.  I think I’m saying things correctly, but no doubt I sound a little bit like when I went to Greece and spoke modern Greek with the inflections of ancient Greek, and the locals laughed at me a lot.  I suspect it would be the same if I attempted to converse in Chinese at the moment – I’d be understandable, but sound like an idiot foreigner (which is exactly what I am).

As for conversation topics, I can hold an in depth conversation about super complex topic like where I’m from and my birthday.  Clearly I am close to fluent.

All joking aside, it’s nothing fancy, but I’ve got the foundations in and just need to build on them.  I’ve learned most of the grammar (there isn’t much), and now it’s just a matter of vocabulary, which is probably going to take the rest of my life to learn.

I took note of what I did everyday, which I’ve typed up here as it clearly demonstrates my waxing and waning motivation. This is literally what I wrote in my notebook at the top of my notes.

Day 1: YEAH. Motivated. Memrise, textbook, ALL the Chinese!
Day 2: I remember nothing.
Day 3: I would like to sleep please
Day 4: Kill me please, I can’t hear the difference between first and second tone
Day 5: Time to actually get back to work! CHINESE BITCHES
Day 6: Chinese or Mad Max?
Day 7: Okay, I could do some Chinese, or I could eat an entire pack of chocolate digestives.
Day 8: I WILL BE THE QUEEN OF CHINA
Day 9: no.
Day 10:Textbook time
Day 11: More Memrise & vocab
Day 12: Grammar? Bitch please.
Day 13: I’d rather be watching The Walking Dead.

Yeah, I’ve had some ups and downs.

So far so good, I just need to keep this up for another two weeks and then it can go on a bit of a back burner while I work on something else.

Someone suggested in the comments that I learn calligraphy at some point which sounds like a great idea!  If anyone else has any suggestions for what I should do next month, hit me up in the comments and I’ll pick a few then do a twitter poll so you can ruin my month.

I’ll update you at the end of the month when I’ll totes be fluent. TOTES.