I wrote a post like this back in October, also entitled The Good, the Bad and the Patchy but for liquid lipsticks, and I fancied doing something similar for cream eyeshadow sticks. I’ve really been getting into them of late and have found that they vary in quality massively. I recently had an allergic reaction to a Clarins primer, which left me with sore, dry eyelids. While I avoided wearing eye makeup as much as possible, when I did have to I wanted something that wasn’t going to cling to the dry patches and make it look worse. My eyes are pretty much healed, but I’m still enjoying using cream eyeshadows. I picked up six eyeshadow sticks in total, generally in warm bronze or gold shades as that’s my go-to eye look. The price and quality vary, ranging from £4.49 to £29, but it’s not all a matter of getting what you pay for. 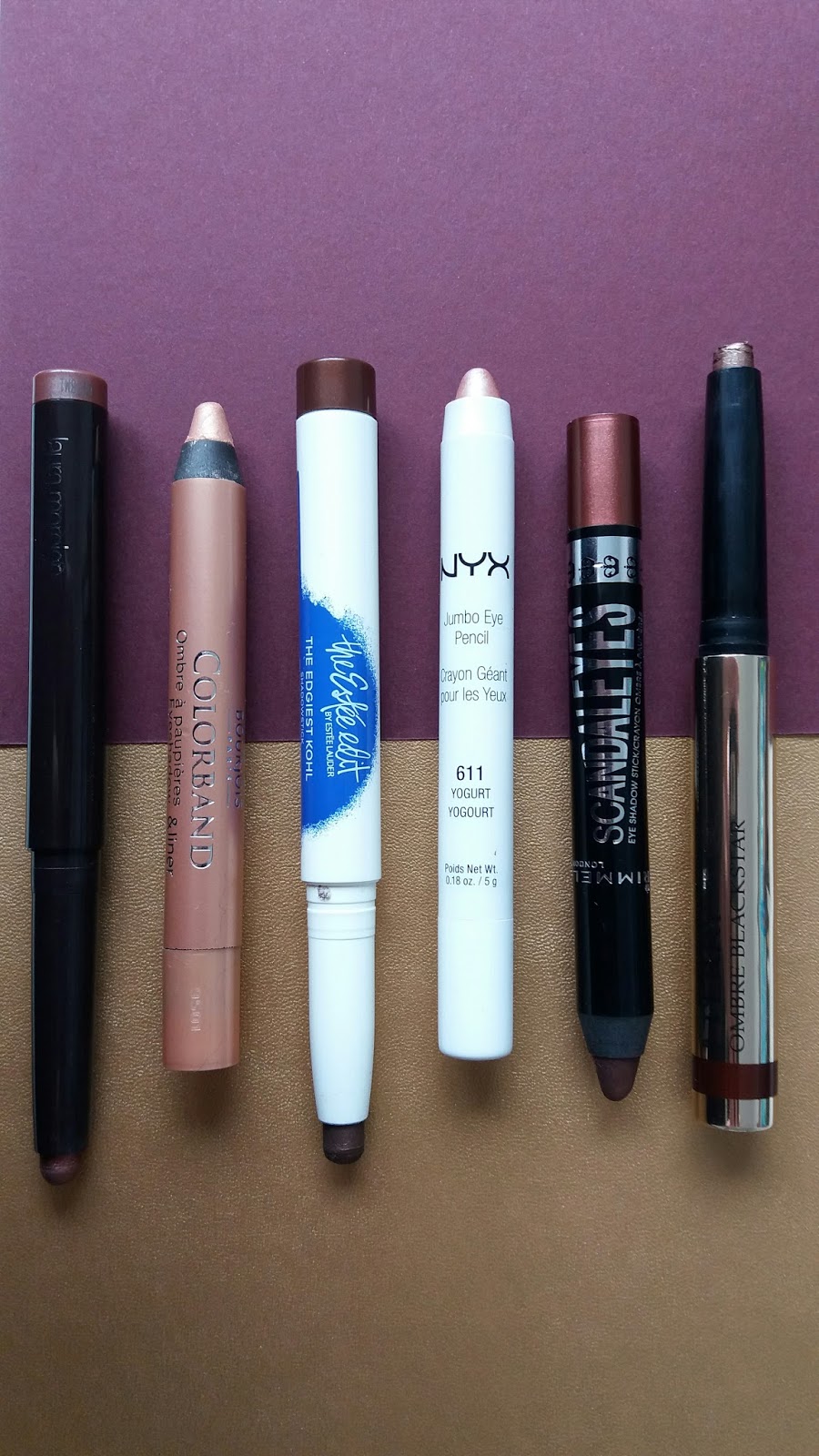 The cheapest of the cream eyeshadow sticks that I found, this a really gorgeous colour. In fact, it’s a decent colour dupe for the Laura Mercier shadow below, which is nearly £20 more. It’s a gorgeous metallic bronze that doesn’t crease much even on my oily eyelids. Unfortunately, I really struggled to get this to apply evenly and just generally made a mess when using it. I’ll use this going forward, but probably only as a slight smudge on the lower lash line. There are seven shades in the range, which is pretty good for the drugstore, but I don’t think I’ll be buying any more of them.

This eye pencil from Nyx is in a slightly unusual shade for me; it’s a lovely pale gold with a metallic pink shift and looks gorgeous on the lid. It’s a super creamy formula, which unfortunately means it creases a lot. You can sort of smudge it back onto the lid when it does crease, but that’s not exactly ideal; it’s also not great as a base for powder eyeshadow because it’s so creamy. I suspect that it would work a lot better with a primer, but I’ve yet to find one that I’m not hideously allergic to. If your eyelids aren’t too oily this could be a really great bet, as it’s cheap as it chips and has an amazing shade range. Despite the creasing, I probably would buy more of these, as they’re great to just throw in your handbag for touch ups. One thing to note is that the product is literally just the tip, as the packaging is plastic it can’t be sharpened and there’s no wind-up function. If you consider that then the price isn’t quite as good value for money as some of the other products I bought.

I had real trouble testing this eyeshadow as it broke almost immediately. With a bit of work, I managed to test it out as both and eyeshadow base and alone and was generally underwhelmed. Despite the shade name, the colour is definitely more gold than beige and initially promised to be a really lovely colour that I would get a lot of use from. The colour may be great, but the reality was creasing and patchiness. There also wasn’t a great deal of pigmentation to work with, which combined with the pretty pitiful shade range means I won’t be buying more of these, especially since I think it’s grossly overpriced compared to the Nyx Jumbo Eye Pencil. 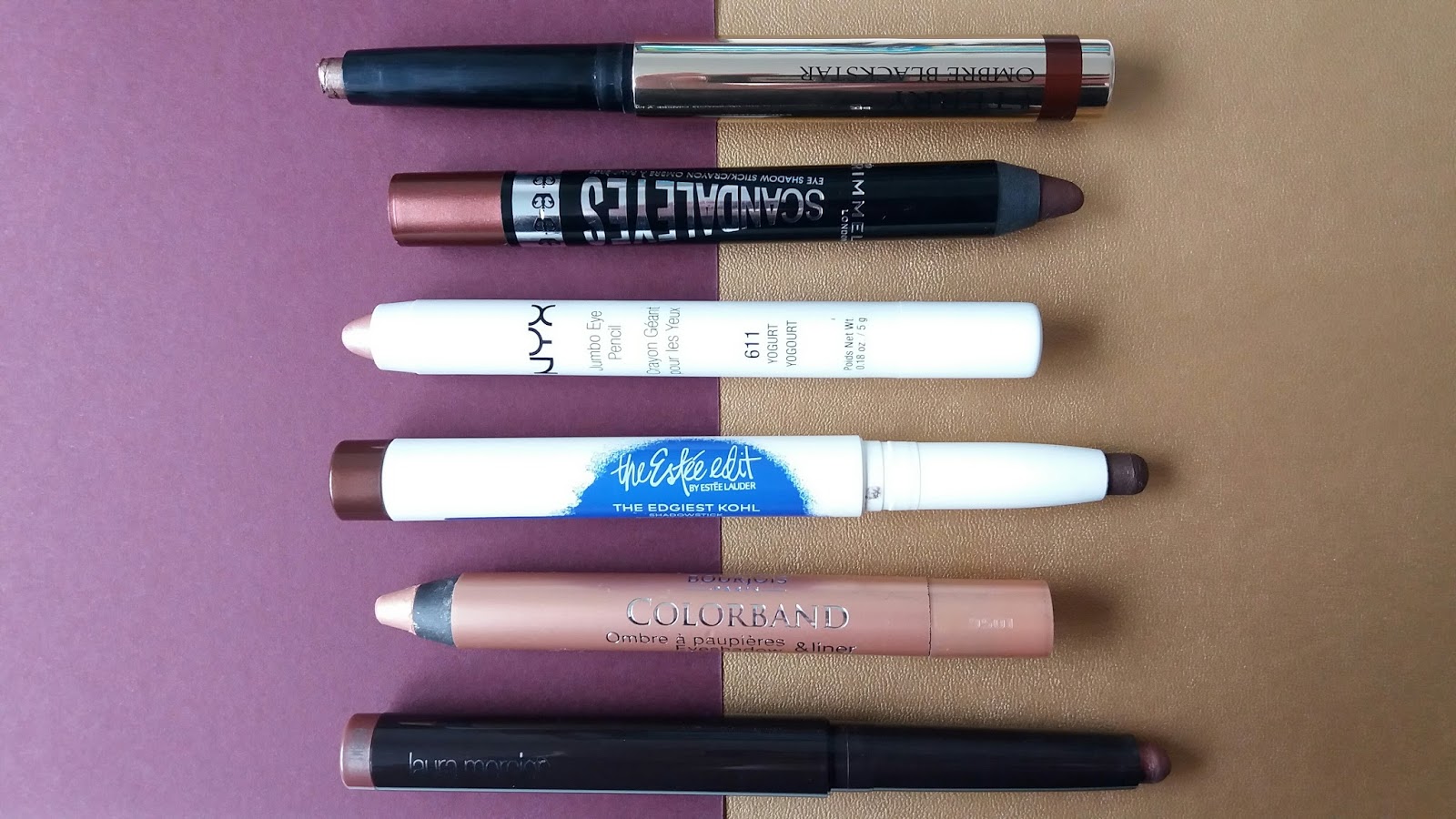 The Edgiest Kohl Shadowstick is without a doubt, the biggest waste of money I have ever spent. I’m genuinely angry about it. For SEVENTEEN POUNDS you get a crappy eyeshadow that is the patchiest thing I’ve ever seen. It doesn’t even swatch well. When I bought it I must have been drunk or something because I swear it wasn’t nearly as bad. It’s dark brown with a slightly metallic finish, which sounded right up my street. Unfortunately, one swipe of this stick doesn’t provide much in the way of pigment, and should you attempt to layer it all hell break loose. Layering the shadow actually moves it around, leaving you with product build up in strange places on the lid and nothing where you actually need it. I tried to make this work multiple times to no avail, and I’m just so angry that this cost £17. If it was a fiver, I would have been forgiving and just binned it, but this is made by Estee Lauder – what the hell?!

This is probably my favourite find from my venture into eyeshadow sticks. A gorgeous reddish-bronze, this works particularly well as a base for powder shadows. It genuinely doesn’t budge despite my oil-slick lids, although you do have to work fairly quickly with it to blend it out before it dries down. It is a touch drying on the lids, and as mine are still recovering I wouldn’t use this two days on the trot as my eyelids do feel a little dry afterwards, but I think that’s down to the contact dermatitis rather than the product. The shade range for the Caviar Eye Sticks is amazing, but for the price, the packaging is a little lacking. It feels plasticky and cheap, but I can live with that for the great product inside. I’ll be buying more of these.

The Ombre Blackstar was the first eyeshadow stick I ever bought, and although I was initially quite disappointed, I’ve grown to love it. Its claims of being creaseproof are false, but it is great as a base for other products. It’s also the most pigmented shadow stick that I tried, needing the lightest of touches to cover the whole lid, and is wonderfully creamy and blendable. I wouldn’t wear it alone as the creasing if pretty obvious, but when paired with a little powder eyeshadow it almost sets the product, helping it to last all day without smudging to creasing. The shade range is good, with occasional seasonal shades being added for a limited time, but the price is a sticking point for me. While I probably will buy more of these, it will only be if I really adore the colour and there isn’t a Laura Mercier equivalent. The packaging on the Ombre Blackstar is better quality that the Laura Mercier Eye Colour, but it’s worth noting that after I dropped this once the lid no longer clicks and will just fall off. 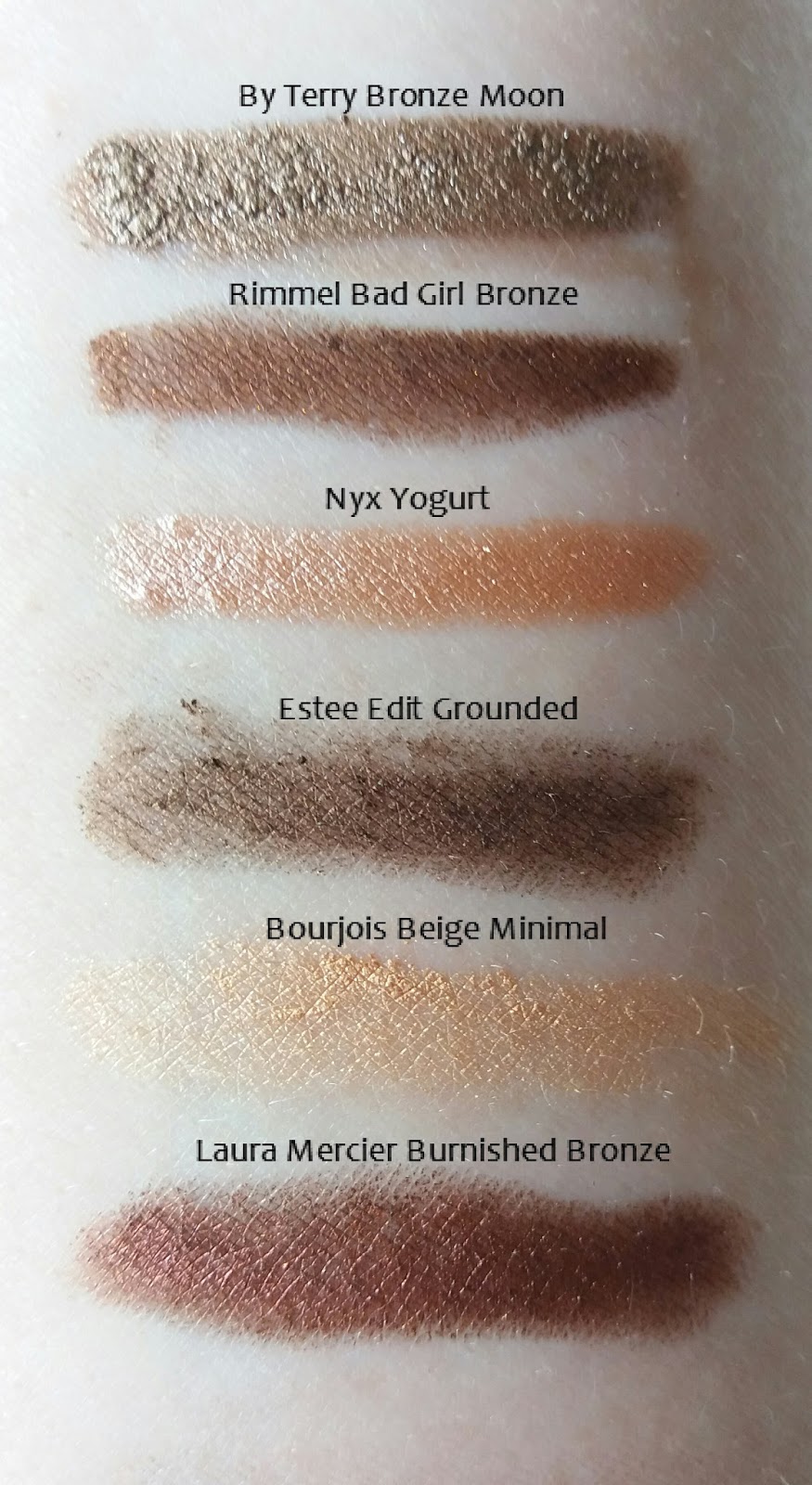