If you’re anything like me, coffee is sometimes the only way you get through the day. When I’m in need of a serious nose-to-the-grindstone blogging day, I head out of the flat and into town with my laptop to a place with good coffee and free WiFi. I like the combination of people and chatter all around, while I’ve got earphones in and a laptop in front of me; I feel like I’m on a little island watching the world go by, and it’s one of my favourite things to do. I’ve put together three of my favourite places in Manchester to sit and chill with a flat white or type frantically. If you’re ever around town and craving caffeine I highly recommend checking one of them out! 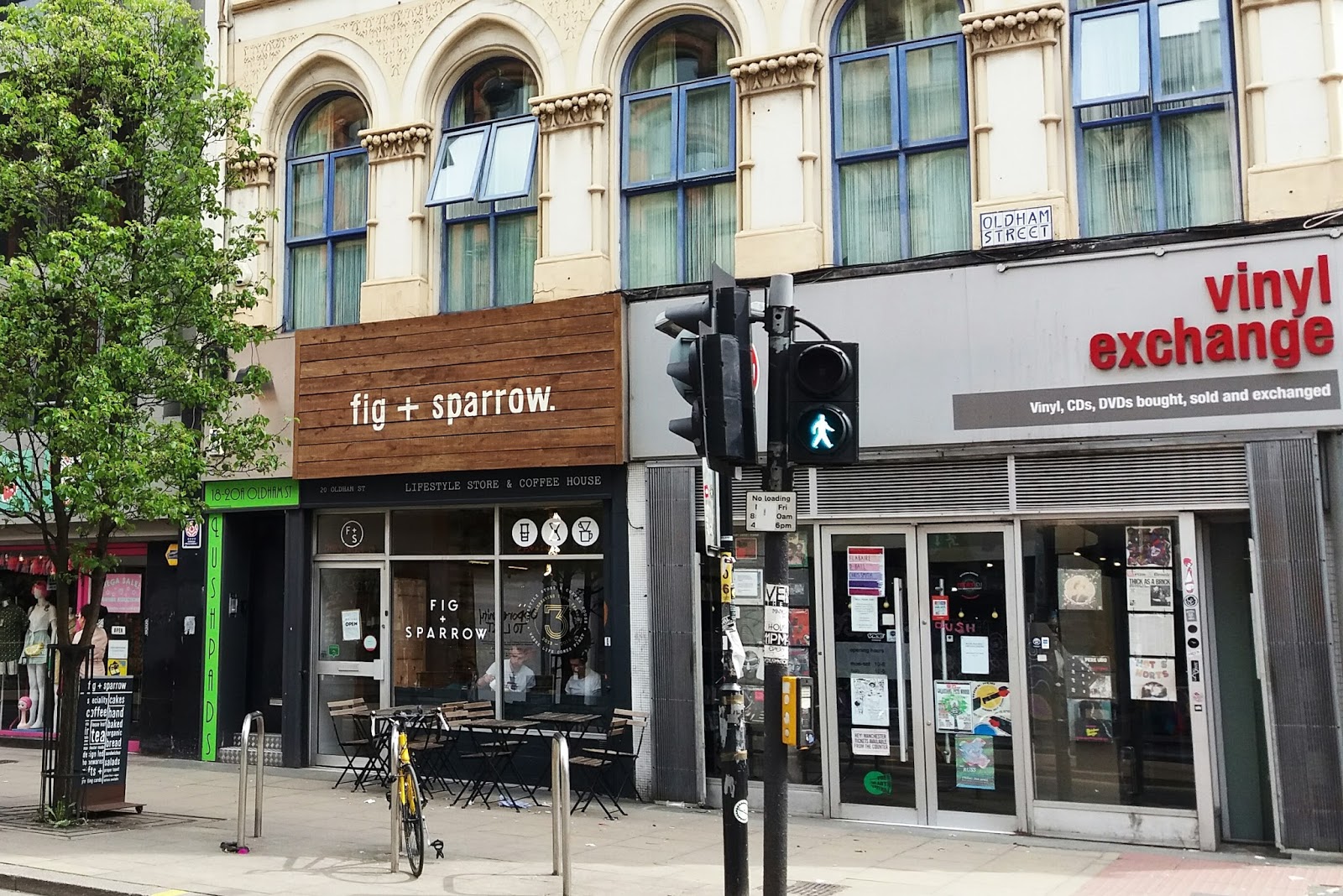 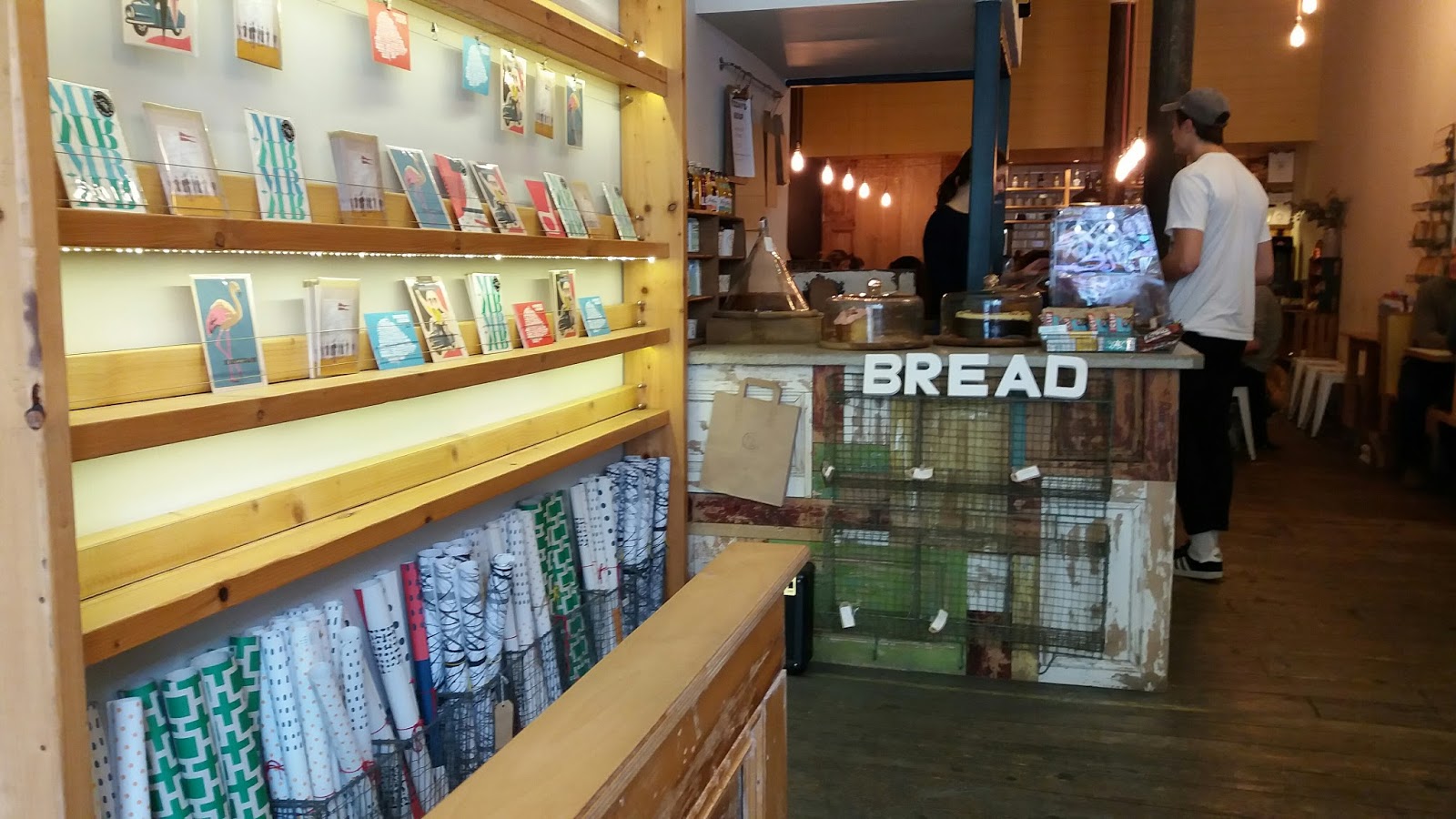 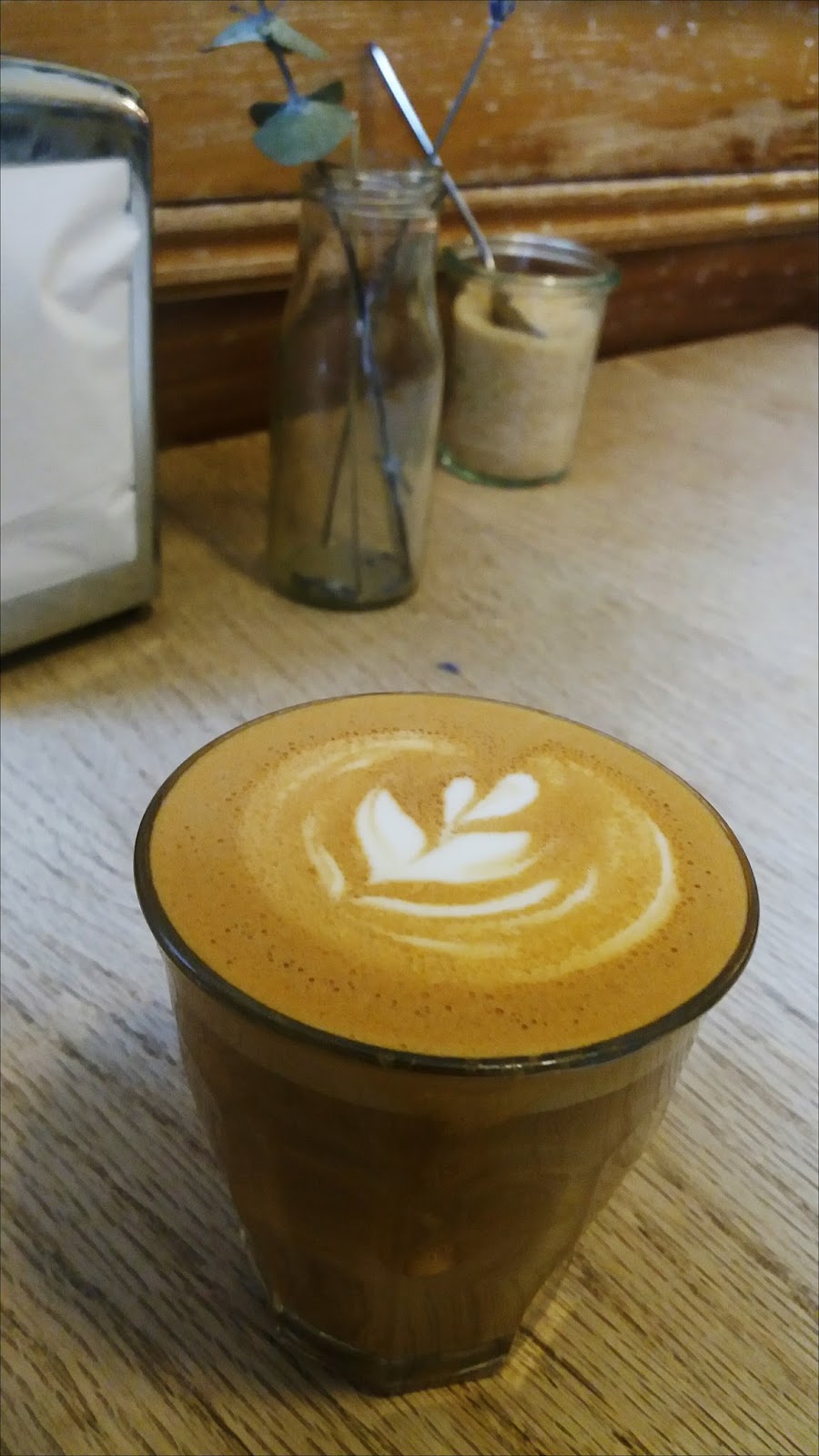 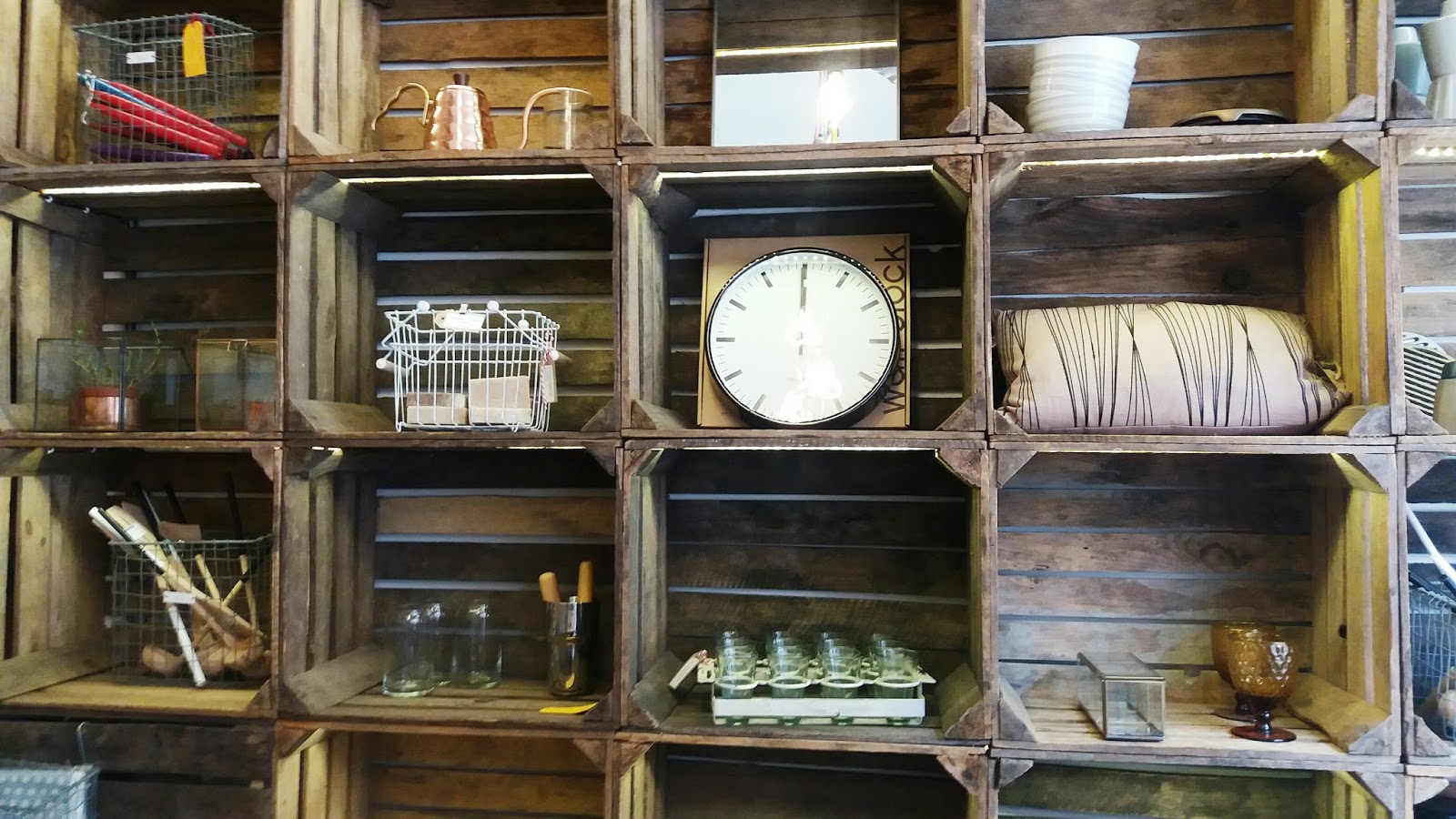 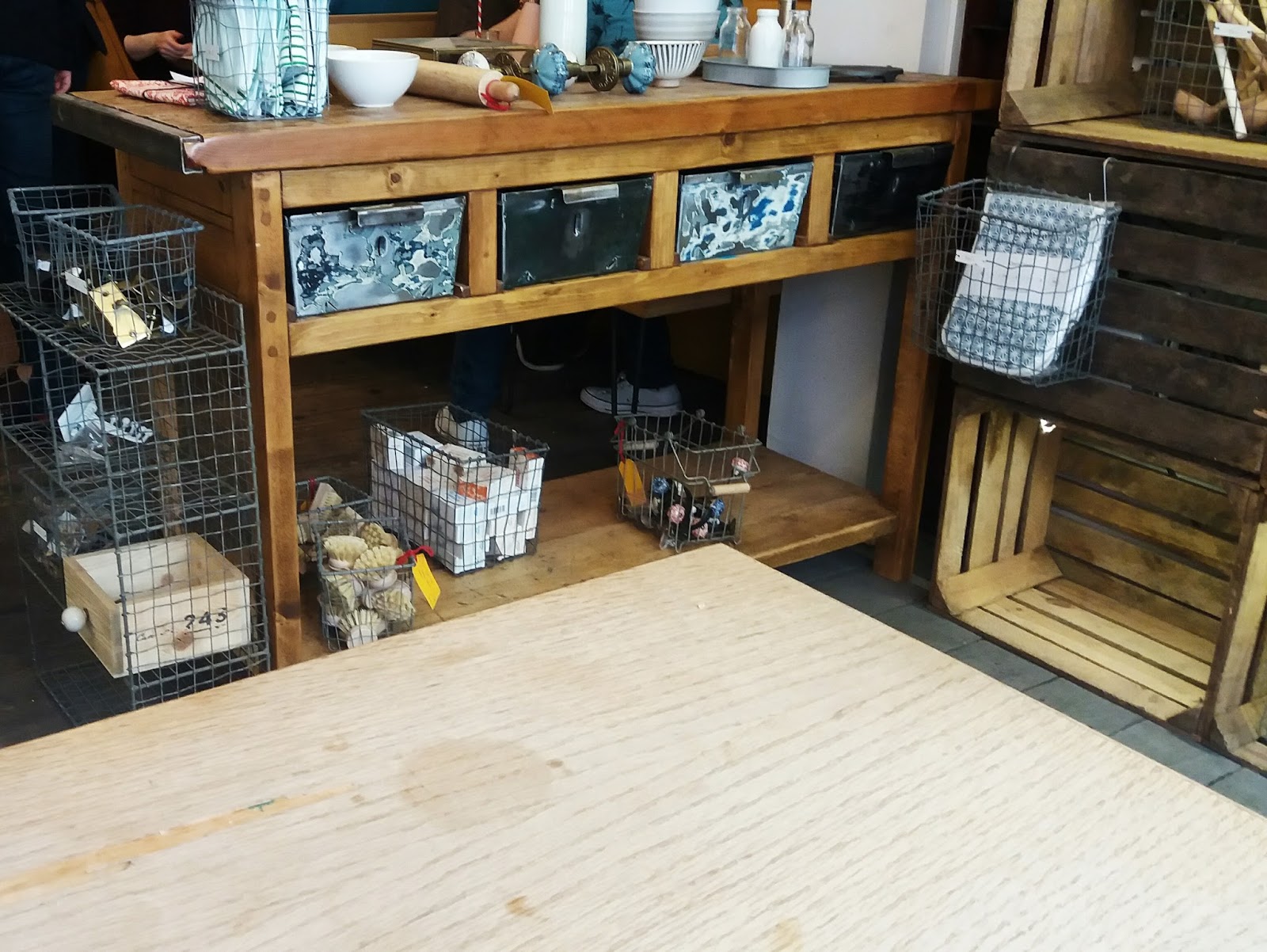 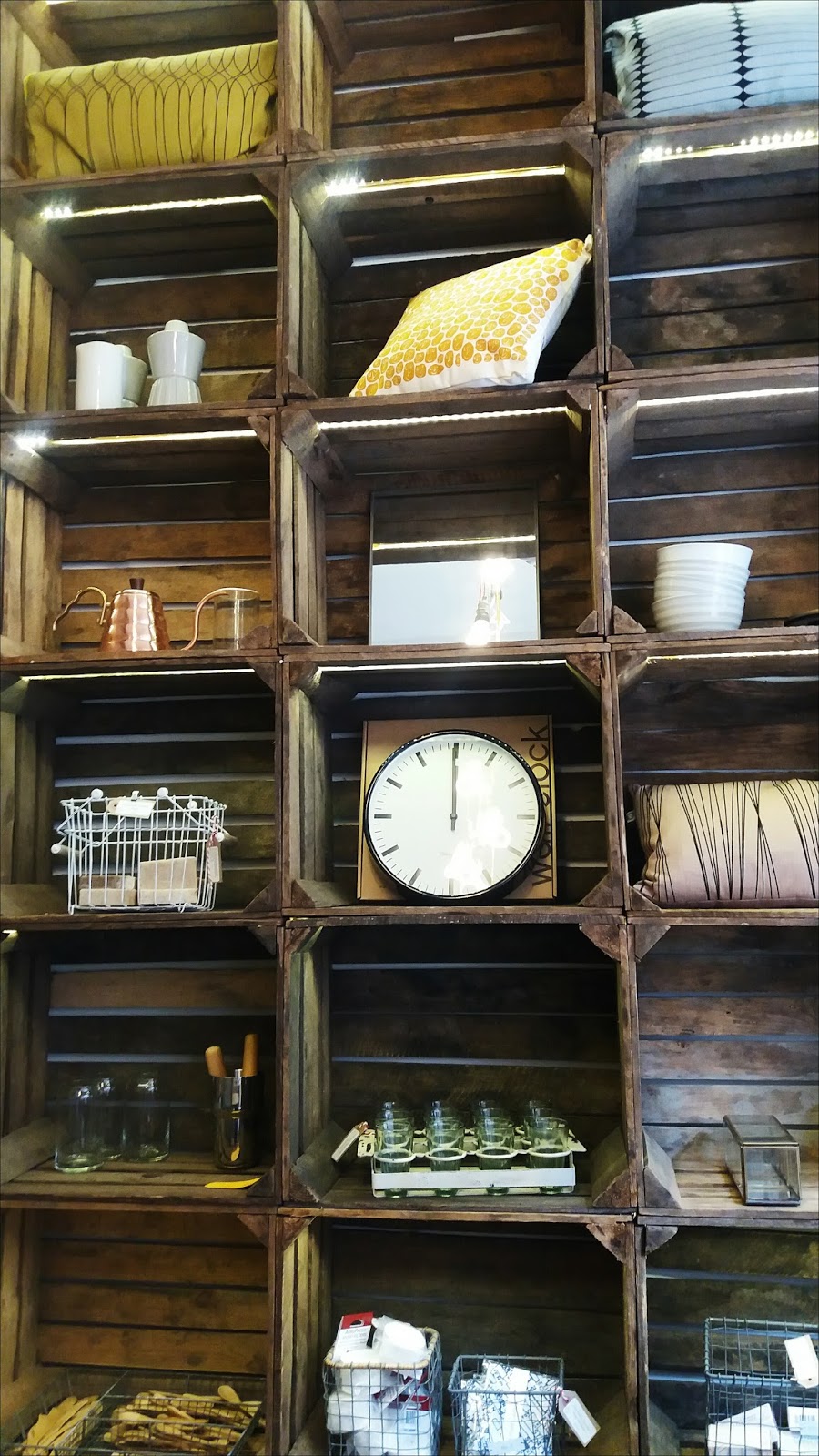 Fig and Sparrow has a kind of homely-hipster vibe, in that you’ll find it full of bearded men in beanies and ripped jeans, but you’ll also spot middle-aged couples drinking tea in the corner and families scoffing beans on toast in the window. The vibe is friendly, popular with people from all walks of life. I feel comfortable there and tend to end up spending longer than I intended to chilling and working. They serve a damn good flat white or a pot of Jasmine Green Tea for £2.60, which are my beverages of choice in most coffee shops. The coffee and tea menu is large but not overwhelming, and the staff are friendly and will chat to anyone who fancies a natter, but equally, know when to leave you alone. It’s fairly small and gets busy quickly, so I’d recommend avoiding the lunchtime rush if you can.
Fig and Sparrow also stock bread from the ever elusive Trove bakery, a Manchester legend, but you’ll have to get there early if you want to buy a loaf to take home as it’s generally sold out well before noon. Trove’s bread features on the rustic food menu, which is small but hearty. Expect all the toast toppings you could desire; I know we’d all pick avocado but sometimes beans on toast is just what you want. Next time I’m there I’m definitely buying a sandwich because they sound incredible! Think houmous, carrot and sun-dried tomato, organic cheddar, fig jam and parma ham or mozzarella and pesto, and the bread is all from Trove, so I might try the olive and rosemary bloomer, or the rye and fennel sourdough…I’m getting hungry.

Bizarrely, Fig and Sparrow is also a homeware shop, selling a multitude of accoutrements including, from a very quick glance around, whisks, ladles, jars, cushions, wrapping paper and kitsch cards, whisky glasses, clocks, mirrors, shopping bags, teapots and candlesticks. It’s just off the beaten track, less than five minutes from the swarming masses surrounding Piccadilly Gardens, Primark, Debenhams and Market Street and just by Afflecks. It’s become a local hotspot for hot strong coffee away from the folks who’ve come for a day’s shopping. 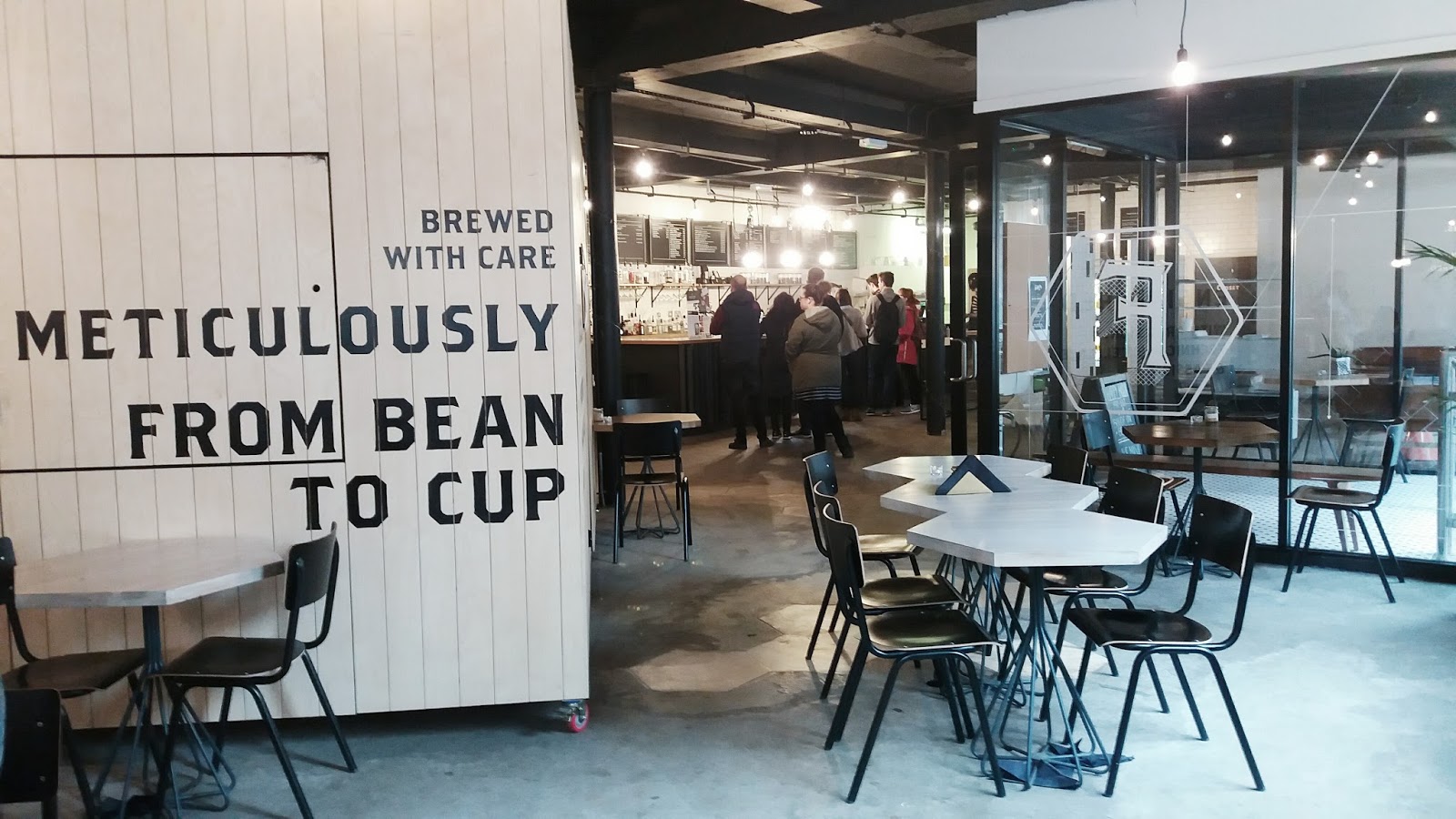 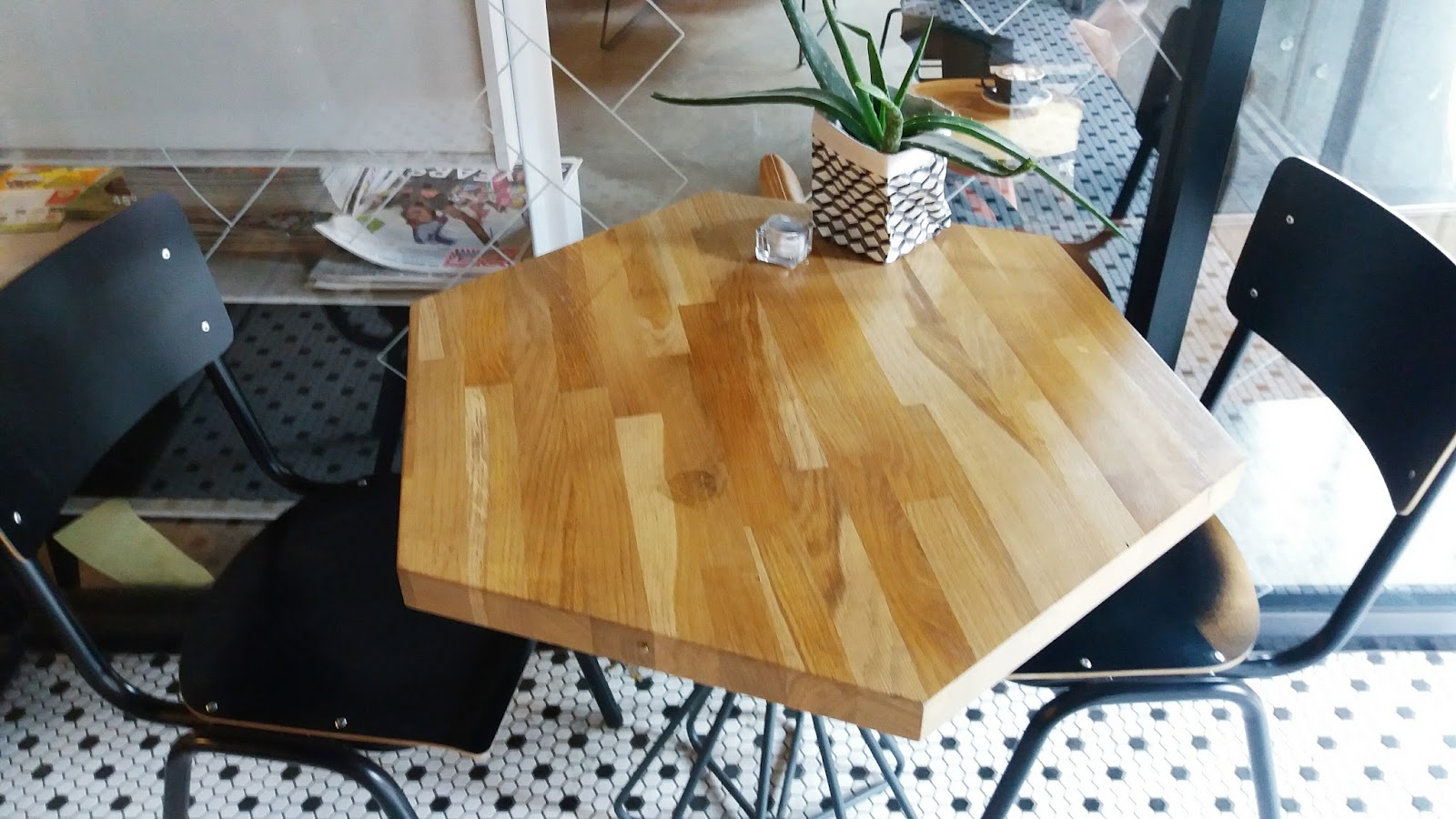 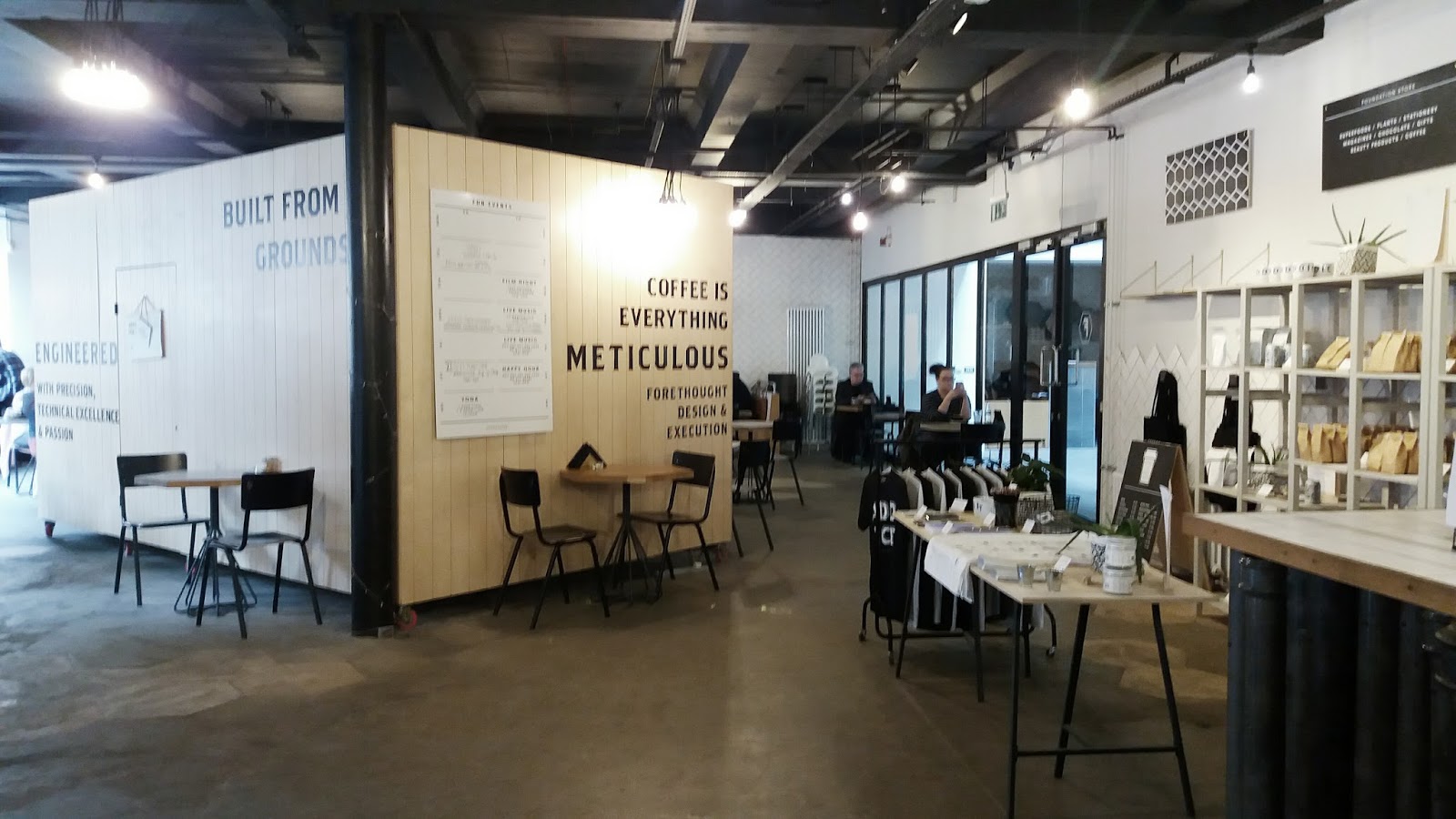 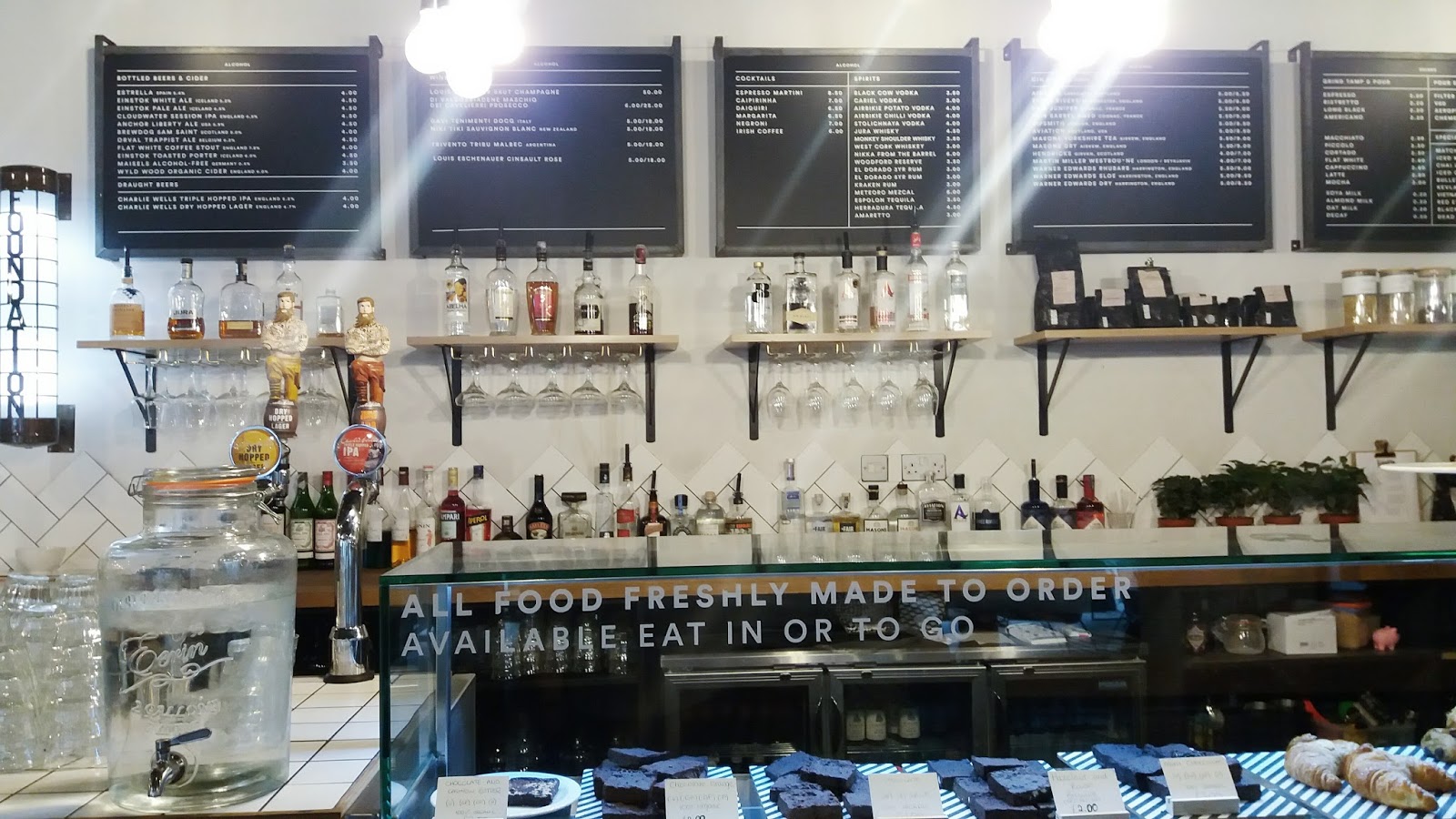 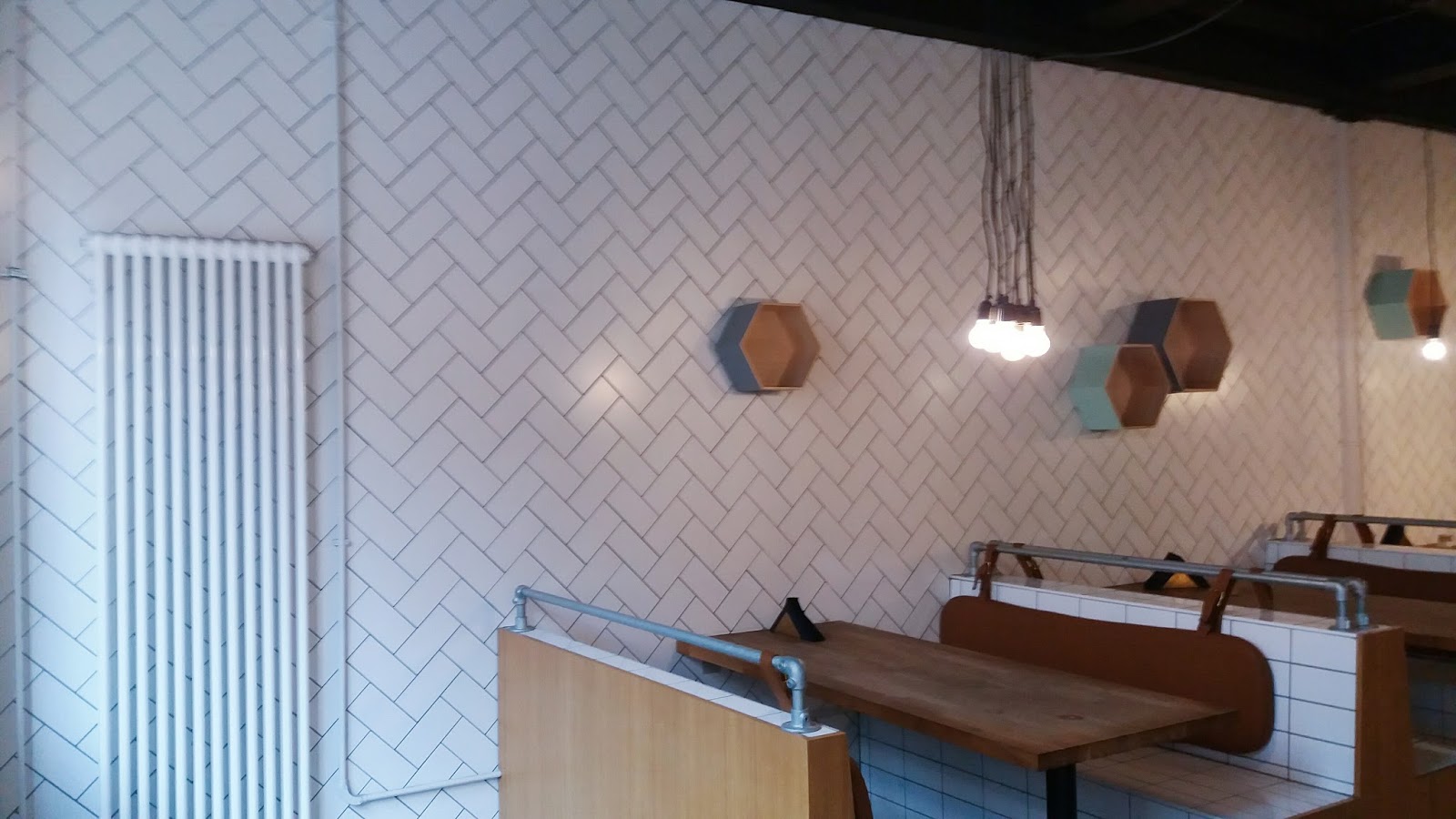 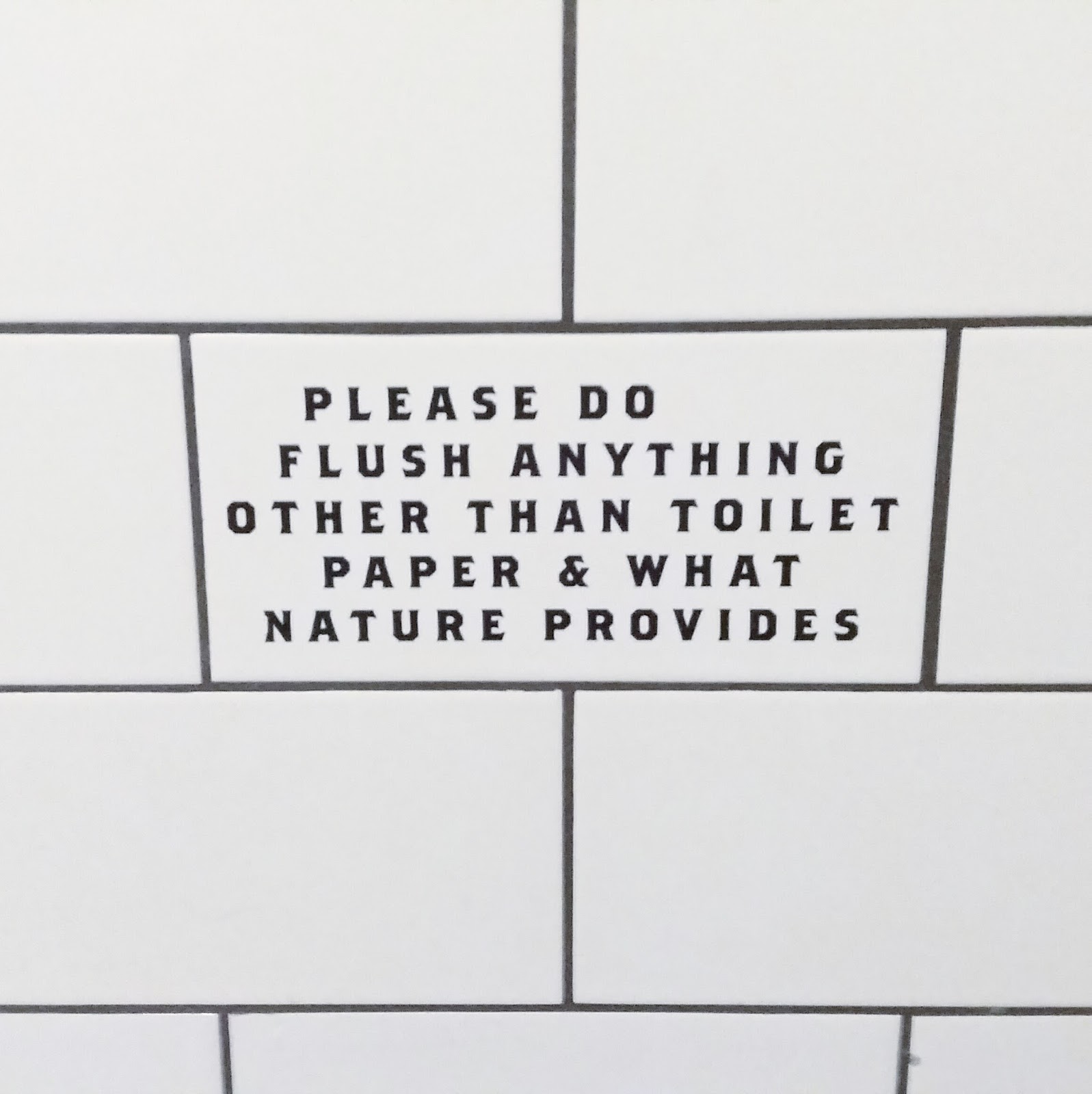 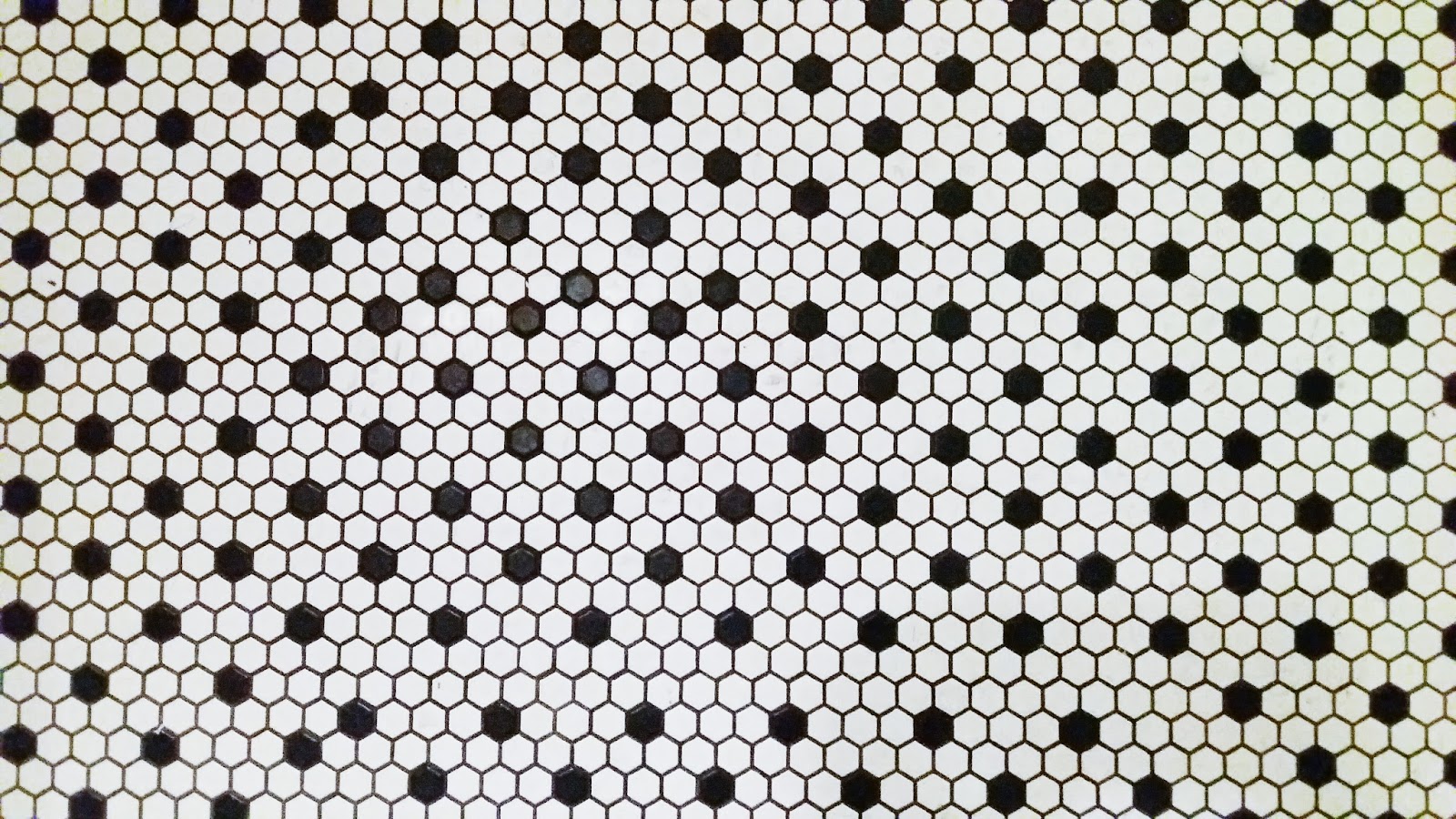 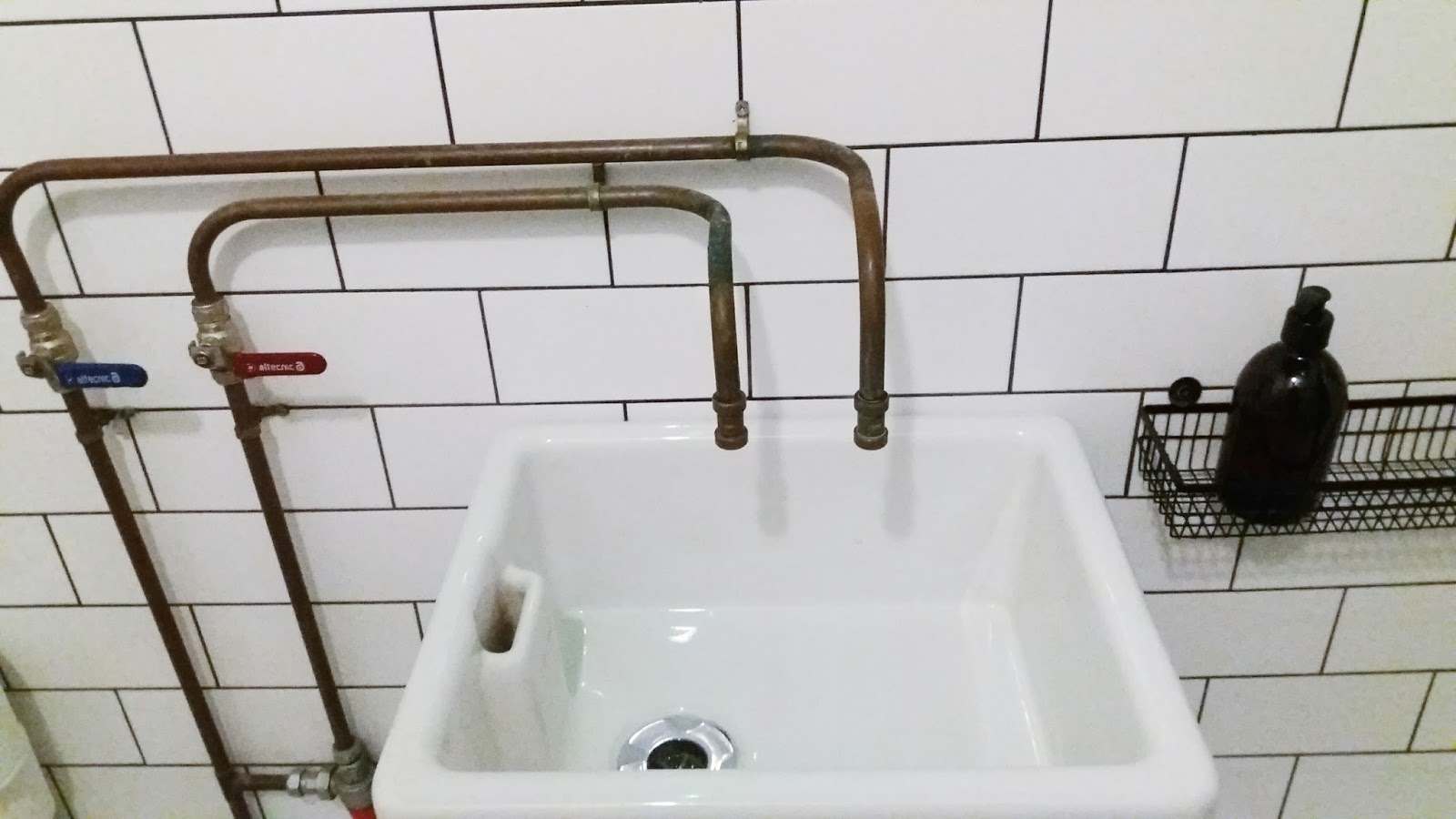 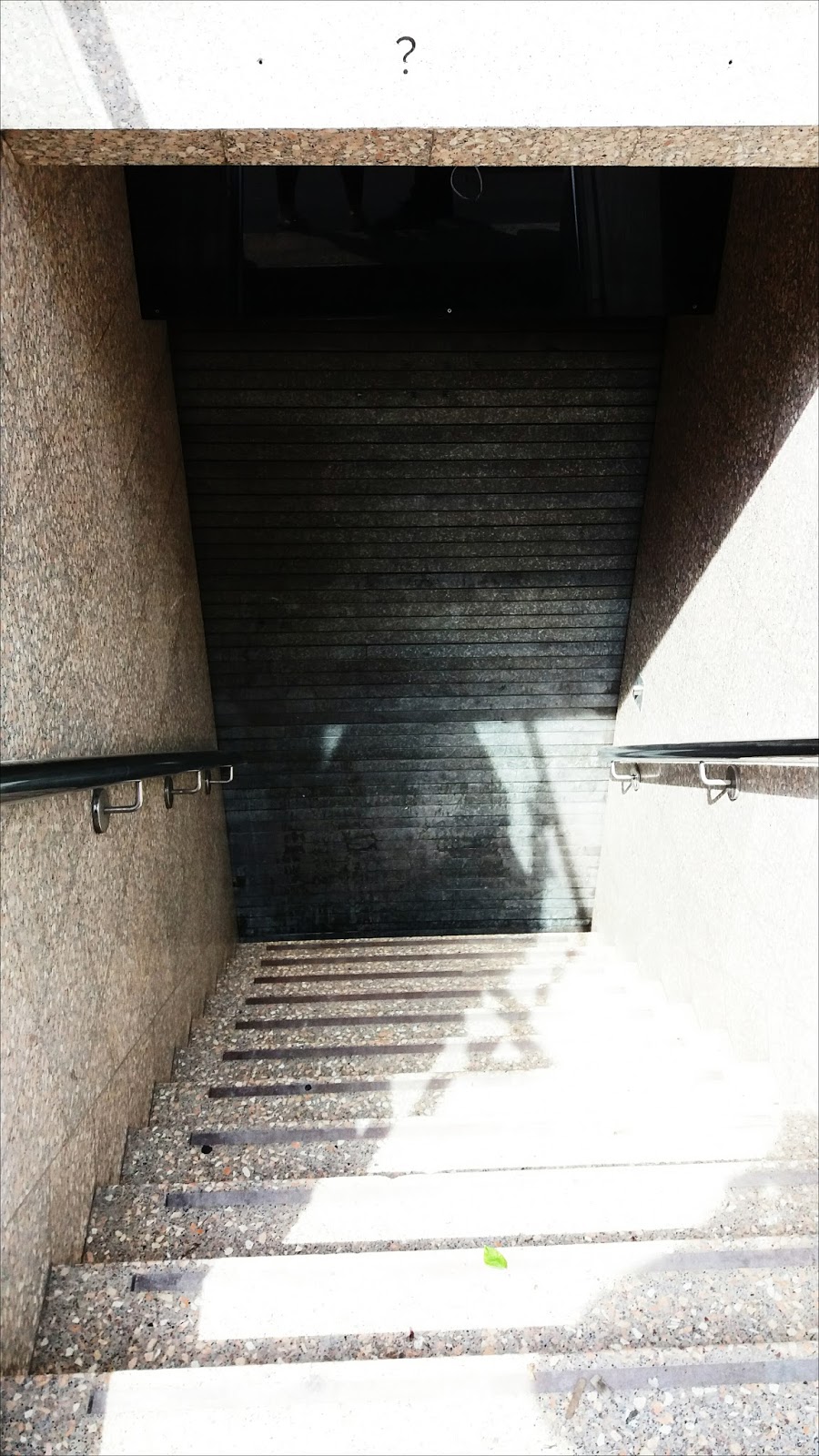 When I first visited Foundation there was an actual queue outside. It was five to eleven and had yet to open, yet there were easily at least ten of us outside in the drizzling rain, desperately waiting for our caffeine fix. Even I hadn’t planned to be there I probably would have hung around to find out what all the fuss was about. As such, I’d recommend getting there early if you want one of the good window seats. Foundation Coffee House is a huge space channelling serious industrial vibes and is a true hipster haunt. A flat white or pot of green tea will cost you £2.50. The flat white invariably arrives with a slightly messed up floret, so it may not be the best place for Instagramming your coffee, but the interior makes up for that aplenty.

Whoever did the interior design for the place likes hexagons even more than I do, and the space has a cool and crisp feeling.  There’s unvarnished wooden tables, concrete flooring interspersed with white hexagonal tiles, bare lightbulbs and mismatched barstools. It’s achingly hipsterish, but not in the way that in some coffee shops you can find yourself overwhelmed by the extensive choice of “artisan” coffees and overly-complicated menus where the staff judge your silent floundering to make a decision, ultimately leaving you with a hideously expensive coffee that you don’t even like.

Despite the hipster element (we’re talking lots of plaid, single earrings on the guys, ripped jeans and artfully tousled hair), it’s also popular with older customers, with groups of older women arriving periodically for coffee and cake (lots of gluten free and vegan options). Lunch is sandwiches and salads, think ham, cheddar and apple chutney on any bread you can think of, or salmon, black rice, quinoa and ginger salad; there’s something for most tastes here. Breakfast is your basic pastries and baked goods; crumpets, pain au chocolat and croissants, scones, tea cakes and a bit of porridge if you’re really hungry, but since it’s only open at 11 it’s not surprising that the menu is a bit limited. The venue is also licensed, serving alcohol throughout the day, alongside protein shakes and smoothies.

We also need to talk about what is one of the most Instagrammable loos I’ve ever seen; look at those tiles! I also love the sink and the tile with the mistake on it made me simultaneously laugh and despair. There’s also what is quite possibly stairs to another dimension next door, judging by the slightly sinister question mark. 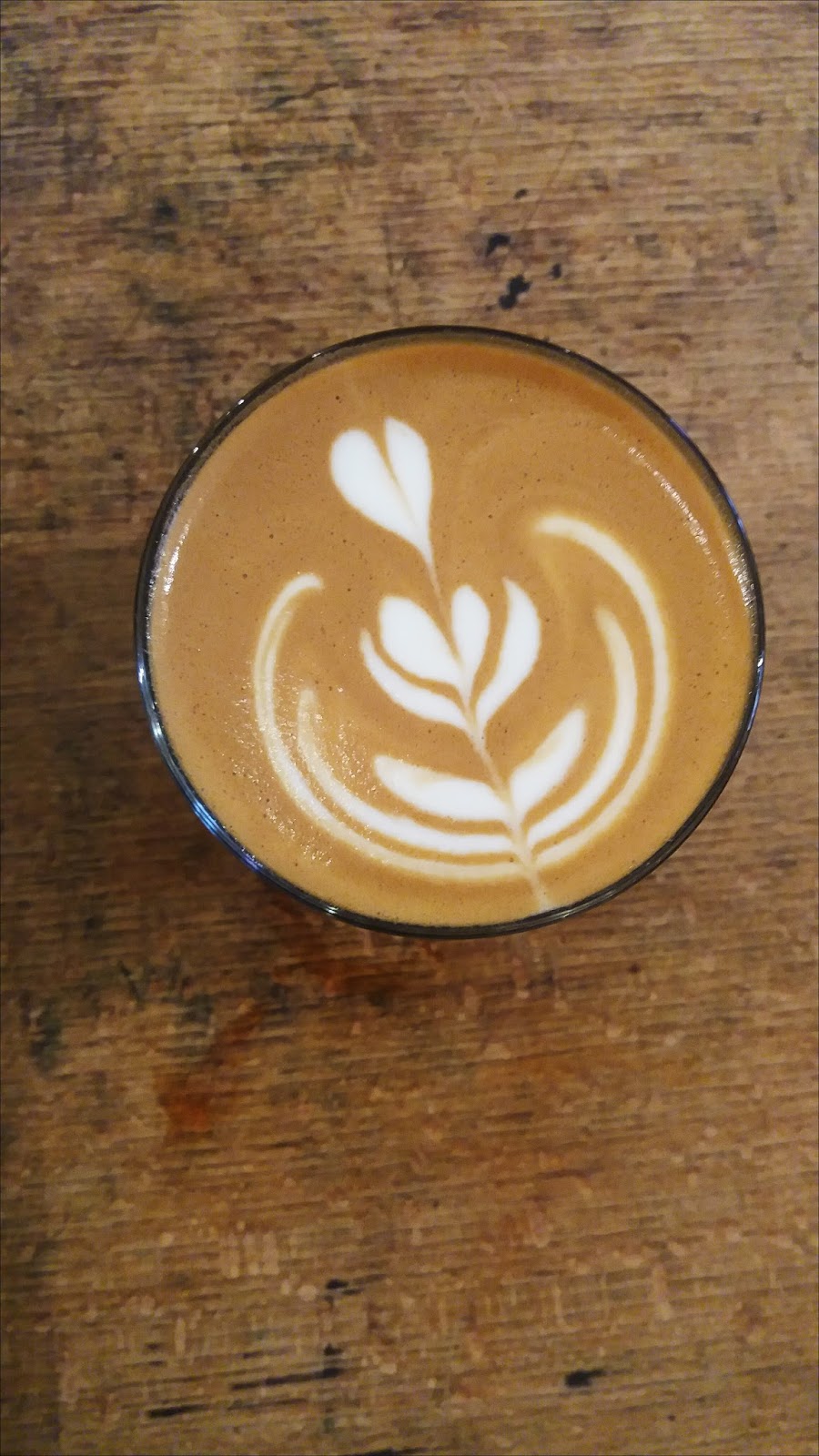 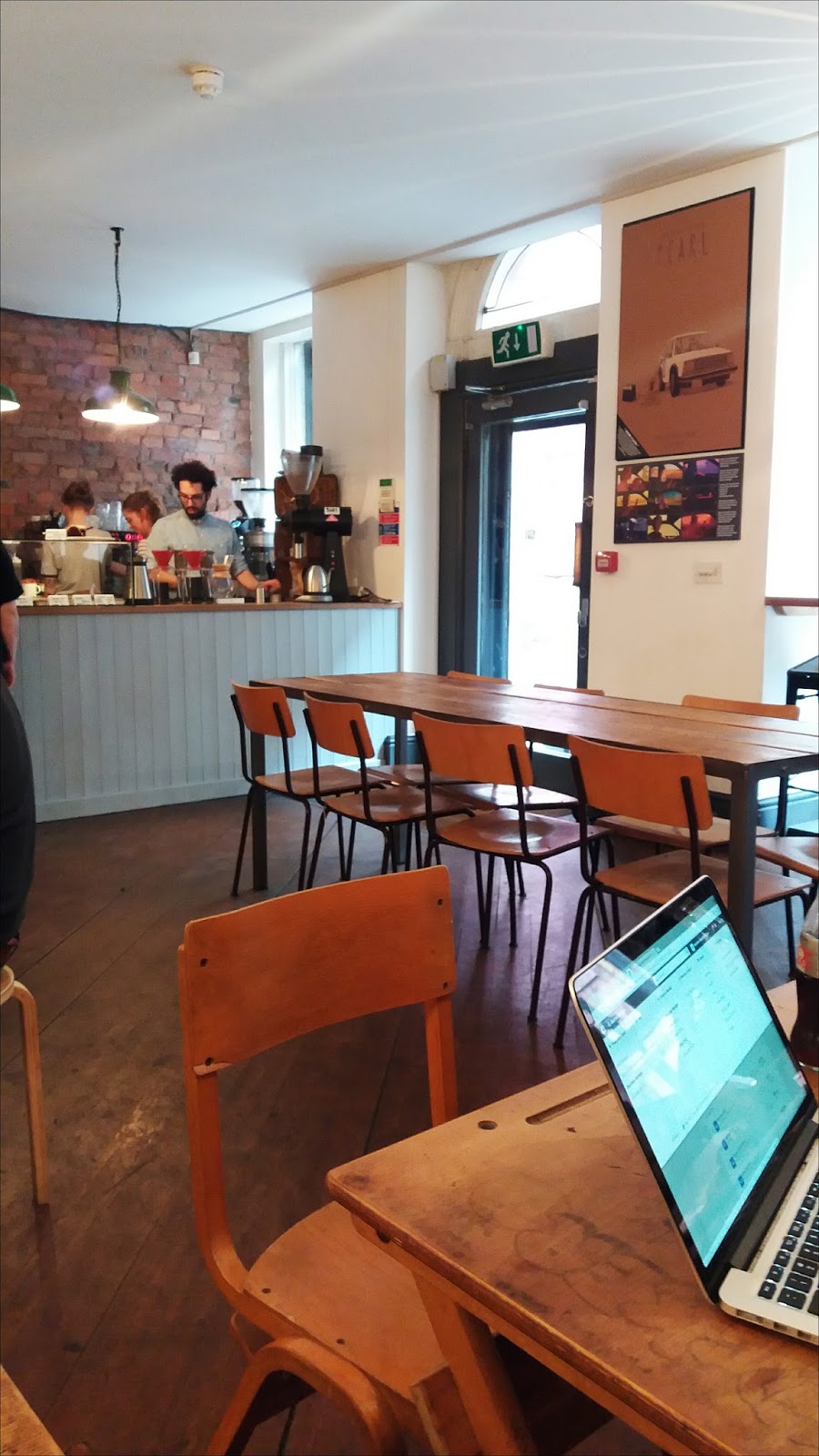 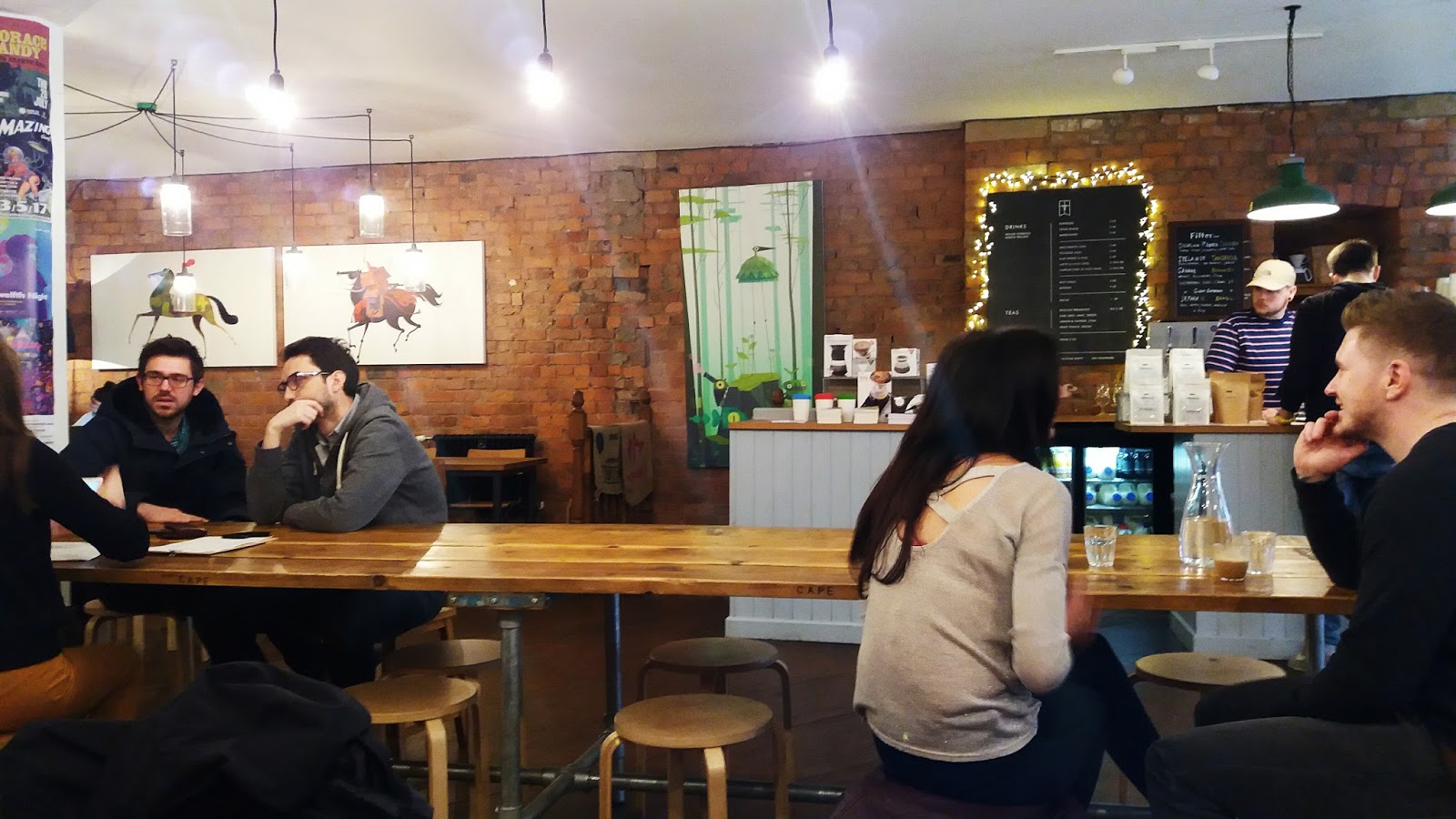 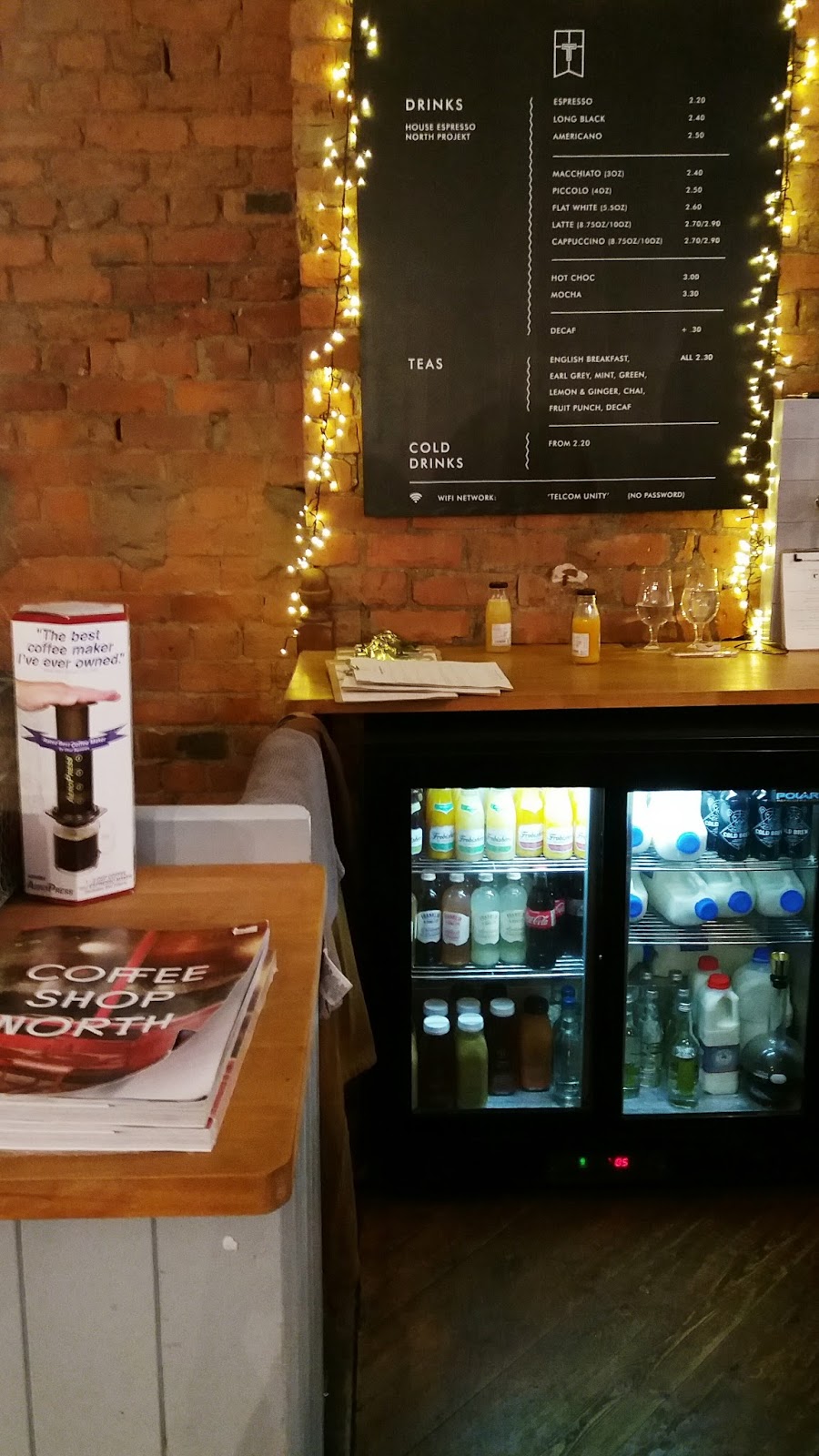 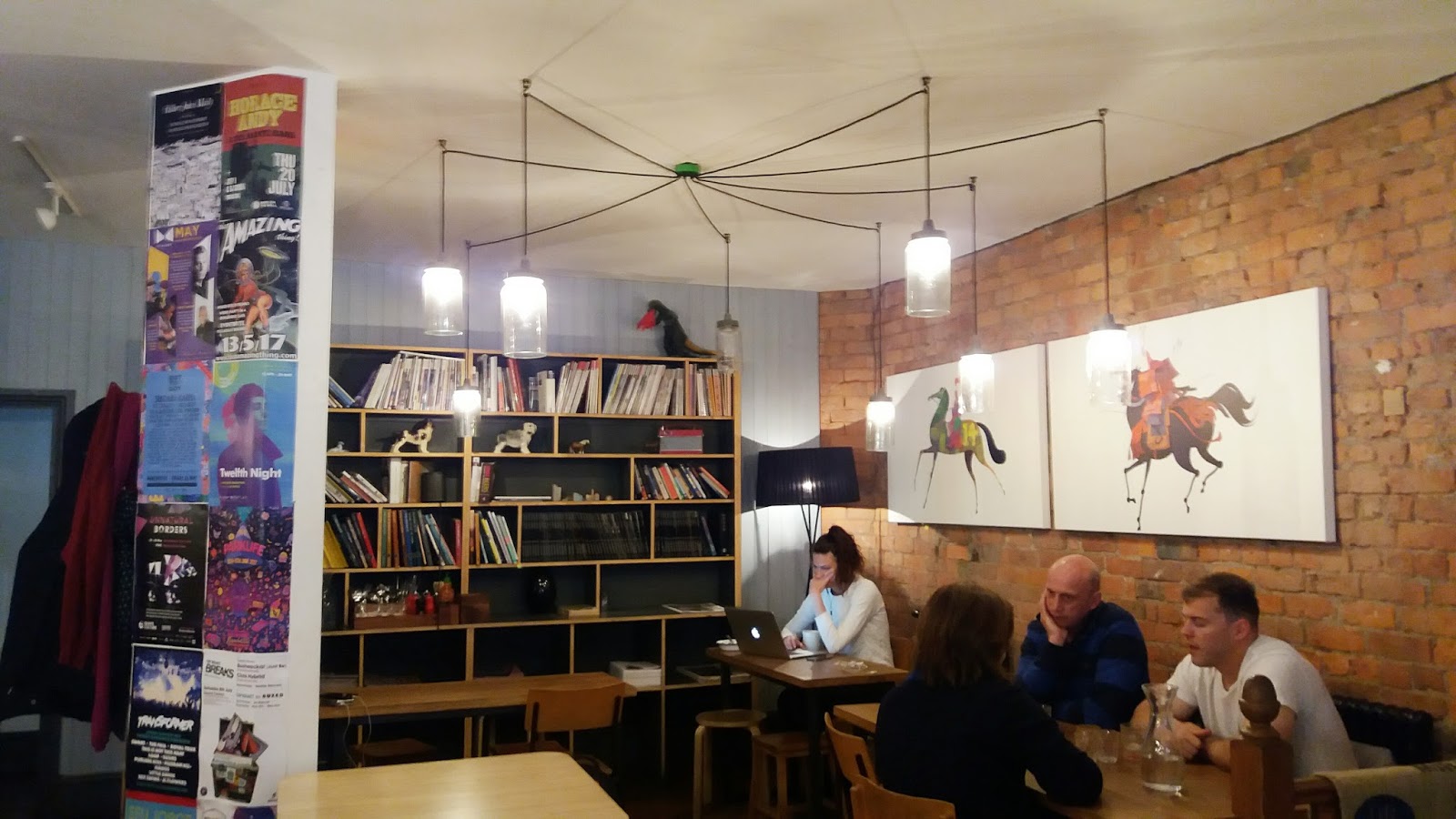 Takk is an Icelandic-inspired coffee house at the Piccadilly end of town, outside of what I would consider the proper Norther Quarter. It’s in the middle size-wise and has an industrial vibe again, but where Foundation Coffee House is cool and calm, Takk has a warm and friendly atmosphere. Where Foundation is concrete, tiles and cool tones, Takk is old, worn wood, warm yellow lighting, a sage green bar and red brick walls; it’s hipster, but of a friendlier sort. It’s furnished with what seems to be recycled wood, including old school desks for tables and church pews for seats, but smoothed and sanded down so that they’re surprisingly comfortable. The art on the walls is angular and cartoon-like; think a samurai emblazoned with a Nike logo, or a strange forest scene with spindly creatures spewing pink smoke, and a bird on impossibly long legs that looks like it’s wearing a leafy tutu; it gives me Totoro vibes but with a very different art style. There’s a cute corner filled with books that I really want to try and bag a seat in but it’s always full. A flat white will cost you a pretty standard £2.60, with a perfect floret and steaming hot.

Were there not someone right by the door the busy environment would be slightly overwhelming at first, as it’s invariably bustling with people. The staff are extremely friendly, showing you to a table as soon as you enter and telling you to come up to the bar when you’re ready to order, a fact I seriously appreciate because I hate the anxiety of eating or drinking somewhere new. Do I wait at the table? Do I go up and order? Wait, there’s another till over there, is that where I go? A simple “just pop to the till when you’re ready” eliminates so much anxiety and stress. The weekend brunch menu is served until 4pm and features wonders like brioche french toast with honey and vanilla mascarpone, pistachios and blueberry compote and maple syrup. droooool. For the meatier minded, they do ham hock crumpets and there are plenty of veggie and vegan options.

Generally, I prefer to work in a little nook or in a window, somewhere where I feel I can look out but people don’t really look at me. In Takk I can sit in full view of the bar, surrounded by people, and feel comfortable enough to take photos and whip out my laptop and write and write. There’s no denying that it’s noisy, with a general hubbub of chatter, milk steaming and chilled out beats playing over the speakers, but it’s a nice kind of noise. It’s softened by the brick walls and wood and washes over you pleasantly as you work or chill. There are events on Takk’s Tumblr page, including music performances and a chat about a recent staff visit to El Salvador to meet the growers of the coffee they sell; they’re clearly serious about the coffee they produce, but not in a snobby, elitist way. It’s chilled out and friendly, and it might be my favourite on this list.

I hope that you enjoyed this post and hopefully found somewhere you might pop into if you’re ever in town. I’m thinking of turning this into a little series, perhaps looking at some of my favourite brunches, lunches and other things around Manchester. Let me know if you think of any other categories you’d like to read about!