You know how over the years you just sort of accumulate possessions? I’m definitely guilty of that, but after my most recent move I realised there were a few things that were not like the others. I have all the usual lamps, bedding, sheets and random rugs to brighten up dull rented flats, but there are also a few…odd items. Brace yourself, for disturbing homeware choices are ahead.

I figured we‘d start with the not-that-strange and work our way up to the nightmare-inducing, so the first things on the list are this hot water bottle and cushion combo. My ex said that they were slightly creepy and that the cats look like they’ve been squashed. I like them though, and the hot water bottle is essential for those time of the month cramps. I think I pinched these from my Mother and they’re probably older than I am. They‘re generally somewhere near my bed for lumbar and emotional support when I‘m having one of those “I refuse to leave my duvet” days. 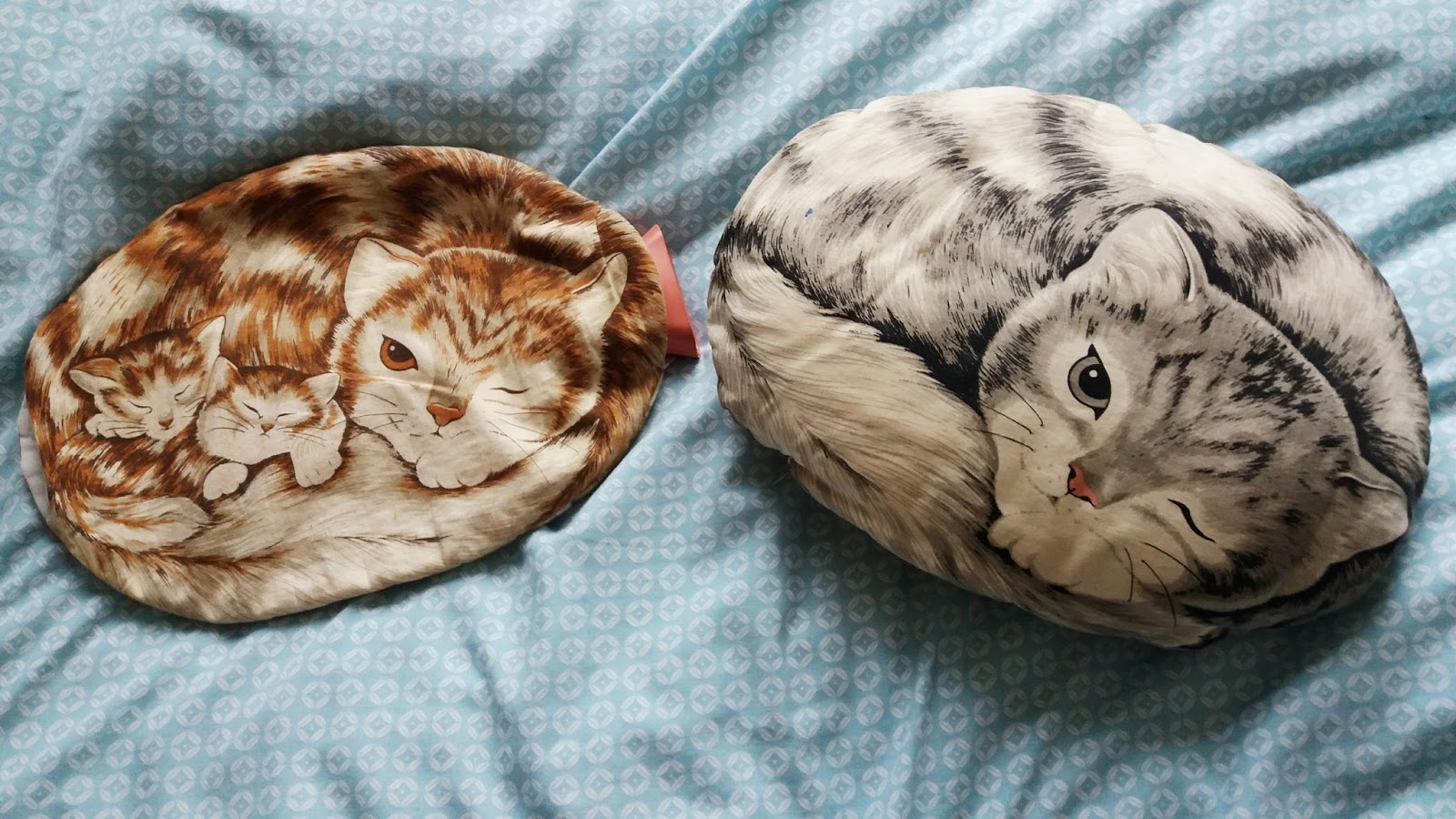 This little salamander friend is filled with sand and his name is Gerry. I don’t remember naming him that, but I suspect it was originally Gerald. This has been called, “completely unnecessary” and “just an ugly lizard ornament” and while both of these points are completely valid, it was also my Dad’s. I have very few things of my Dad’s who died when I was five, and this is pretty much all I have of him. It’s extremely nineties in design and looks like Elton John just threw up colours on it, but I love it. I use it as a paperweight most of the time, as the sand means it’s heavier than it looks. 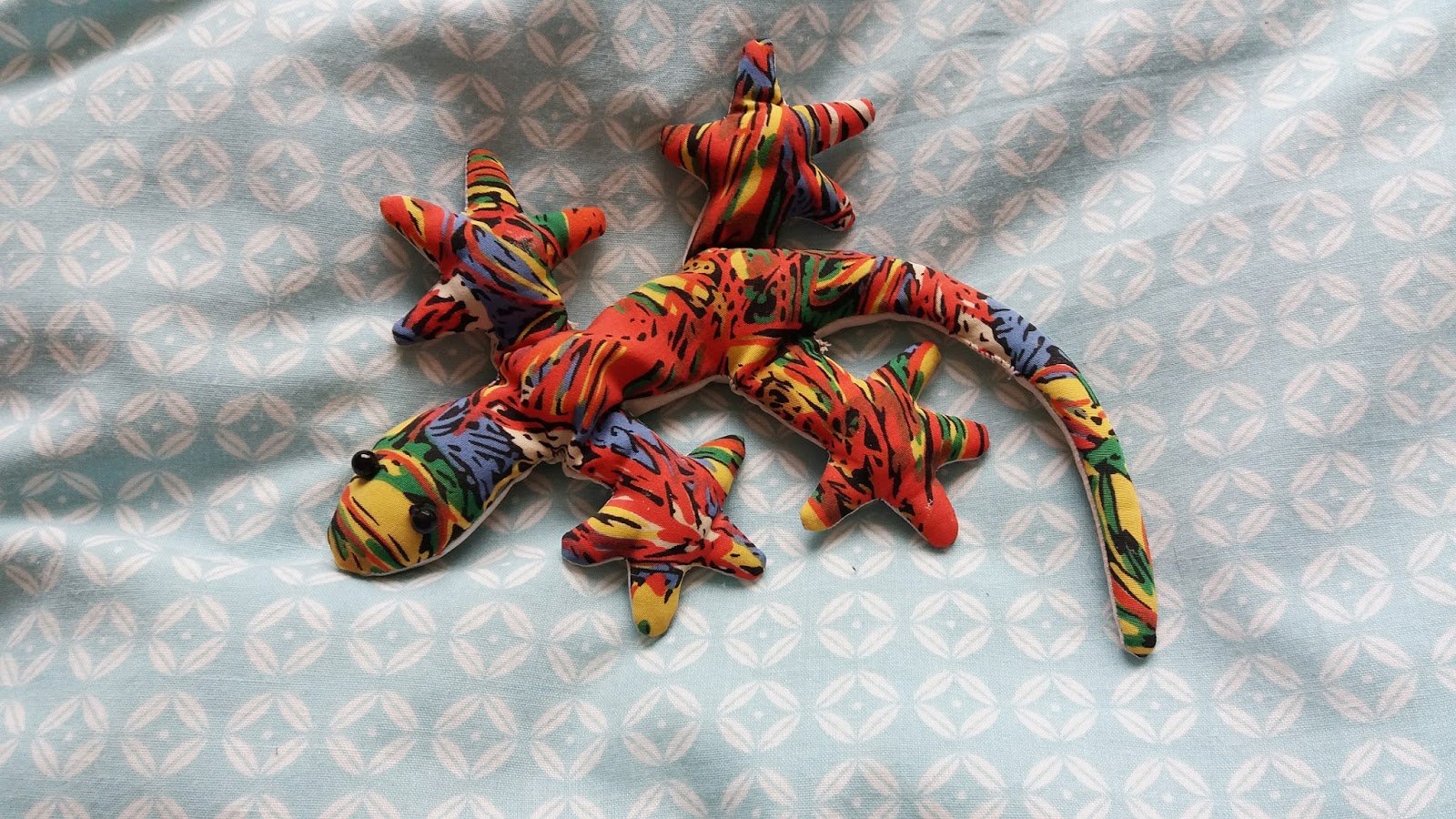 I seriously love this dinosaur planter. My brother bought this and a matching velociraptor one for me for Christmas last year, spray painted gold and copper. I only have the copper T-Rex out at the moment as I somehow managed to kill the plant in the gold velociraptor, and if I’m honest the T-Rex plant isn’t looking great. I think they’re awesome though, and the story behind them is I’m the T-Rex with my “stumpy arms” (I maintain that my brother stole an inch of my arms somehow) that can’t reach anything, and my brother does a top notch velociraptor impression. I really need to get some new plants for these and actually try and keep them alive this time. 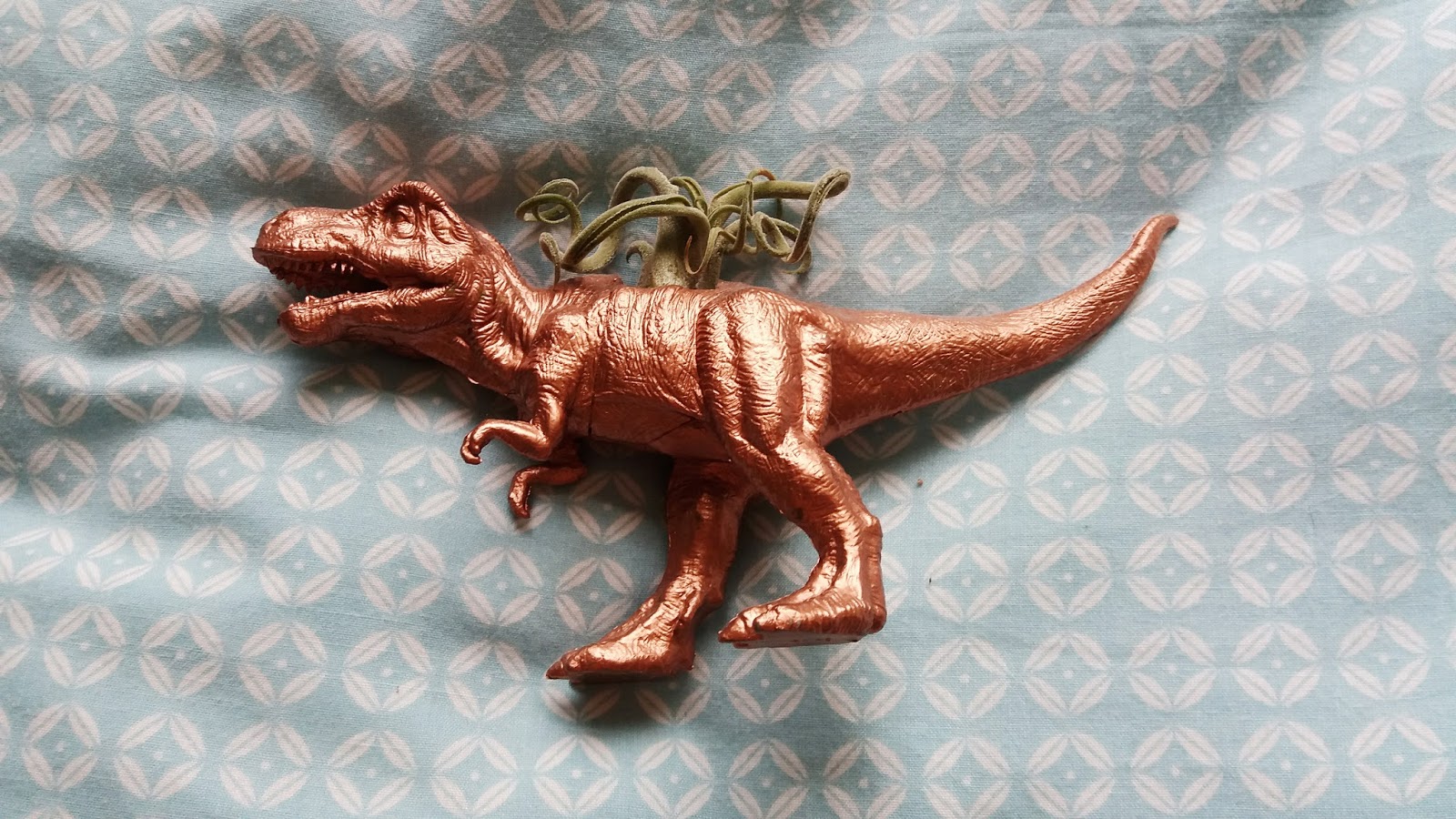 Okay, we’re getting a bit weirder now. This is Mack, the mackerel. He’s a metre long cushion in the shape of a mackerel that was an impulse buy in IKEA. I have no idea why IKEA would be selling mackerel cushions but I took full advantage of the opportunity. It’s weird, I grant you, but I kind of love it. It is particularly useful as a weapon in pillow fights as people tend forget its increased range; I use it like a rapier with nice quick jabs to the chest to claim victory. For the record I really don’t have pillow fights that often but at least I’m prepared. It currently lives on top of my headboard where it stares down visitors to my room and occasionally falls on my face in the night in a terrifying manner. When I had my own flat this was invariably on the sofa as it’s a pretty nice cushion for the lower back when you have a crappy couch that came with the flat. 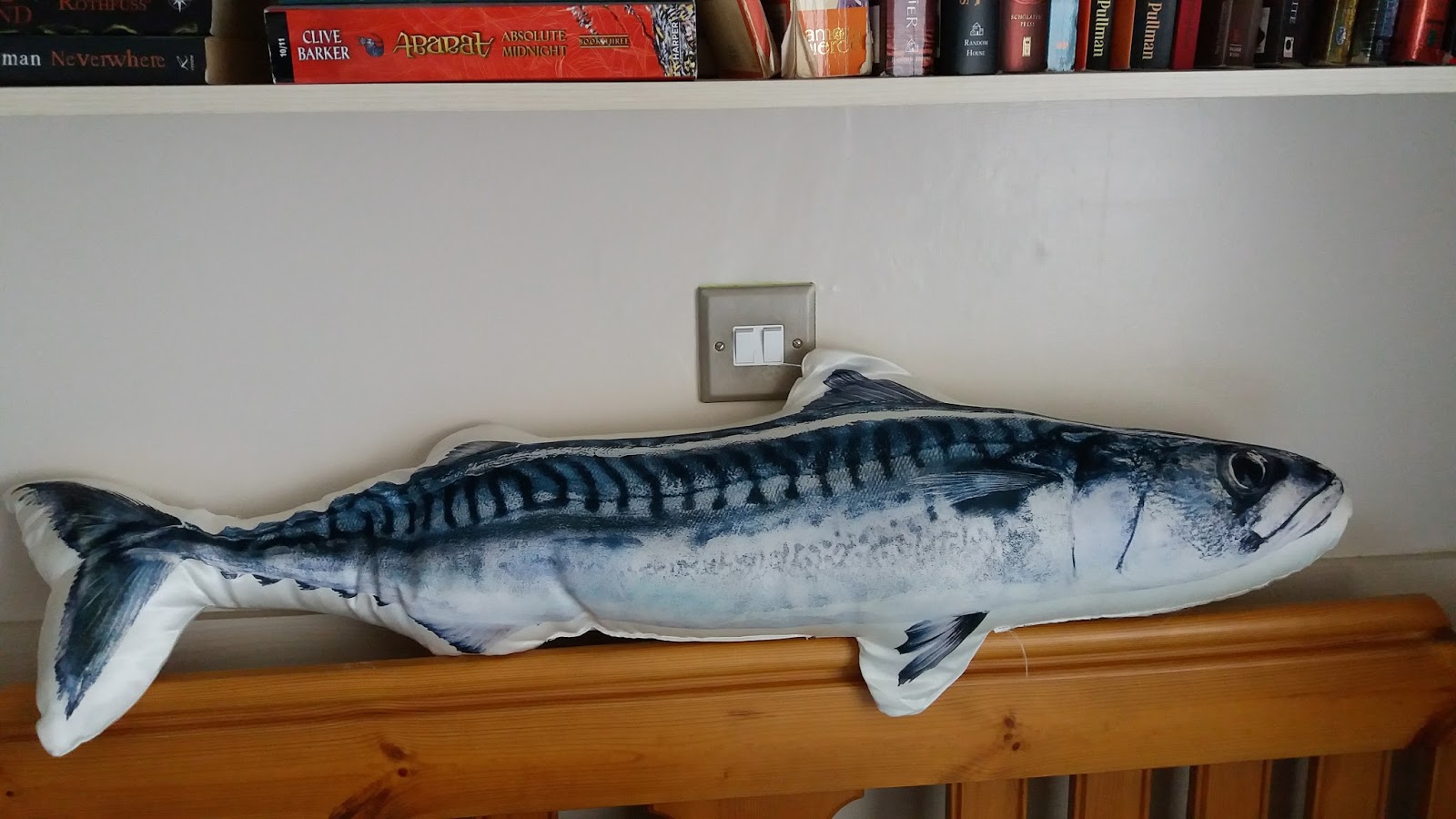 Everyone, meet Edgar Allan Crow (of course that’s what I named it). In early November a few years ago I received an excited phone call from my Mother, telling me that poorly made Halloween crows with light up eyes were on sale in ASDA for a fiver. I immediately made her buy me one, because that sounded awesome. The reason she rang me was because we have a running joke about my being the goddess of war and death with crows for minions; this started after it was observed that in basically every photo I sent my Mum of my new flat (and I’ve had a lot of flats) there would be a crow outside the window on the grass or something. There also used to be some crows that lived outside my window as a child, which left when I went to uni. I’m now back at my Mother’s and there actually are crows that live just across from my window again, which is a very bizarre coincidence. So yeah, I’m Morrigan, and that’s reflected with poorly made Halloween ornaments, deal with it. 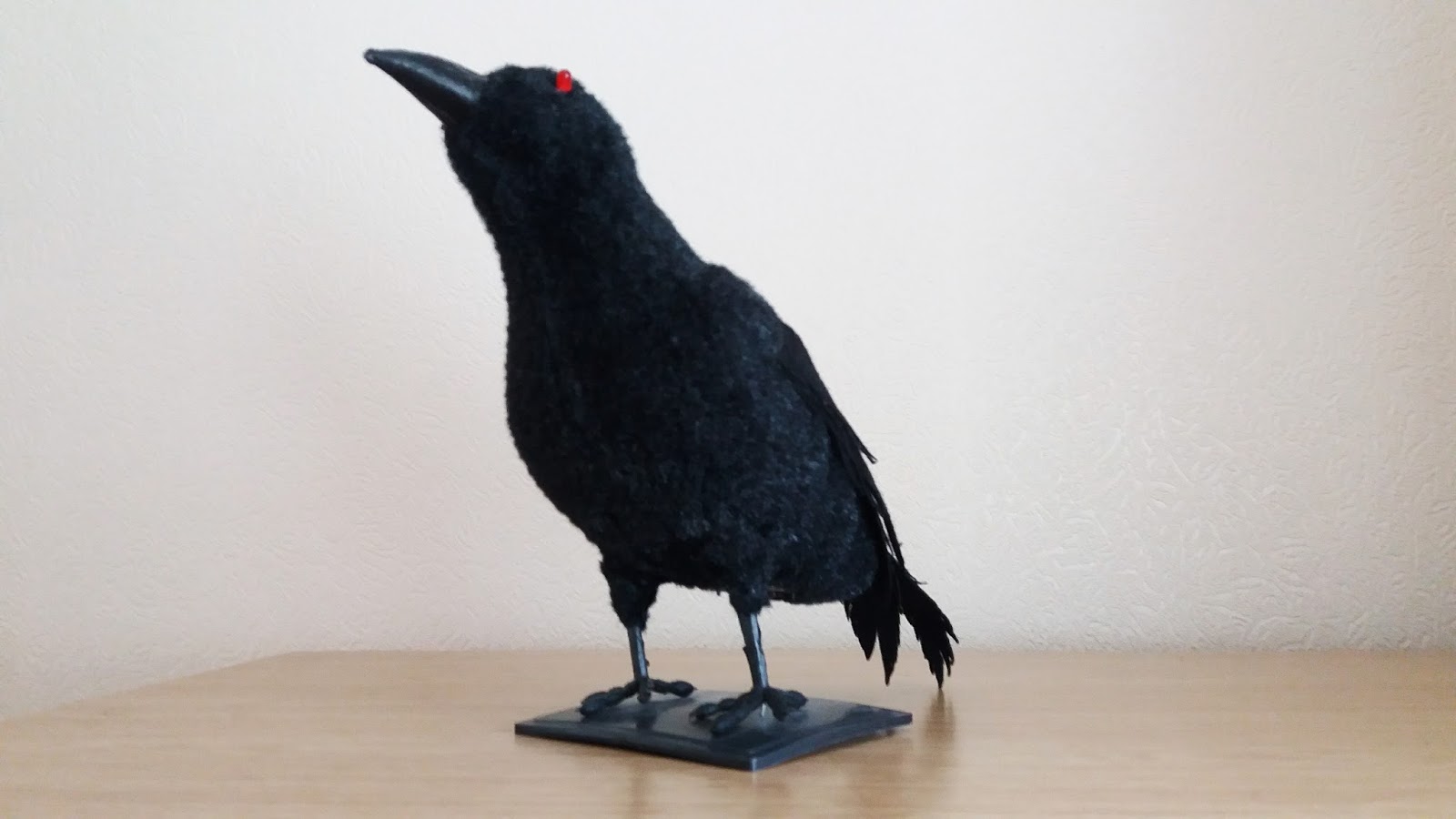 Now for the promised nightmare-inducing home ornament. I actually tend to leave this at my Mother’s house because it’s terrifying ever as the creator. I am not particularly artistic, and in Year 9, when I was about 13, we were tasked in Art class to create some kind of “African” themed pottery. Let’s not get into the unfortunate nuances of that assignment here, but instead turn to what I decided to do. In true Top Gear style, I was ambitious but rubbish, and while the rest of my class made cups with Maasai inspired patterns, I decided to make a teapot in the shape of an elephant’s head. I ended up blending the African and Indian elephants by using the traditional Hindu elephant festival garb as a way of incorporating a handle for the teapot lid. Again, not the most sensitive decision by me, and certainly not the worst unintentionally offensive thing I’ve done, but even sweeping aside all the horrifically offensive implications there’s no denying that the end result is terrifying. This god damn elephant got me an A, the only A I ever received in Art. The main source of the fear the teapot inspires in observers is the result of the eyes; they’re too far apart, no matter where you are in the room one is watching you. The sickening grin hints at unwholesome thoughts, and lumpy clay and patchy glazing is reminiscent of a Goosebumps style monster. I wouldn’t have given me an A, I would have given me a D and the teapot an exorcism. My Mother keeps it at eye height in the living room and leaves unwelcome visitors in the room with it so that it can psyche them out while she figures out how best to get rid of them. Once you’ve noticed it, you can’t stop looking at it, meaning that these visits do seem to end up shorter than they would have been otherwise. At least it’s useful to someone. 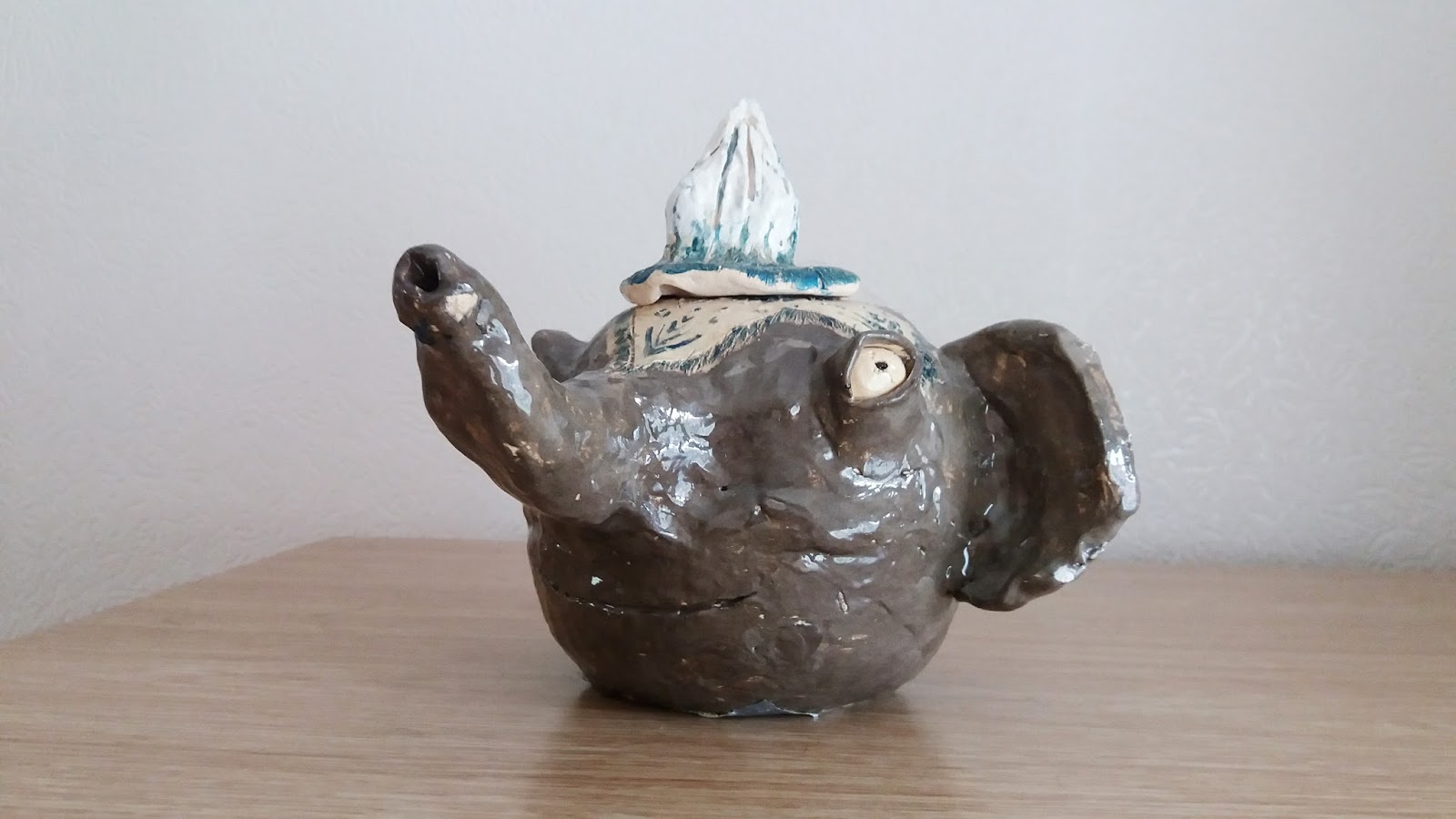