This notebook was part of a gift given to me when I left my old job back in April 2016, and it became a firm favourite of mine. I always end up with one notebook that I use to death and write in constantly, and this one certainly stood the test of time. This notebook was with me through one of the most tumultuous times of my life, and it’s weird looking back through it and seeing how my life changed reflected in its pages. 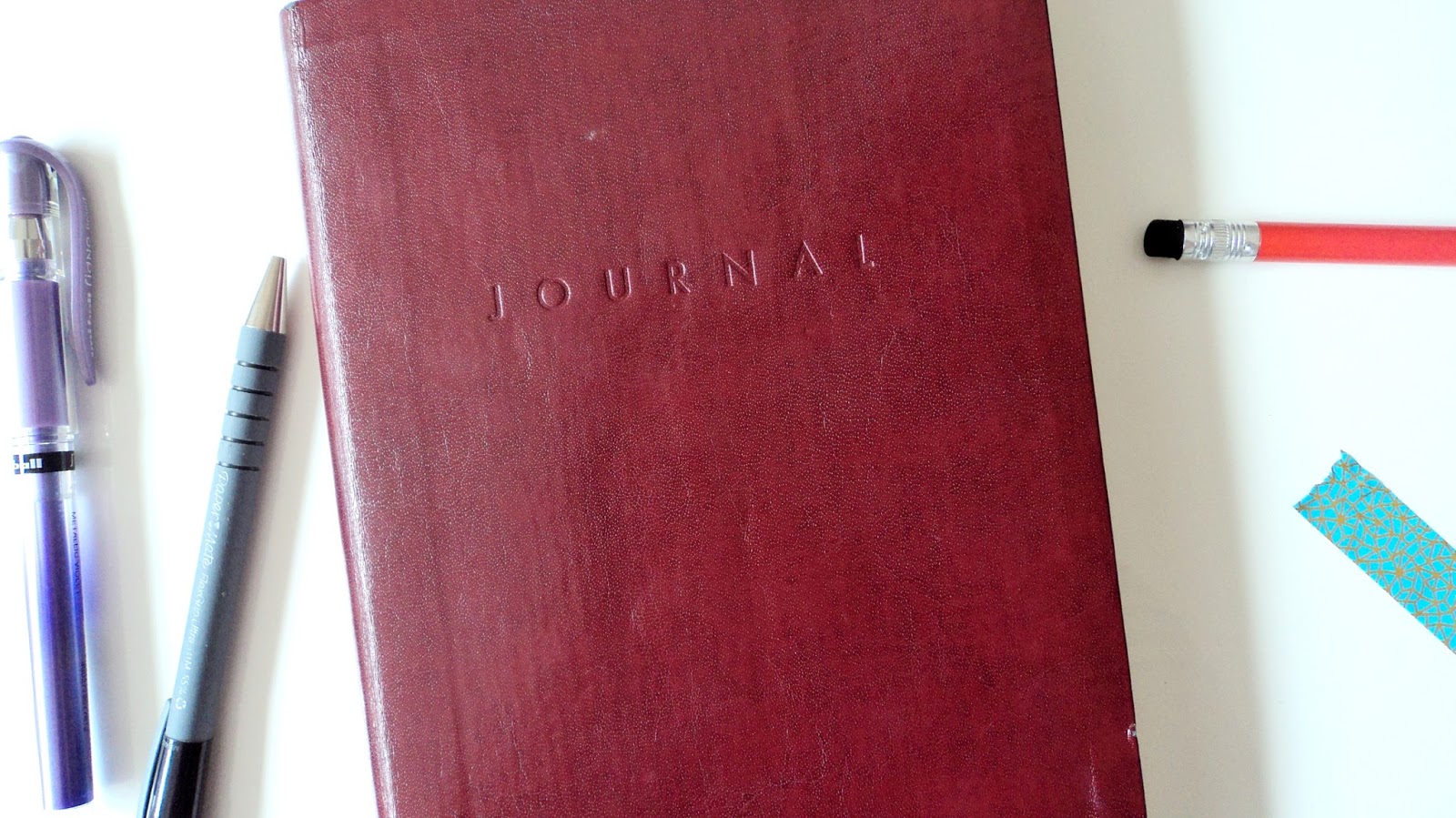 I first started using this book for Chinese. I started taking Mandarin lessons in April 2016 as a reaction to my (now ex) boyfriend who I was living with at the time. He was very much immersed in teaching himself Japanese, which actually ended up being one of the things that drove us apart; it sounds bizarre but it makes sense, I promise. I’ve always been interested in languages so it wasn’t purely just to show him that I could be interesting and improve myself too, but about a month into my lessons we had a very messy breakup and I left Manchester. 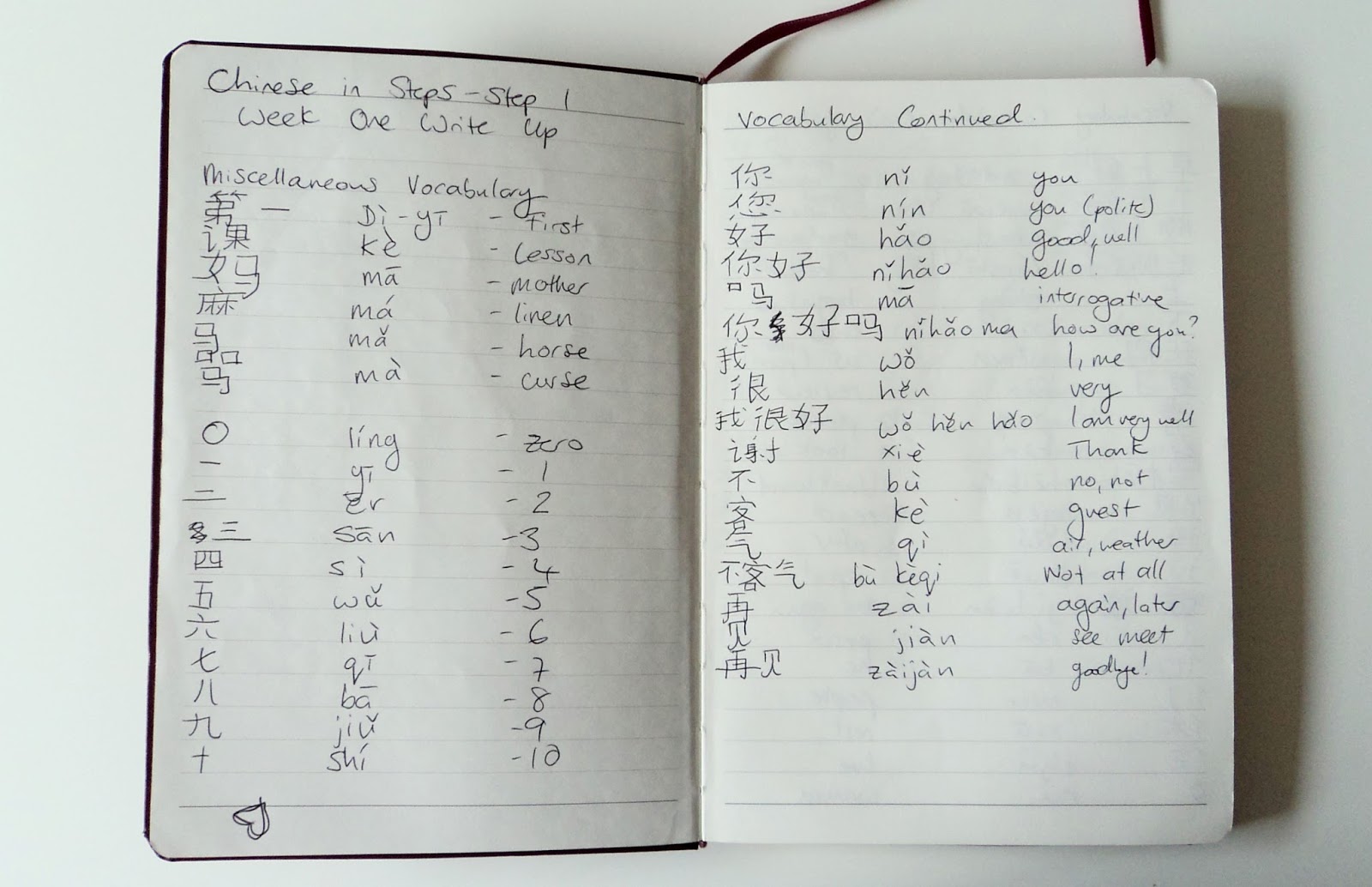 Which is where I was on the 23rd of May. We broke up on the 21st and I moved out of our flat and back to my Mum’s that afternoon. It had been brewing for a while but the whole thing was pretty undignified and an extremely negative experience. You can see from the little pep talk I was giving myself here that I was in a pretty bad place. I was trying to convince myself that it was time to pick myself up and move on, but in reality, I didn’t manage to actually do that until about August. 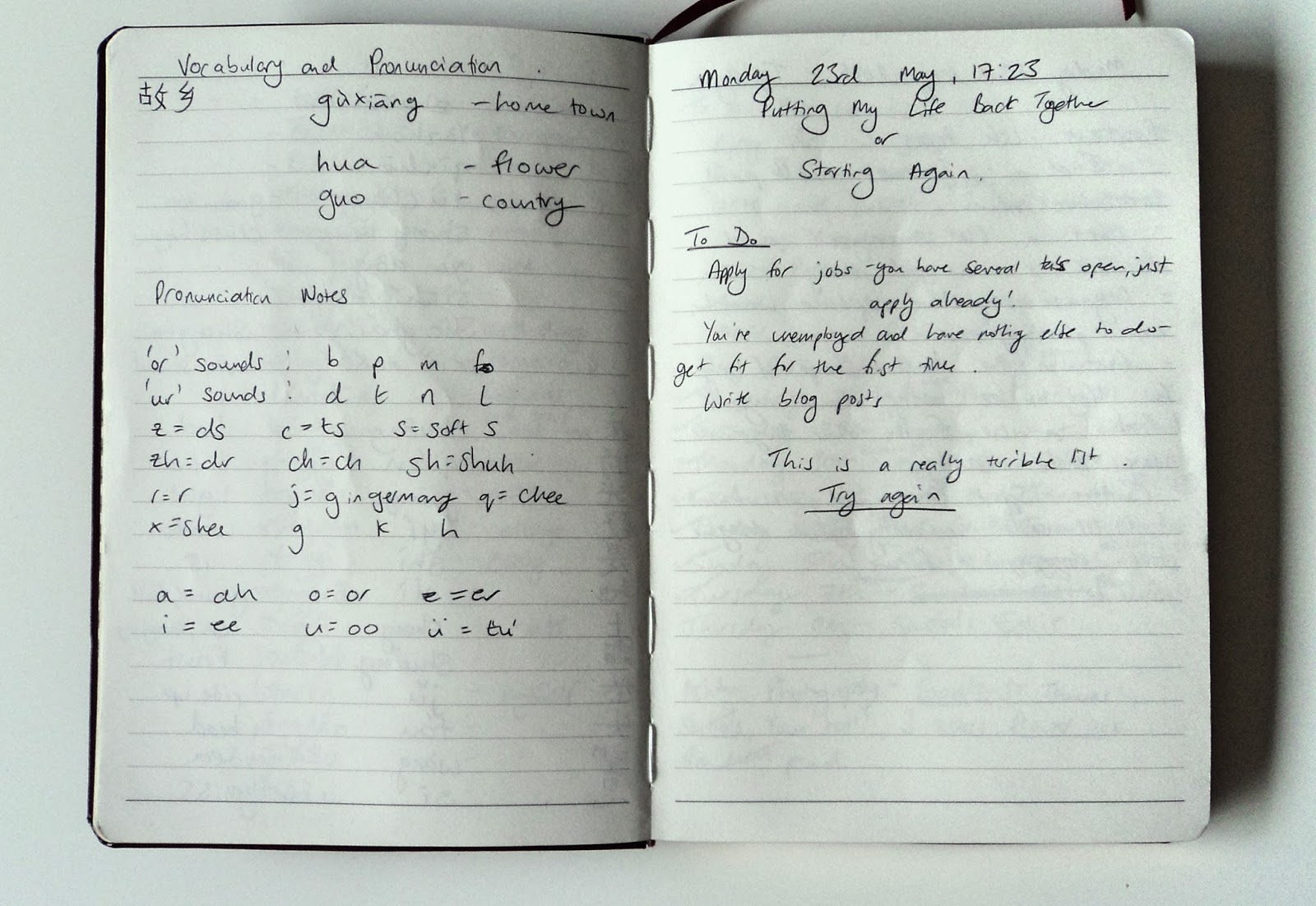 I appear to have written out the carrot cake recipe that I used for my Nan’s birthday cake, so this would have been in early June. This is the recipe that my Nan loves the best; I often don’t make the prettiest cakes but this carrot cake is always hella moist and delicious. I think sultanas really add to it and my Mum loves them, but I know a lot of people have strong feelings about sultanas so you can always leave them out. 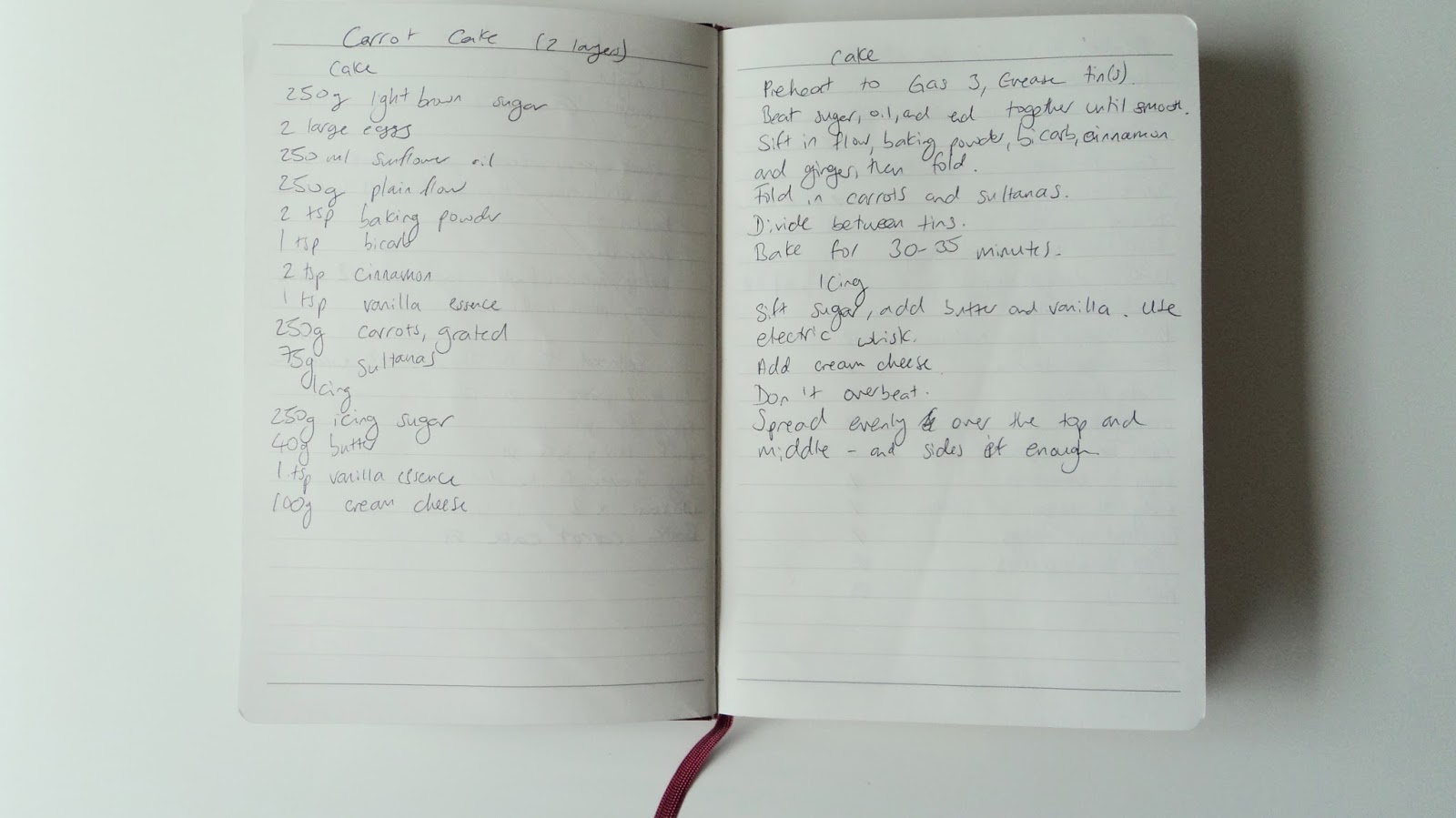 Now in July, you can see how much I was desperately trying to take control of my life. I was still seriously messed up after my break up and to do lists were my control mechanism. I had huge lists of things to do; you can see I still hadn’t even cancelled my broadband contract months after moving out from my own flat, in with my ex and then out again! I had forgotten about it for ages and then put it off for literally months. I can assure you that I did eventually cancel it. I also started really working on this blog properly last Summer, simply as I had nothing else to do. 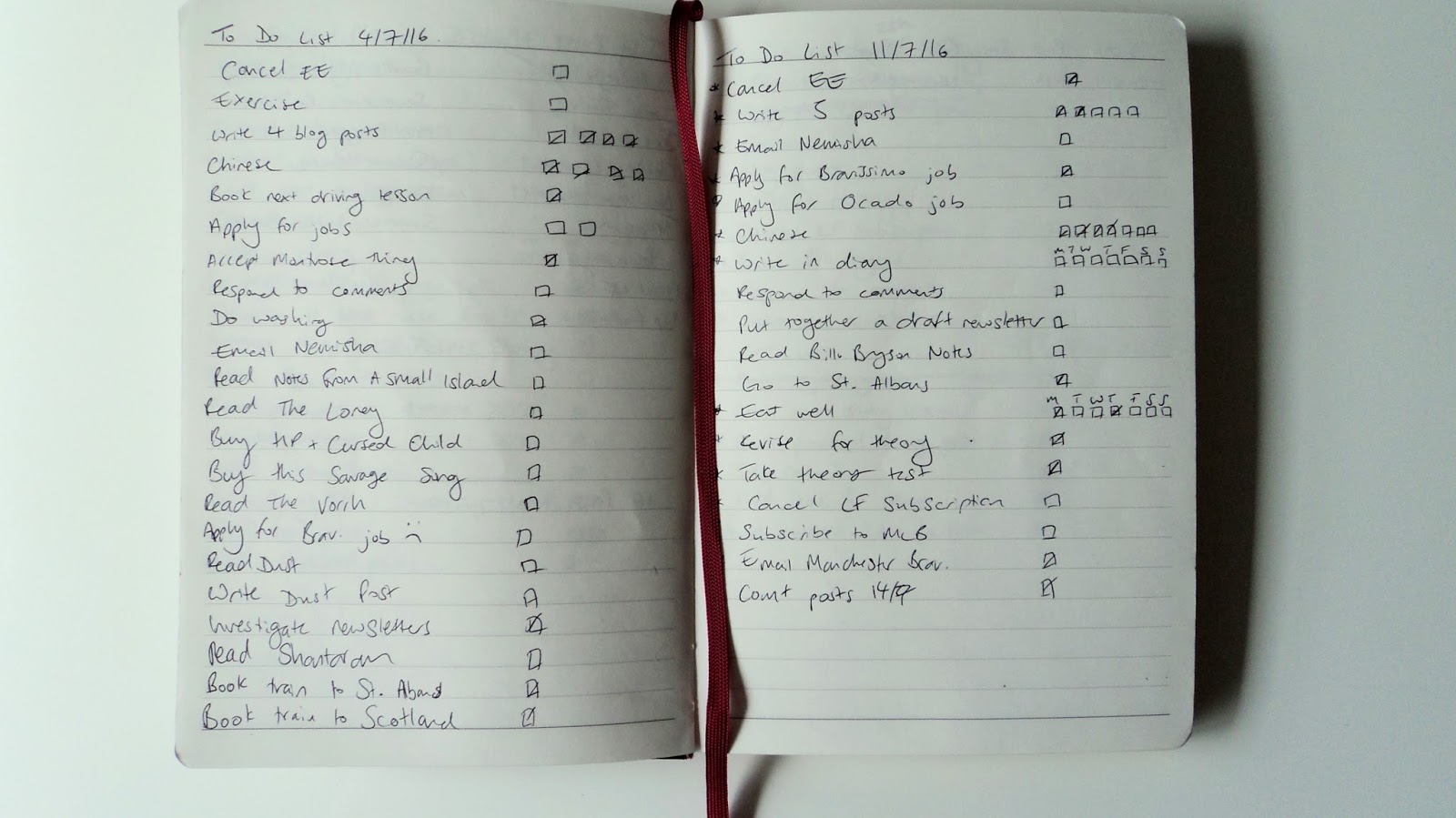 In August I had an interview down in Leamington Spa for which I brushed up on some slightly more advanced Excel skills. I had to pay to get to the interview, pay to stay over the night before, and then had to endure a very sad and very delayed train journey back up North when I didn’t get the job. It was a bad day. 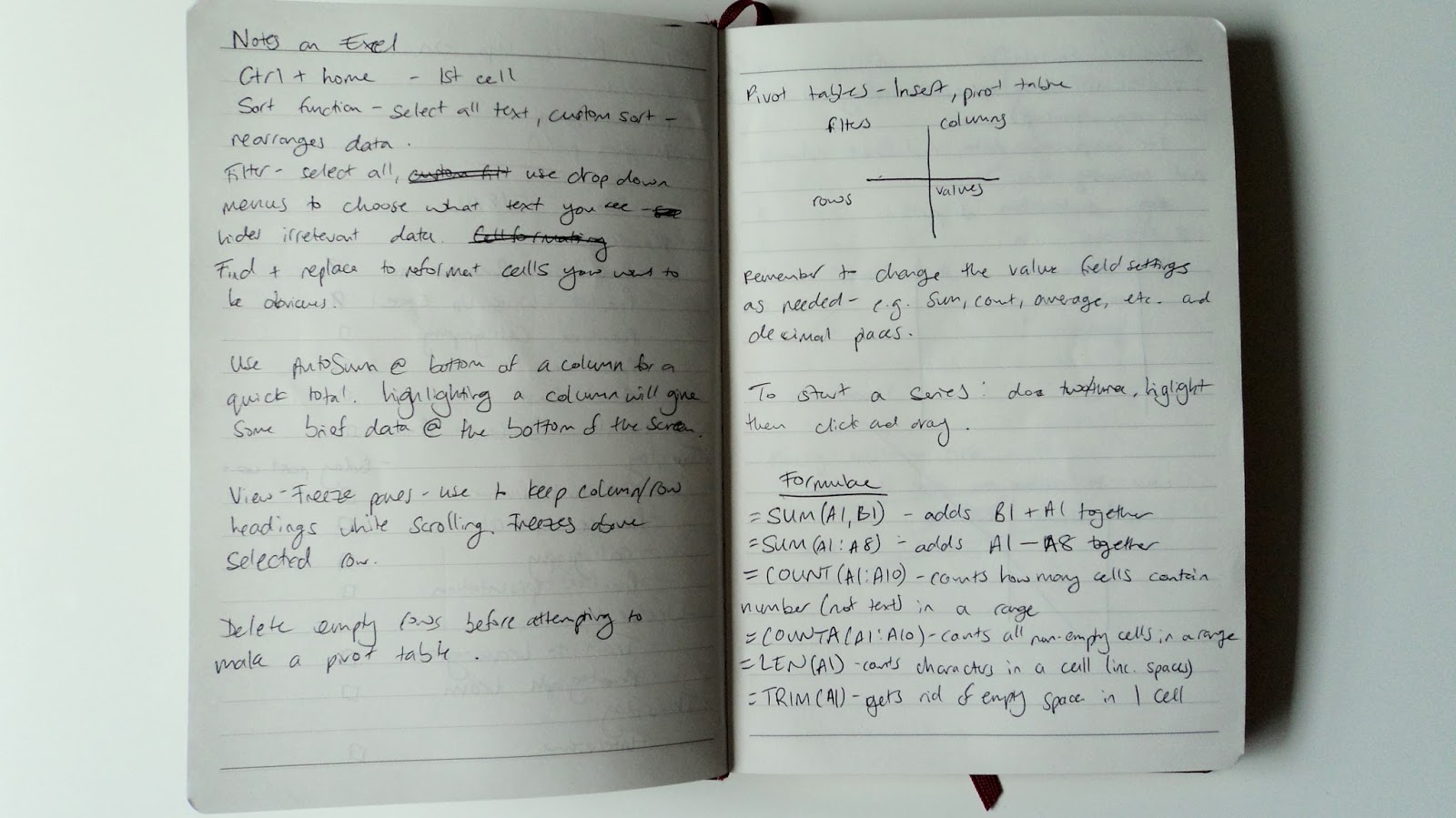 Now jumping ahead to November, I have more lists that reflect a massive change in my life. In September I reconnected with an old friend who is now my boyfriend, through whom I finally found a job and ended up with two weeks to move back to Manchester before I started. It was a mad time in which I actually neglected this blog quite a lot, and ended up writing a post about where I had been. I’ll link that post here, as it talks about the major life changes that happened in a few short weeks. 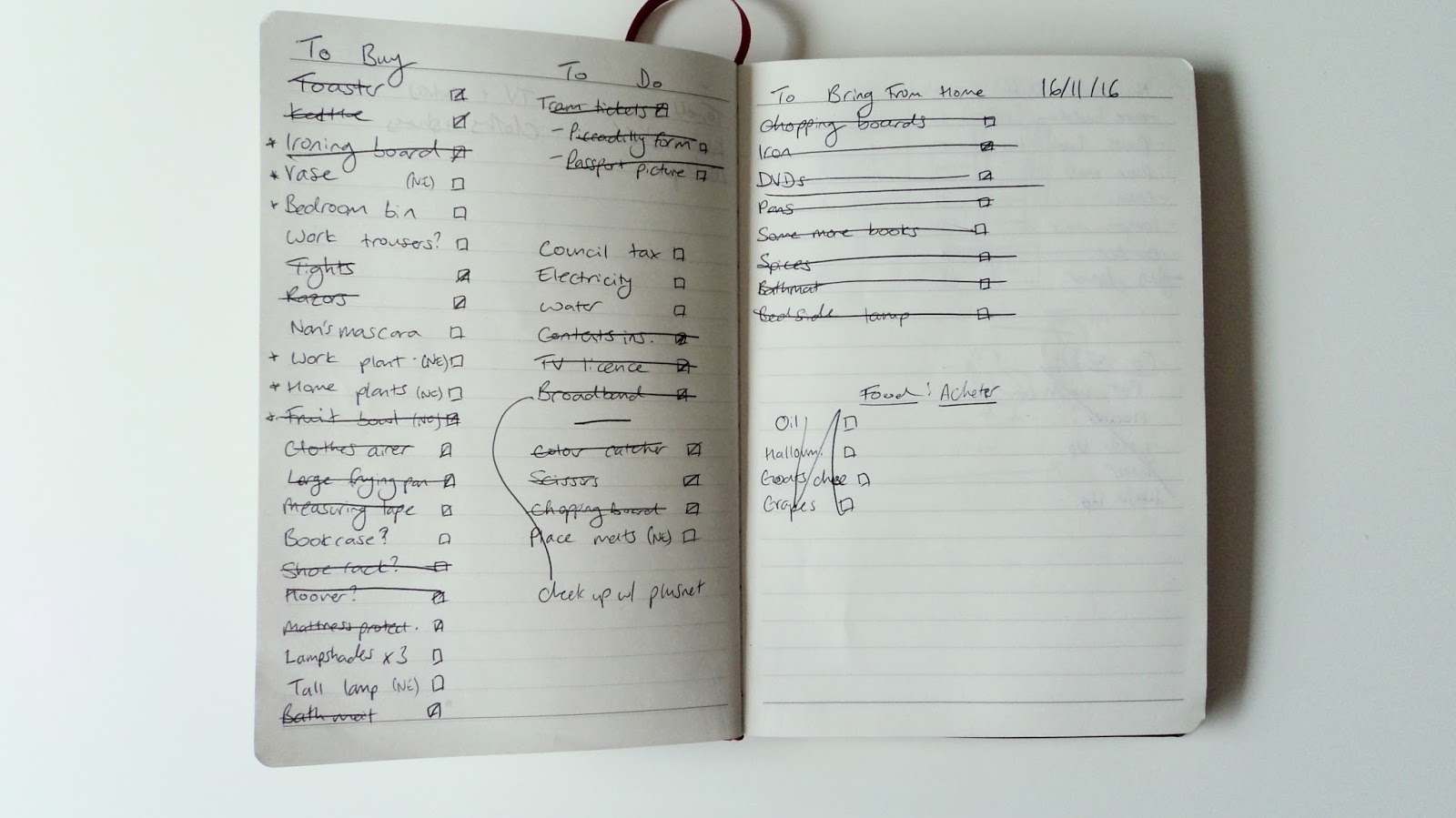 This was a really weird day. There are a few diary-style entries dotted throughout this notebook, most of which I haven’t shared as they’re either hideously self-pitying or too personal. This was written when I met my ex for lunch and to clear the air for the first time since the day we both swapped a few leftover belongings in July. It had ended in us sobbing in the street outside Wagamama Spinningfields; this time was very different. My rose-tinted glasses were finally gone. I was actually kind of bored once the relief that there were no residual feelings wore off. After that lunch, I don’t think I’ve ever been happier to go and see my boyfriend and realise how much better my life is, in large part thanks to him. 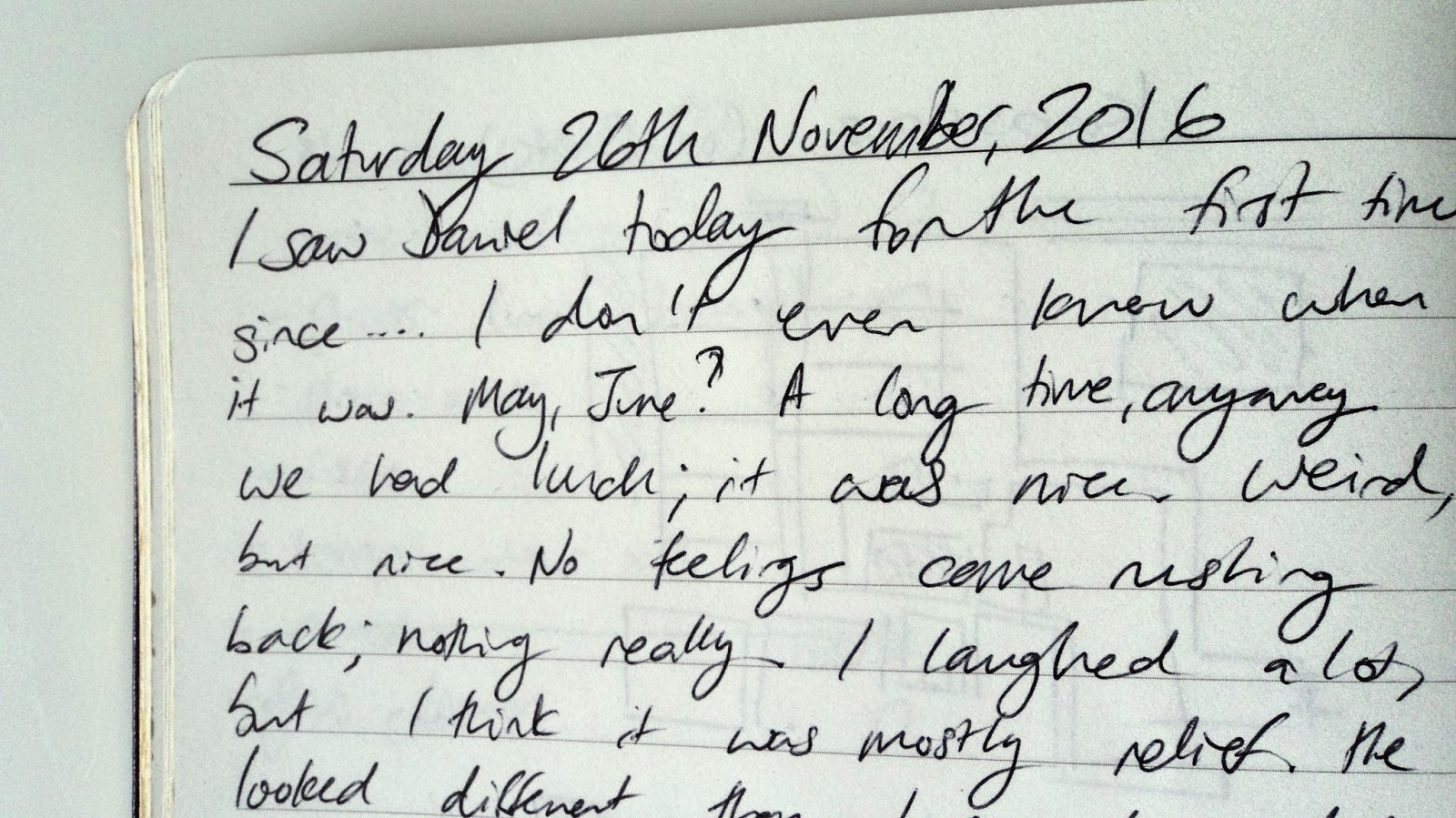 For several months it’s pretty much meal planning and more to do lists, but you can see how I was becoming (or attempting) to be more organised, splitting up my lists into categories because I get confused and overwhelmed by long lists. FYI, there are still things on this list that I haven’t done. 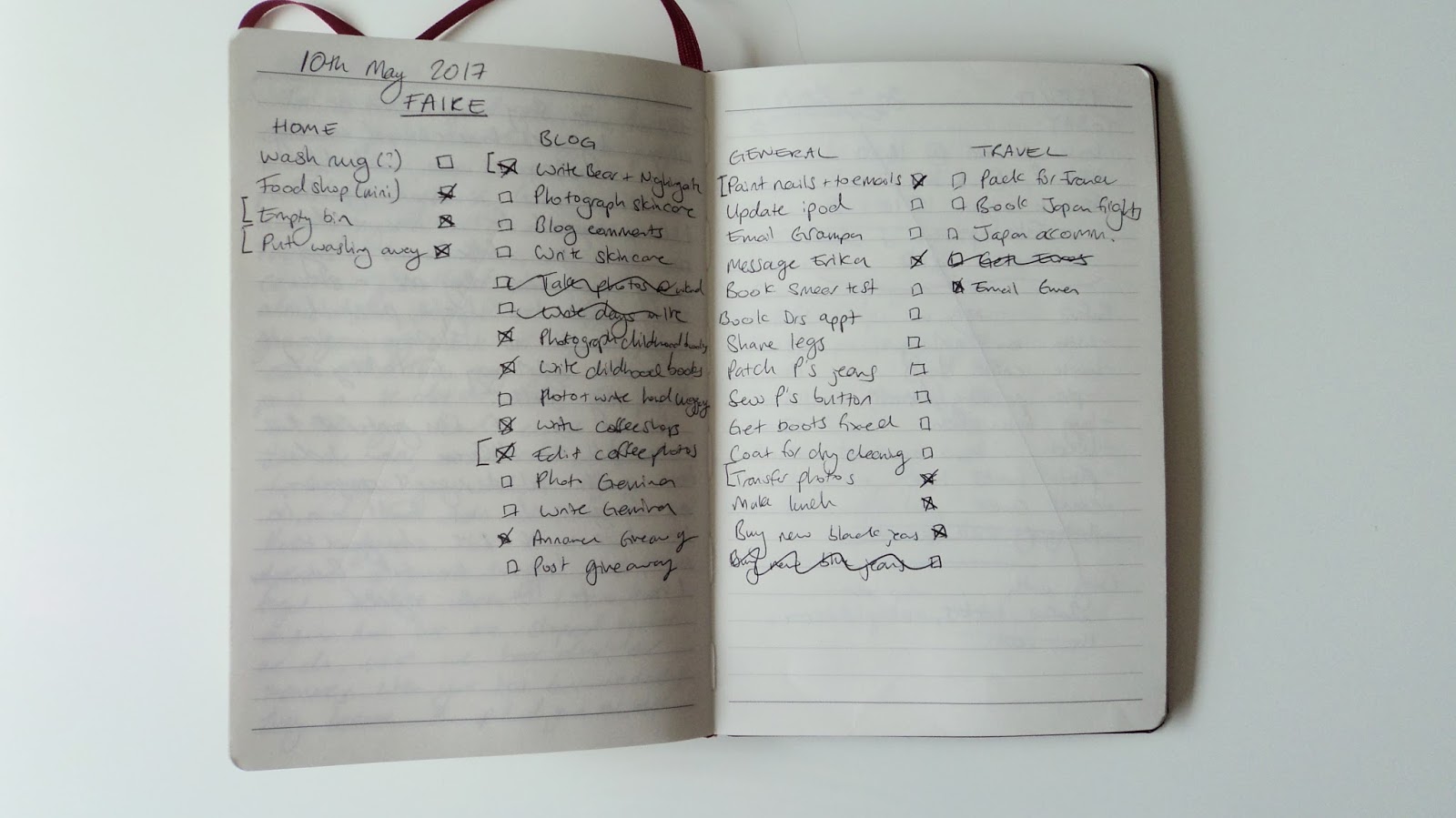 This was my packing list for several days in France, along with my plan, backup plan and backup backup plan for getting to the airport on time. I actually made it to the airport way earlier than I needed to be, resulting in me waiting for my brother to show up for half an hour so we could check in and I could finally eat something. 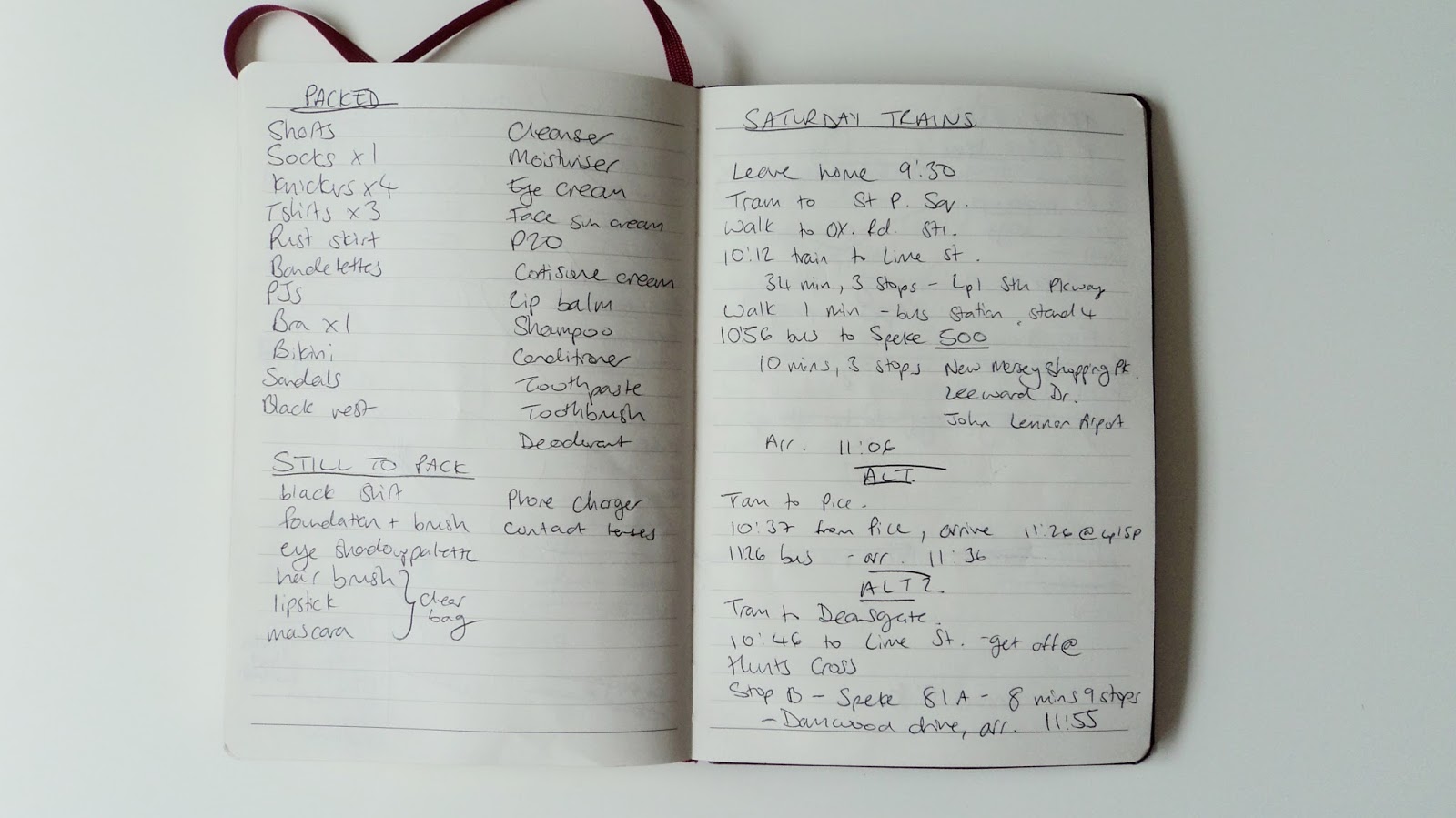 This is one of the last pages in my notebook. I recently purchased Madeleine Shaw’s A Year of Beautiful Eating cookbook and am loving it, but frequently find that when it comes to meal planning I can’t be bothered leafing through and deciding on recipes. Instead, I decided to go through A Year of Beautiful Eating and Anna Jones’ A Modern Way to Cook and pick out recipes I’d like to try at some point. It speeds up the whole process and makes planning meals a lot easier. 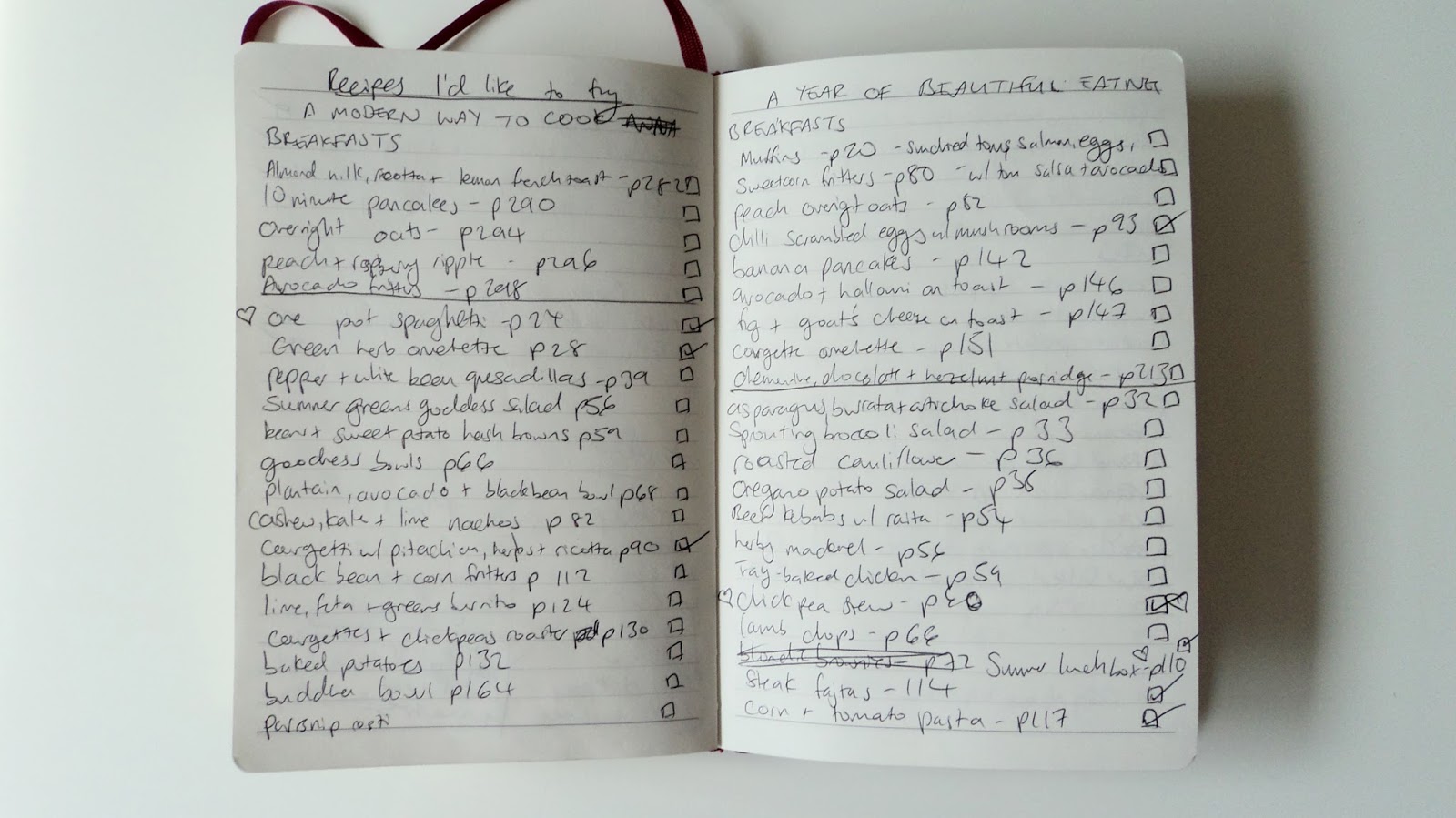 After that, there are just a few more to do lists which are pretty dull, so I thought I’d leave it there for this post. This notebook has been with me through the ups and downs and it was really cathartic to go back and read through it and see how I’ve felt and what I’ve been up to over the last twelve months. I do have other notebooks floating around, one of which will no doubt replace this one very soon.